Flour is a more or less fine-grained powder product, derived from the grinding and sifting of cereals, seeds or dried fruit.

The semolina it is a flour with a larger grain size where the individual components are rounded in shape and with little dust, as in the case of durum wheat semolina. Let's see what are the main general characteristics of flours.

> 1. Characteristics of the flour

> 3. The classification of flours 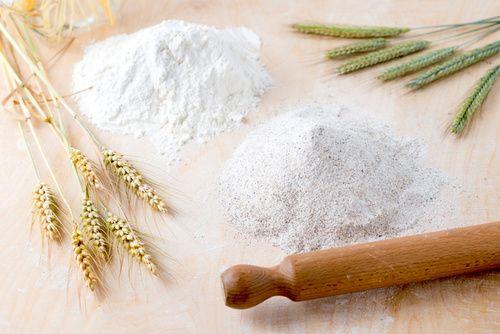 There are many types of flours on the market. It ranges from wheat flour, with rice flour; from corn flour, to almond flour; there is even the lentil flour and that of guar seeds.

Of ancient or more recent use, flour contains first of all important nutrients, proteins, vitamins, fibers, enzymes, starch, among others.

The flour is used to make pasta, bread, cakes, desserts, but it can also be a valid ally for the care of the body from the outside, or to make natural cosmetics do it yourself, such as shampoos, creams, natural peels.

The flour can be indigenous or have distant origins, depending on the origin and history of the raw material that underlies it.

The history of flour

Plants were used in man's diet already 30.000 years ago, and thus the use of grinding them to make a floury product.

Recent studies have shown that in fact, even then, man was not only carnivorous. A discovery in Tuscany showed that even in the town a food of vegetable origin was prepared based on Typha (cattail) flour, a plant typical of marshy areas.

So already then the man had learned to process a product and store and transport it. Not just any product, but a food rich in complex carbohydrates, indispensable for example to ensure its subsistence when the climate would become inclement.

The technical skill necessary for the production of flour and therefore to prepare a food, such as biscuits or farinate, was therefore something already acquired in Europe for a long time.

The classification of flours

In so many differences between country and country in production, the country, like all other states, has created a national evaluation scale of flours, according to different parameters. Let's see what this classification is based on.

First there is thesifting. It is an exclusive term of the milling industry, which indicates the percentage of the grain used to make a particular flour. To do the wholemeal flour, for example, the whole grain is used, and therefore the sifting is 100%, while to make the "00" flour sifting is 50%.

This value practically decreases as flours are obtained in which the contribution of the central part of the grain, that is the endosperm, predominates.

Another important parameter for measuring flour is force, indicated with the letter W. The strength of the flour is measured with an instrument called alveografo. Basically, this is the force exerted by the mixture against the pressure of the internal gases and must be evaluated according to its extension.

Mixing a weak flour with a strong one obtains an intermediate flour. In general, a flour with a higher W absorbs more water, withstands longer leavening and retains more carbon dioxide produced by the leavening itself. The flours used to pack bread will have a higher strength value than those used for biscuits, for example.


The industry that grinds wheat is called milling industry. Modern mills are organized into various sections, for storing stocks and ventilating them, for grinding them and finally storing them and then shipping them. For those who want to make flour at home, there are special machines, homemade grain mills, some kind of small mills that allow you to crush the grains and obtain fresh flour every day.

Our guides on flour

The cards on the flours that we have classified open the doors to new worlds, collect traditions from the past, allow you to know and experiment with new products and combinations of foods and to see their effects on the body.

A few brief notes regarding theirs property in fact, it allows us to understand who certain products are most suitable for, for celiacs for example, and when it is better to avoid them.