Copper: where to find it in food 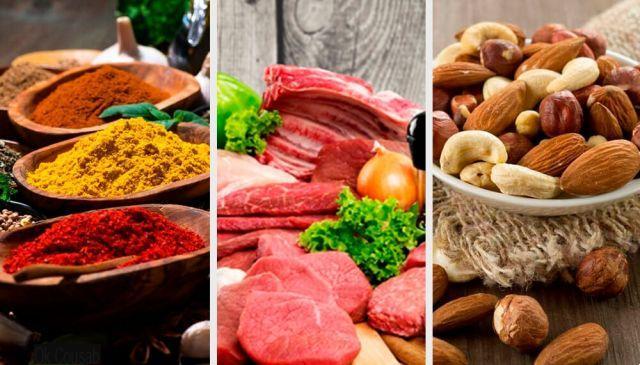 Il copper it is a metal essential for the survival and well-being of the organism, concentrated mainly in the internal organs such as liver, brain, heart, kidneys and in the muscles related to the movements of the skeleton.

Feed on foods rich in traces of copper it is important for maintaining various metabolic functions, such as the production of biochemical energy, the absorption of other metals (especially iron), the formation of collagen, and many others.

Despite cases of copper deficiency are very rare, there is a suggested average daily dose, which is 900 micrograms.

Cases of deficiency are mainly due to genetic defects which affect the correct absorption of copper in the body, or by excesses of intake of specific substances antagonists of copper absorption, such as ascorbic acid and zinc, to name two.

Copper begins to be absorbed from early infancy into breast milk, and in case of genetic defects related to its absorption with consequent copper deficiency, the symptoms are quite evident: problems related to proper growth, especially of the bones, predisposition to infections, premature osteoporosis, neuronal dysfunctions.

In fact, copper is linked not only to the functioning of various organs, to the musculoskeletal system and to growth, but also to neuronal development and therefore to cognitive functions.


Clinical studies show that incorrect exposure to breast milk as a child tends to create early neurodegenerative processes in adults.

On the other hand too an excess of copper is not recommended, as it tends to trigger oxidative processes that are harmful to various types of tissues.

Read also Copper and zinc supplements for hair, when to use them >>


The best alimnetary sources of copper

But there is no need to worry: unless you suffer from the aforementioned genetic defects (which is evident in the first weeks of life), that you did not suffer from malnutrition as a child, or that you are forced to a heavily diet restrictive for a long time, it is rare to incur copper deficiencies.

However, it is always good to know in which foods it is found, both animal and vegetable ones.

The best sources of copper in fact they are animals and the reason is soon said: as in the human being copper tends to concentrate in the internal organs and in certain muscles, it does the same in animals, which absorb copper from plants and store it in their own organs.

As mentioned, in fact, the liver is the organ where copper is concentrated most, so the liver of healthy animals is considered the best source of copper in nature. Beef provides between 13000 and 15000g per 100g, almost 20 times the daily dose.

The other internal organs of animals contain a little less. Brain, entrails, tripe, heart, lungs, etc. provide an average of 4000 micrgograms, about 4 times the daily dose.

Each mushroom has different amounts of copper but generally always quite high, due to their ability to absorb trace elements from the soil easily through mycorrhizae. 100 grams of undried and cooked mushrooms can on average give us around 1600 micrograms of copper.

The crab is the marine animal that concentrates the most amounts of copper. In 100 grams of its cooked pulp we can find just over 1000 micrograms.

As with crab meat, cashews offer us just over 1000 micrograms of copper per pound. Better to choose natural ones, that is, not roasted, unsalted, not spiced.

Lentils are the legume with the highest percentage of copper, especially the brown and orange varieties. In fact, we are talking about the recommended daily dose, about 0.9 mg, per 100 grams of boiled lentils.

Almonds can also be considered a good natural copper supplement, with around 800 micrograms per hectogram.

Finally, here is the black chocolate, which ranks last in this virtuous ranking, bringing about 600 micrograms of copper per hectogram.

There are also supplements to increase copper intake, but as said the cases of deficiency are so rare, as the internal organs are almost inexhaustible copper reserves, which are hardly prescribed. There are also foods enriched with copper, such as breakfast cereals and beverages.

Audio Video Copper: where to find it in food
Noni: properties, benefits, how to eat ❯

add a comment of Copper: where to find it in food