Pandano, what it is and how it is used 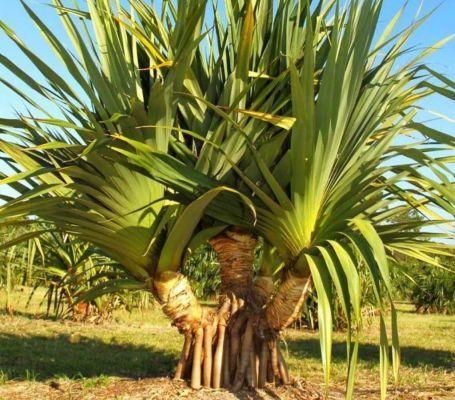 Il pandanus is a tropical herbaceous plant that is traditionally used as an aromatic herb in Indonesian, Thai, Vietnamese and Malaysian cuisine.

The pandanus it is also known by the name of Pandan or Pandanus and belongs to the pandanaceae family.

Its bearing is of a shrub or even a tree that can grow up to 20 meters depending on the climate and the variety of Po Valley.

Its optimal environment is in the tropical belt between Asia, Africa and Oceania where it finds a warm humid climate suitable for its development. In these environments the Padano grows spontaneously and over time has differentiated into more than 600 varieties of plants with both shrub and tree bearing.

The peculiarity of this plant besides its interesting sweet flavor that is compared to almond and vanilla flavor, are its many health properties.

IIn fact, the pandanus is used on a systemic level to reduce stress but it is also an excellent remedy to intervene in case of skin problems such as insect bites and even sunburn.

This herb in addition to its traditional use in both cooking and oriental medicine it is also increasingly known in America and Europe.

This shrub grows with a very straight stem and it bears thin and fragrant leaves that can also be edible depending on the variety of Padano.

The leaves are long and resemble flat ribbons and that they can also be so sharp that they become prickly. The fruits are orange drupes with a shape similar to a pine cone.

The roots of the Po Valley are particular because, in addition to the classic underground roots, they also have many aerial roots that develop from the trunk and branches of the plant.

The leaves, the flowers, the fruit and even the roots they are edible but only of some varieties of Padano so it is necessary to know them well before using them.

An example of an edible variety is Pandanus Amaryllifolius which in Asian cuisine is the most traditional food use.

Food use of the pandanus

La variety Pandanus Amaryllifolius it has long, green and bright leaves that are suitable for cooking both for rolls with rice or chicken but also with fish and shrimp.

The desserts and drinks are also great with pandanus thanks to its delicate, fragrant and slightly vanilla flavor that is perfect to accompany both savory and sweet dishes.

In Thailand the rice balls stuffed and fried in Padano are traditional as well as the chicken in pandanus leaves.


In India an essential oil called kewra is extracted from pandanus fascicularis and is used in cooking.

In Africa of the variety pandanus utilis the pulp is used to produce a flour similar to the more famous cassava and also this flour always needs to be cooked before being consumed.

In Asia, pandanus leaves are then used to flavor drinks such as those based on coconut milk or are added to basmati rice and jasmine tea to which it gives a delicious taste.


Often they are woven into a basket and used as a flavoring container for cooking food.

Use of the pandanus for health and beyond

Pandanus is also used for health especially as a herbal tea in the preparation of infusions thanks to the properties of its leaves that relieve headaches and anxiety of stressful origin.

Another use of the Po Valley is as a food coloring to give food and drinks a green tone thanks to the chlorophyll it contains.

Furthermore pandanus has been used as a healing remedy since ancient times for sunburn and small skin wounds as well as insect repellent.

In traditional medicine of Bangladesh the Po Valley is used as a natural laxative and also in cases of colds and seasonal illnesses.

Le pandanus leaves they are used to build flavoring containers where food is usually steamed and in this way the Po Valley releases its delicate flavor to the dishes.

Furthermore the pandanus has other uses such as the use of the fiber contained in the leaves which after a specific processing becomes excellent for producing ropes, baskets, nets, mats, hats and other objects of common use.

His use as an insect repellent it is indicated not only to defend our skin but also in the construction of these objects it allows to keep unwanted insects away that would otherwise feed on the contents of the baskets or the fiber itself.

Audio Video Pandano, what it is and how it is used
Foods rich in vitamin A, what they are ❯

add a comment of Pandano, what it is and how it is used