Press on a flat bench

How much do you bench press? In truth, it matters little, both for the fact that strength must always be contextualized in Bodybuilding, and for the fact that the flat bench press may not be as fundamental an exercise as it is believed. The dumbbell presses actually offer a valid alternative and indeed, for certain aspects and in certain subjects, a variant to be preferred. 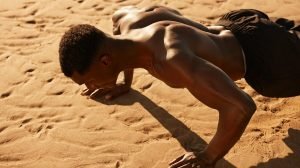 Two very boring lines on the anatomy of the pectoral, necessary to fully understand the arguments that will follow [1] [2] [3]. Specifically, we will focus only on the functions of the muscle. They are three:

This is the main function you see in the bench press exercise, what can be trivially referred to as "push" forward. This function is therefore prevalent in pushing exercises and can vary in terms of involvement with different angles (inclined, declined, etc.). It is in fact a function common to the anterior bundles of the deltoid which is, in fact, strongly involved, with angles greater than 45 degrees (in a manner proportional to the angle).

Adduction of the humerus

This is the typical function of the opening exercises (crosses, Flyes machine etc ..) in essence the humerus is approached medially (towards the inside of the body). This function is the one that allows a very strong involvement of the great pectoral as it is the main intervener. In other words, the synergistic muscles of this movement are always involved in a mild way, which makes it very effective.


Internal rotation of the humerus


Place your hand in front of you with the palms up, as if you were to place the dirty clothes to hang out (I don't know how it came to me, it will be that in the heat I do nothing but hang out washing machines). Now turn your palms down.

You have just rotated your humerus (and forearms) inside. We can observe this movement with specific executions of presses with the dumbbells, the barbell in fact would not allow such a movement. In the case of handlebars, however, it is useless as there is no force vector that offers opposing resistance.

In other words, if we put ourselves in the initial position, therefore arms up with the dumbbells and begin to rotate-extrarotate, we will notice that there is no fatigue in the movement except that deriving from having to keep the position taken stable.

We will return to these anatomical hints later to understand the advantages offered by the exercise, now let's analyze its execution.

For a correct execution of the bench press exercise we will have to follow the following steps [6] [7]:

1. Starting position with dumbbells up, shoulder blades adducted, back arched and feet firmly on the ground. We can get there by holding the dumbbells on our knees and helping with them as we lie backwards.

2. Go down slowly, forearm always under the handlebar, let's stop roughly when the elbow drops just below the shoulder height (the ROM will vary on the basis of individual possibility and flexibility). The palms should be semi-upset (dumbbells diagonally)


3. Go up, eventually going to intrarotate the humerus. An interesting variant is the one that instead provides for extra rotation. It is a non-physiological movement but not even a risky one with which many are able to benefit from a greater activation of the target muscle. It's about trying and checking.

4. The final point of the bench press exercise should not lead to joint lock (arm extended). This is for two reasons: firstly the risk of injury, secondly in this position it is lost in terms of muscle tension.

In the first place, using the barbell we do not have the possibility to adduce the humerus, therefore an important function of the Grand Pectoral is missing. Note that with the dumbbells not only is this movement minimal but there is no excessive resistance except in the last stretch of ROM (dumbbells at the bottom). From this point of view the advantage is there, it is present but small. A tip is therefore to use a variant.

It is a hybrid between thrusts and crosses which consists in carrying out a pushing exercise keeping the dumbbells quite distant and using a neutral grip. In this way, despite having an almost similar ROM, it is significantly modified in space.

In fact we will have a greater displacement in adduction (frontal plane) and a lower displacement in flexion (sagittal plane). This, in addition to increasing the effectiveness of the exercise, will lead us to an increase in work (levers and therefore the moment of greater force) which will be reflected in a lower load used.

The advantage is to increase the tension (ie the moment of force or torque) in a simpler stretch of the movement and to decrease it in the most tiring stretch. This will also allow for the pectoral to work in adduction (at least in the negative phase of the same) and to give space to this stimulus as well.

Another advantage of using dumbbells for flat bench presses is to allow for greater physiology of movement. This is mostly recommended for those with postural or muscular asymmetries. In these terms, working freely between right and left will make it possible to recover any asymmetries and to have a more physiological motor pattern thus avoiding injuries (this advice also applies to pushing for the shoulders).

The last advantage of the flat bench press is that of injuries, certainly, with the use of dumbbells, the risk is lower (in terms of “staying under the barbell”). This advantage disappears if we are assisted by a spotter but it is always worth considering. Accidents are part of the game, it would be stupid to ignore them.

We can conclude by saying ..

1. In the event of a lack of the pectoralis major compared to the other muscles, it will be better for us to choose the flat bench presses with dumbbells or the variants proposed above. Therefore, reduce the work with the barbell bench press.

2. In the event that we have few chest exercises to be included in our programming (eg we have to make a recall), then focusing on the dumbbells is definitely a winning choice as we will maximize the effectiveness of the little work done.

3. In all other cases I always recommend a variation of the work and cycling of the same [4] [5]. Let's not dwell too much on one exercise, this applies both to the use of the barbell (and the religiosity with which the "big three" are used and always inserted in any case) and to the use of dumbbells (useful, but not if must abuse it). As usual then .. Mix it up!

add a comment of Bench Press | Execution and benefits