Share The Meal, the app to donate a meal 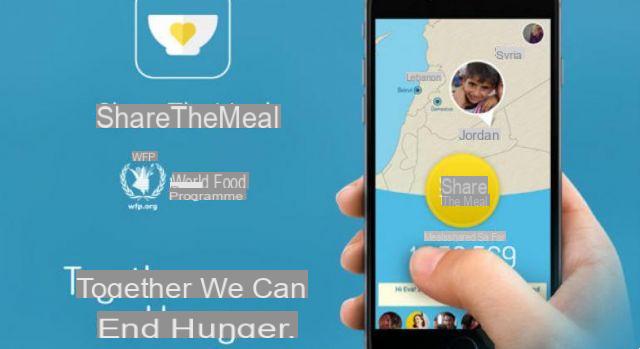 70 cents and a click to feed a hungry child for one day. An opportunity that Share The Meal - an initiative of the United Nations World Food Program - offers those who want to contribute, with a small gesture, to reach the goal of zero hunger in the world.

According to a recent document published by WFP, there are 690 million people in the world who do not have enough food to lead a healthy life. In the face of an increase in conflicts, climate change and situations of economic instability, the hunger rate has started to rise again, after years of decline, on a global level.

Share The Meal is located in this context with an ambitious goal: share 800 million meals over the next five years. As stated on the website dedicated to the project, the intent is “to ensure that every child has regular access to food and to achieve a world of Zero Hunger. Together ”continue the promoters of the project,“ we believe we can be the generation that will put an end to hunger in the world ”.

Share The Meal, what it is and how it works

Share The Meal is an application for smartphones and tablets, which allows people to "share a meal" with children in need.

The initiative is promoted by the United Nations World Food Program, a humanitarian program that reaches over 86 million people with food assistance every year in 83 countries.

Originating in Berlin in 2014, the idea of ​​Share The Meal stems from the belief that “more and more people would be willing to help and donate if there was a simple and direct way to do it”. Since launching in 2015, its community has been continuously and constantly growing.

To join the project and help fight hunger in the world, simply download the app on your device and proceed with the € 0,70 donation. Of these, 62% is destined to feed families in need directly, 28% is invested in fundraising, 6% is used for the management of the organization and 4% covers the commissions related to payments.

The app offers several functions, including the possibility of setting up a “team” - that is a team of people who support a project or a family - or of achieving particular objectives and goals through the proposed “challenges”. All with a single primary purpose: to do everything possible, all together, to fight world hunger.

ShareTheMeal donations support different WFP operations, ranging from programs for building climate and food resilience, to food assistance during emergencies, to the distribution of meals in school canteens in low-income countries.

Since the app launched in 2015, donations were used to help mitigate some of the most dramatic food crises in the world, in Syria, Lebanon, Yemen and Nigeria.

If desired, within the application it is possible to select the countries to which to direct your aid.

Over 97 million meals distributed in 31 countries by around 4 million users. The results achieved by the Share The Meal community - constantly growing since it was founded - have brought the application several awards and recognitions.

The Table is a community within Share The Meal, which allows users to make a monthly donation. In exchange for their support, the program informs members of the positive effects of their choice through updates and stories about the family they are associated with.

In fact, each monthly donor is virtually matched to a specific family, who will receive food assistance from WFP.

One more way to reaffirm - month after month - one's commitment, with the awareness of offering concrete help to people whom physical distance does not make less real.