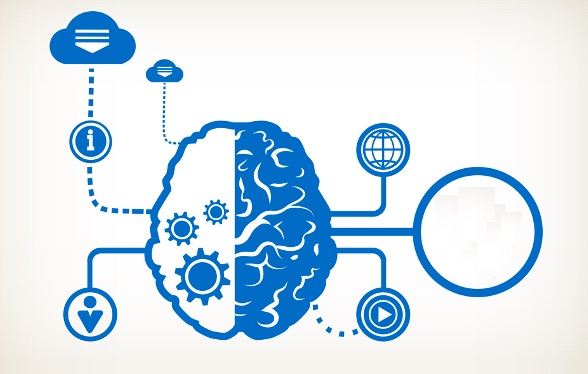 What are Concept Maps?

According to Joseph Novak, who invented them, concept maps are tools capable of organizing and representing knowledge.

These are two actions, organizing and representing, which greatly facilitate the analysis of information and the acquisition of new concepts.

However, there is a problem.

Use these tools  has a cost in terms of time and energy: whether it is with pen and paper, with a computer or with an App, it takes hours and hours to build a concept map that is at least significant.

By the way, concept maps are certainly not the only option available to you: there are also summaries, schemes, mind maps, flashcards….

If, for everything you have to learn or analyze, you start using all these tools, the risk of not making it through lack of time is enormous.

In this article I will then clearly state my opinion on concept maps, explaining why they are made, how they are built, what is their effectiveness and what are their limits.

At the end of the reading you will know if, when, how use them.

How a concept map is made

The concept map is presented as a diagram of information that develops as a tree from top to bottom or from the center to the outside.

Their purpose is to organize knowledge in a hierarchical way related to one or more themes, showing the logical links between concepts.

As mentioned, the one who introduced this tool is Joseph novak, scholar of learning processes, researcher and professor emeritus at Cornell University in New York.


The same university that produced the note-taking method that I always recommend to everyone, students and non-students.

What are the main features of concept maps, according to Novak?

All the elements listed above define a concept map and distinguish it from other similar tools.

For example, if we wanted to make a concept map of the following passage:

“Napoleon Bonaparte was born in Ajaccio, in Corsica, just over a year after the stipulation of the Treaty of Versailles of 1768, with which the Republic of Genoa left a free hand to France in the island, which was thus invaded by the armies of Louis XV and annexed to the king's personal estate. The Bonaparte family belonged to the petty bourgeoisie ran and had perhaps distant noble origins Genoese.

Napoleon's father, Carlo Maria Buonaparte (Napoleon changed his surname to "Bonaparte" after the death of his father, a few days before marrying Giuseppina and leave for the campaign of Italy, to make it more suitable for the French language), was lawyer, graduated at the University of Pisa "


The concept map of this simple text would look something like this: 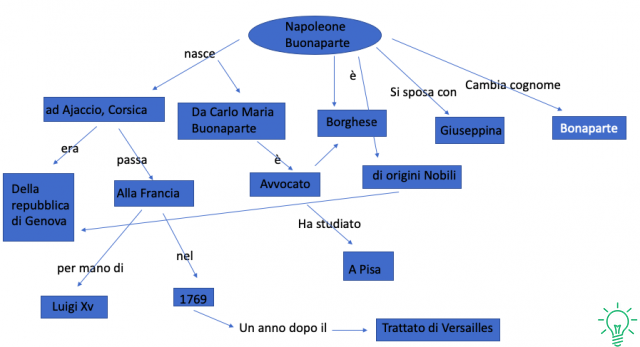 As you can see there are a number of interesting things:

But, now that we have seen what it looks like, let's see the logical steps that lead to building a concept map.

How to build a concept map

Developing a concept map may seem complex, but with a little practice you will be able to do it without major problems.


Joseph Novak himself in one of his publications gives indications on the creation of well-made conceptual maps. Its instructions are, in summary, these:

Uses and benefits of concept maps

As the name suggests, the main strength of this tool is its ability to clearly show the relationships between concepts. By doing so, it allows you to have one overview of a given theme, reflect on it and quickly retrieve information concerning him.

These characteristics make it perfect for reworking and representing the conceptual parts of an exam.

Of course, this synthesis can take place at various levels: if you limit yourself only to the main concepts you can reduce an entire manual to a single concept map.

If, on the other hand, you go into the secondary, tertiary and detail ones, a dozen notebooks may not be enough for you (which, as we will see, is the main limitation of this tool). For example, the short passage on Napoleon eventually took up a fair amount of space.

In short, it is a powerful means to understand a topic and develop their own elaborations on it.

For this reason, concept maps are widely used even outside the scope of the study by all those who have to do problem solving or have to develop plans of a certain complexity.

The limit of this tool is inherent in its very name: it serves for concepts and little more.

Using a concept map to try to learn data and details not only goes against the way they are organized but it also is very long and not very profitable.

Therefore advise them tout court for the study, as some do, in my opinion it is fundamentally a mistake.

I am thinking, for example, of my university, medicine: we had huge exams, in which the conceptual part was not small, but in% it was perhaps a tenth of the whole exam.

For some exams, even less.

But the same can also be said of the example of Napoleon that we have just seen.

It is a very simple text, but in any case the details to learn are not few. Using a concept map to do this would be just absurd - it would take too long.

And I think the same can be said for most of the exams in most of the higher level degree programs: concept maps can be used to study maybe 10% of the program. The most complicated part, the one on which we need to reflect a little more.

But for the other 90% of simpler data, information and concepts, where the reflection / memorization ratio is definitely unbalanced towards the latter, Concept maps are not only useless, but harmful.

Also because you would find yourself producing a lot of material, which would make it more difficult to review.

Review that instead must be done on material that is as synthetic as possible. And the concept maps, if you expand them to the level of detail, are the least synthetic there is.

Finding tools that allow you to build real concept maps on a computer or tablet is not as simple as identifying those for mind maps (we'll talk about them in due course).

The reason is that Google is also a bit confused on the subject and uses the two terms almost interchangeably. For this reason I will soon clarify the difference between the two types.

However, one of the possibilities at your disposal is to use a tool for mind maps - especially if you are already used to using them - limiting yourself to the tools that are used to generate the conceptual (in the end, arrows, rectangles and ellipses are found in every tool of this type).

Or you can rely on one of those I am about to illustrate to you.

The first is Cmap, developed by the Florida Institute for Human & Machine Cognition e based on Novak's theory in person. It is a real program to download - completely free of charge - on your computer or iPad and therefore usable offline. With Cmap you can create mind maps just like the ones I described earlier and you have the possibility to enrich them with colors and images.

Another tool is Lucidchart, available both in free version and - with additional functions - for a fee. The maps it allows you to create are similar to those of Cmap, but this software also gives you the ability to work as a team on the same project at the same time. A useful function for joining forces with your classmates, and building summary diagrams of the exam material together.

If you prefer not to download anything but work directly online, you can opt for Creately, for a fee or for free with the usual small limitations. Besides the ability to collaborate with others, the beauty of this tool is the wide choice of templates already ready. If you find someone you like, all you have to do is select it and fill it in each time with specific information.

If you prefer more traditional methods to technology, nobody forbids you to equip yourself with paper and pen and bring your concept map to life the old-fashioned way. The first few times, to gain confidence, use the post-it technique that I suggested a little while ago: you will see that you will learn quickly!

As I mentioned earlier, concept maps and mind maps are not the same thing. Often, however, the two terms they are confused or used interchangeably to indicate a generic summary of a certain topic.

If the concept map is a diagram that organizes the notions related to a theme in a logical and hierarchical way, the Mind Map what's this?

It is always a schematic of concepts, which however are connected by association and represented by images and colors rather than words. This second tool it is suitable for brainstorming because it stimulates creativity and intuitive thinking, as opposed to concept maps which are based on rationality.

Understanding the difference between the two is crucial. Not because you have to choose your favorite, but because by knowing them thoroughly, you will know which one to use at the right time. However, soon, in one of the next articles, we will also talk about them.

I continually read on the network of sites that enthusiastically recommend concept maps as a solution to study problems, inviting the reader to start producing them with his head down.

Nothing more out of reality, at least in my opinion.

Concept maps are a great tool for:

Instead, using concept maps systematically for your next exam in law, economics, medicine, engineering, and so on, in my opinion, is absolutely a waste of time.

But, in the end, it's not the instrument's fault. The same name, conceptual maps, in fact it shows us very clearly what they are for. The misunderstanding arises due to the fault of those who recommend them to also store data and details!

Mind Maps: Pull Out or Put In? ❯

add a comment of Concept maps: the big misunderstanding