No one has ever taught me to…. 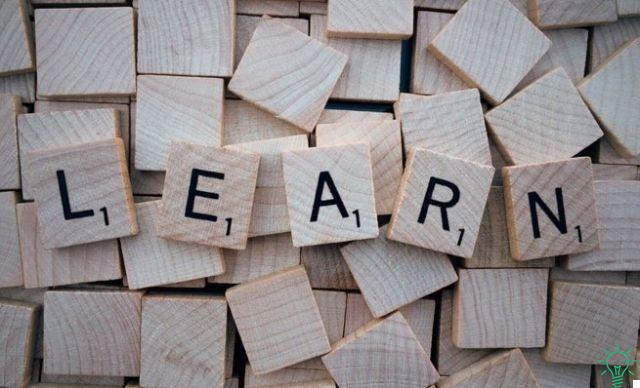 Today on the blog de GetPersonalGrowth I host Issac Robledo, psychologist and author of several bestsellers in English and Spanish.

Although we have been emailing Issac for years now (we are part of a private group of Amazon authors, and we talk about similar topics), only this year we finally managed to meet in person!

Among other things in Puerto Vallarta, Mexico, where I was for a wedding, and he for work.

In front of a beer, on the beach, the project of his today's intervention for GetPersonalGrowth was born.

An intervention for which I particularly thank him: not only for the vision of the things he brings us, but also for the gift he gives to readers.

Think about it ... When you were in elementary school, did someone teach you to learn?

What about the rest of your course of study?

Of course, maybe here and there you have collected some tips or advice in a disordered way, but no one has ever given you one course solely focused on improving your learning skills.

Yet, whether you are still a student or not, you have to constantly learn new things!

And therefore "knowing how to learn ”is probably the most important skill in which it would be worth being good.

But the school does not teach us. It just fills us with information every day, leaving it to us to find out how to learn it.

And therefore it is possible that a "poor" student is actually a student with great potential, which would emerge easily if someone taught him to develop it.


This is a real shame, and it makes us understand that we must be the ones who personally take the initiative to understand how to learn.

And it's not just a question of grades at school ...

Prepare for the world of work

You see, now the world is changing at a speed never seen before.

And so the TOMORROW that the school tries to prepare us for will actually be so different that much of what we learn TODAY will be perfectly useless.

Funny isn't it? You put a lot of effort into learning things you won't need!

On the other hand, if you first learn how to learn, and apply its principles seriously, you will have a huge advantage in everything you do, and you will never lag behind the world that runs.

In addition, reflect for a moment on the work you will be doing: once upon a time, you learned one and only one thing, and it it became a lifelong job.

Now, however, in most fields, this is a dangerous strategy, because to work effectively it is necessary to possess and know in depth different skills.

In my seminars, students often ask me "but how many things do I have to become good at?"

So, to give him a concrete goal, I reply "Start with three. Three areas, possibly related to each other, in which you must become masters! ”.

But in reality, in fact, it is only the beginning, and there is no reason to stop at three.

Instead, we must always be ready to take advantage of new learning opportunities. Because you never know how they can come in handy in the future.

To better explain what I mean, then I want to tell you something about myself, "using" myself as an example.

How did a psychologist become a bestselling author

During my college years, I devoted myself to psychology, which is the subject in which I graduated.

Subsequently, I took a master's degree in the psychology of industrial organizations.

And in the meantime I have cultivated in a serious way, that is by studying and trying on the field, my passion for writing and my interest in business and social and economic sciences.

The result is that I managed to launch my career as a writer on my own, becoming very successful theeditor of myself.

Which, when I started psychology, I didn't dream of doing even in the most hidden of my thoughts!

And what have I mostly written about?

Well, obviously about what I knew from studying it at university: psychology, personal growth, and topics related to the mind / brain binomial.

Doing all this would not have been possible if I hadn't become an expert in 3 areas at the same time: psychology, writing and business (especially the marketing part).

Areas which, among other things, are much more related than it may seem at first glance.

But even now, at this very moment, I am studying new things.


Obviously, some of the latest discoveries and research in the field of learning psychology. But not only.

Because even for a writer, there is always a new editing software to learn, a new social network to promote, a new productivity tool to use.

At least if you want to work efficiently and productively.

But I can understand that not everyone is enthusiastic about having to study forever….

Studying forever? Basically it's not bad

I think that, especially if you are still a student, you are more than convinced that learning to learn is essential.

However, studying is often so boring that thinking you have to keep doing it forever makes you demoralized.

But… Could it be that studying is boring just because you study badly?

You see, I want to tell you that learning to learn has three great advantages, which help you to make studying more enjoyable, satisfying and profitable:

Let's briefly see them one by one.

Understand faster and save time

I'll give you an example: if you already know a thousand words of a foreign language, it is easier to learn the other thousand.

You will indeed have learned of the patterns and each new word will seem more familiar to you.

This is very typical: a good student gets better and better, because each new knowledge is stratified on the previous ones in a solid way.

The opposite happens to a bad student: as the complexity of a subject expands, the weak foundations make it increasingly difficult to move forward!

You avoid frustration and learn not to give up

This is particularly important for those who have started their studies poorly.

Maybe, already in elementary school they told him, in fact, "who weren't good students ".

And in this there is often a lot of responsibility on the part of the professors, who have reinforced this idea of ​​theirs, instead of helping them overcome it.

Moreover, without ever explaining to him what they were doing wrong.

The result is that a poor ability to concentrate and learnwhich is also very common in a 6-year-old child, it becomes a habit that these people carry with them forever.

They simply convince themselves that they are bad students, and they remain so forever.

But believe me, after years of studying psychology, and more generally the mind, I can say that, practically, there are no bad students.

On the other hand, there are students who do not have a study method and who are unable to concentrate.

If you think you are a bad student, then make the effort, for the first time in your life, to learn to learn. It will be tough at first, but then I promise you will surprise yourself and how your performance will change.

And not only that: this experience will teach you not to take anything for granted, and not to give up.

Connect all the information into larger "drawings"

The more you focus on learning, the more things you discover and know in very different fields.

And that's when you start "connect the points“, That is, to see relationships that you did not imagine, even between things that are very different and distant from each other.

Studying will then become exciting, because you will make real "discoveries": each new information will then give a more complete meaning to the information you already know.

I. C. Robledo is an internationally bestselling author who received his B.A. from Purdue University in psychology, and his M.S. from the University of Oklahoma in industrial-organizational psychology. His books are meant to help readers build their intellectual, creative, and mindful abilities

Neuroplasticity: How We Can Change Our Brains ❯

add a comment of No one has ever taught me to….