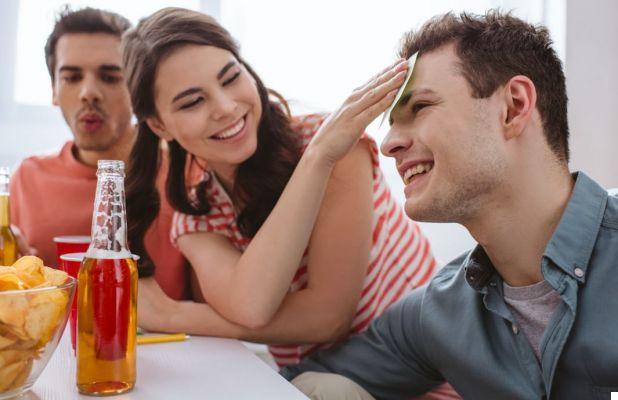 One of the examples that almost everyone gives me, when they tell me they have a bad memory, is "can't remember names of people who have just introduced me ".

But if, as CG Jung said, the name is the essence of a person, remembering someone's name is more important of what it may seem to you.

Come back for a moment with your memory to one of the many times when someone has forgotten your name, has crippled it, called you with that of your seat neighbor.

It gives a subtle annoyance right?

It is normal: your mother calls you by your name when you come into the world and it is the first word whose meaning you recognized, learning to identify it with yourself.

And in fact, if you call a 4-5 year old child with a name (or nickname) that is not his own, unlike an adult he often shows all his disappointment.

We are used to saying 'my name is' but in reality it is the others who call us (Raffaella Grasso, Psychotherapist, listening emotions).

I remember well the teacher of a post-graduate course I attended many years ago.

At the first lesson, he made the rounds of all our names once only, in short, the roll call.

I think there were at least sixty of us in the classroom, yet already from the second lesson onwards he reminded us one by one.

Not only was it an impressive display of mental capacity, but it immediately created tremendous empathy with all of us.

Today I will teach you the "trick" that my teacher used, so that from now on you will only forget a name if you want to.

Why we forget names.

When you first meet someone, your brain reacts as it would a Pleistocene caveman.

You must know that in those days it was not customary to make presentations at aperitif time.

You just knew the people of your little tribe, and when - very rarely indeed - you ran into someone new, you concentrated:

For these reasons, when you are with the glass in your hand and you are introduced to someone who immediately tells you their name, you tend to pay very little attention to his words.

Furthermore, since the name at the end is an abstract entity, it is inherently harder to remember than words like apple or dog.

And so you forget it immediately, or even you don't even memorize it, as if, while your interlocutor moved his mouth to speak, you in fact hadn't even heard him.

Instead, you may have noticed that when you talk to someone for a few minutes and then it tells you the name, here it is magically your chances of memorizing it increase dramatically.

In reality, therefore, many times, the problem is not that I don't remember a name.


It's just that you haven't even memorized it in the first instance, because you were focused on something else.

Mnemonics help you to raise your level of attention.

Remember names by associating them with faces or bodies

The process of memorizing names (and even surnames, if necessary) by associating them with faces or bodies is very simple.

First, associate an image with the name you are told.

For example, if you are introduced to someone named Francesca, you can associate the image of the Eiffel Tower, the symbol of France, with this name.

This first step is already fundamental in itself.

Transform the name into an image that evokes it activates your synapses in a powerful way, forcing you to immediately raise your level of attention.

Then, locate on the face or general appearance of the person, something that strikes you about her.

It doesn't matter if it affects you positively or negatively, the important thing is that you see it as one of its characteristics that stands out among the others.

Each person has one or more of them, which is easy to notice when you look at them caricatures.

At this point you need to create the link between this feature, which identifies the person for you, and the Eiffel Tower, which represents his name for you.

Depending on the feature you have identified, you will see the tower sprout from her nose or hair, on a cheek, between her teeth like a salad leaf ...


Once this link is created, not only will you not forget Francesca's name for the whole evening, but you will probably be able to recognize her even after a long time.

Once you recognize the face in fact (and the faces, albeit with some exceptions, remember much better than the names), it is easy to notice again the detail that struck you and with it the associated image / name.

Go to Amazon to see my manual

Remember other details of the person

Let's say you want to remember, in addition to the name, also the surname or telephone number or profession.

To do this, use the segmentation technique.

That is, identify some segments or sub-loci on the first image (go to the article on the mental palace if you don't know what I'm talking about), the Eiffel Tower, and then associate one or more of the following information in each of them.

For example, if Francesca's surname is Manzana, it might occur to you that Manzana in Spanish means apple.

So just stick an apple in the colors of the Spanish flag on the top of the Eiffel Tower.

Or, if you don't know Spanish, you could skewer a Manzo.

Doesn't exactly match the surname, but what you need is a clue, not necessarily the full surname (you can find an explanation on how these clues work in the article on the keyword method.

On a subsequent segment of the tower, for example the base, or the internal lift, you can then associate other information, such as:

Sheldon: How about this name for our app? "Hobbyist Equation Solver with Optimized Numbering Optimized Differential Limit".

- Raj: The initials of the name give Sheldon.

- Sheldon: But don't tell me! What a nice coincidence!

If you rarely need to memorize people, what you've seen so far is enough

From time to time you will happen to be introduced to someone and then you:

This will be enough for you to confidently call him by name at your next meeting, even a year later.

How to remember the names of many people

On the other hand, when you meet a lot of new people all the time, it can be worth building yourself up a little code for the most common names.

This way you can be much faster and more accurate.

In fact, there is a big difference between having to convert a name into an image from scratch or make it correspond to a specific image already present in a pre-established file.

Of course, you have to invest some time in advance in building the file. But in the end, believe me, it's not that long.

Once you have coded 60-70 of the most common names, you will be able to use their images to instantly associate them with 90% of the people you meet.

I'll give you some examples to clarify how:

And so, when you meet a Marco, or an Alessandra, or a Francesco, you won't have to create an image that reminds you of the name from scratch.

Instead, you will focus on some physical detail that strikes you and you will associate with it the image that, according to your pre-established file, identifies their name: a coin, a book, the Eiffel Tower.

My teacher, you may have understood it, to remember all our names after having made the roll call once, used just this system.

Why remember names through faces and bodies?

The appearance of the stability over time it is essential if they are people you think you will meet again.

If, on the other hand, it is someone you will probably never see again, you can also use, in addition to the face and physical characteristics, other details, such as clothes, shoes, accessories and jewelry.

In short, things that one wears today and maybe not tomorrow.

This broadens your possibilities and makes you faster.

It is always worth remembering a name

"Giving a name to an individual means giving him an identity, distinguishing him from all the others ... it is the symbol of the essence of a person and therefore has a magical quality" (Raffaella Grasso, Gerhard Adler)

Remembering the names of those you meet is what I call "a little super power".

A mental ability which forces you to start every meeting in an active way.

At its base there are attention, quick reflexes and imagination, universal qualities that serve far beyond the simple memory technique you learned today.

Tomorrow or in a week, when you meet someone new, try to memorize them with mnemonics to remember the names, you will see that it is worth it.

How to stay focused on the important things ❯

add a comment from How to remember people's names