Fear of making mistakes: How to overcome it 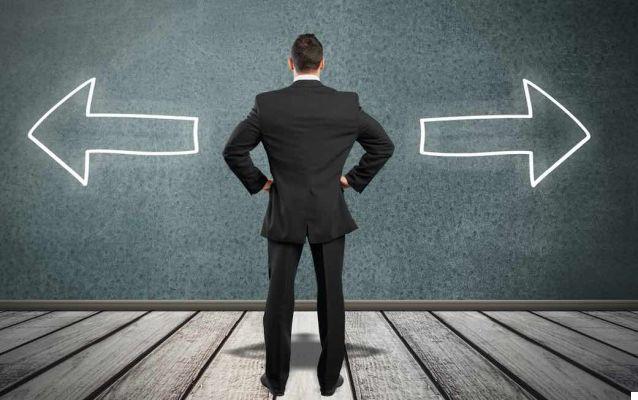 There are many different ways of expressing the same sensation that we have all tried at one time or another.

Within certain limits, the fear of making mistakes it is a blessing: it acts as an ancestral defense mechanism, which keeps us from doing stupid, reckless, dangerous things.

In short, things that, a few tens of thousands of years ago, would have led us to be eaten by a saber-toothed tiger or to be removed from our tribe (which, in those days, almost always meant certain death).

However, it becomes a problem when:

What causes the fear of making mistakes

As we have seen, the fear of making mistakes first of all, it has an ancestral component: we have it written inside and it has the function of protecting us.

However, two fundamental institutions for our psychological development can contribute to exacerbate it: family and school.

Some parents are so overprotective that they simply avoid exposing their children to the risk of error, continually paving the way for them in every activity.

When these children they grow up and encounter the first difficultiesnot having learned how to react to them, they suddenly discover the fear of making a mistake. And, to avoid it, they never leave their comfort zone, that is from the area of ​​things they already know how to do.

Other parents, on the other hand, at the other extreme, they are too demanding and judgmental: in this case the child learns the fear of making mistakes from an early age, regardless of how good his results are, a low self-esteem.

Even the school, in this educational disaster - often done for a good purpose - puts its own.

In fact, academic success is mostly measured with good grades and therefore errors are, by definition, to be avoided.

And so “We raise generations of kids who are terrified of making mistakes. From failing. Or even just from having to sit in class for a few minutes without knowing something. But if students are afraid of making mistakes, they are also afraid of trying new things, of being creative, of thinking differently ". Alina Tugend, author of Better by Mistake: The Unexpected Benefits of Being Wrong

But how is the problem of the fear of making mistakes solved?


Well, reflecting on its main object: the error.

In praise of error

There are mistakes that can have dire consequences, equivalent to being eaten by a saber-toothed tiger. Fortunately they are a very small minority, and it is to defend ourselves from them that, as mentioned at the beginning, we have developed the fear of making mistakes.

Outside of these cases, the much feared error is basically a positive fact, for at least three reasons:

Making a mistake is a sign that you are "training" well, that is, at the limits of your possibilities.

In my life I have missed more than nine thousand shots, I have lost almost three hundred games, twenty-six times my teammates have entrusted me with the decisive shot and I missed it. I have failed many times. And that's why I won it all in the end. (Michael Jordan)

It really just gets better when you commit yourself to the limits of one's own possibilities, or at levels at which making mistakes is easy:

Those who set themselves the goal of never making mistakes can only live below his talent.


Being wrong is the most efficient learning mechanism there is

This empirical observation can be easily explained by looking what happens in the brain in both situations.

There are tests, for example PET / CT, which show - through chromatic representations - i different levels of brain activity in response to different psychological stimuli.

If, with one of these tests, you look at a brain that has just been right, you see a series of areas that discreetly increase their coloration: these are a limited number of neurons and synapses, mostly related to the areas of gratification and positive reinforcement, which celebrate your little success with a mental "hurray".

On the other hand, when you look at a brain that has just been wrong, it will appear to you - if you compare it with the hurray seen in the previous point - as the entire curve of a stadium that shouts bad words.

The fact is that, when we make a mistake, our brains start firing electric discharges and neurotransmitters in full throttle, triggering very powerful emotional, cognitive and feedback mechanisms, the purpose of which is:

It is for this reason that, in many professional sports, athletes watch their competitions in slow motion: they are looking for mistakes to learn from.

And it is for this same reason that I always recommend students to start memorizing or doing exercises long before you have achieved complete preparation.

In this way they will make mistakes much more often and, as a consequence, they will start remembering much earlier and much better.

The active recall technique, but also the flashcards, rely heavily on the acceptance and correction of errors as a tool to memorize more quickly.

Making a mistake is the prerequisite for creativity and discovery.

Isaac Asimov liked to say that

The Most Exciting Phrase in Science Is Not ‘Eureka!’ But ‘That’s funny …’

That is, the most exciting phrase in science is not "I found", but "Hey, how strange ..."

By this, the great writer meant that behind an error, behind an experiment that does not give the expected results or an observation other than what was expected, often a discovery is hidden.

Whoever is afraid of making a mistake gets stuck in the face of surprises and uncertainties.

On the other hand, those who are not afraid of mistakes, in the face of surprise and doubt immediately activate the antennae of their curiosity and start trying to understand what went wrong ...

Often, this curiosity is rewarded by the great joy of discovery.

And I'm not just talking about science, but also about everyday life: error always stimulates us to seek the truth more deeply, opening up possibilities we hadn't thought of.

Overcoming the fear of making mistakes

Maybe you spent years, at school, flattened on the desk with the fear that the teacher would call you and not find you with the answer ready.

Maybe no one has ever told you that, unless you get eaten by a saber-toothed tiger, there is nothing wrong with making mistakes.

And so, even today, in a business meeting or in an educational laboratory, you find yourself not expressing your doubts and ideas. for fear of making mistakes and being judged negatively from others.

Or, even worse, you have given up on your desires for fear of not being up to them.

If so, the time has come to rebel against this way of seeing things, and to stop once and for all being afraid of making a mistake.

Well, with a complete mindset change.

As we have just seen, mistakes are more often than not something inherently positive.

So if, until yesterday, you worked hard to avoid them, from today you have to commit to committing at least a certain number of them!

Not deliberately, that is, making a mistake on purpose, but tackling tasks that are at the limits of your abilities, and in which therefore the error is around the corner.

Of course, I'm not talking about “saber-toothed tiger” situations, which can be harmful to you or others.

But of all those situations in which the error, if you look closely, it does not justify any real fear.

Are you a perfectionist student who only shows up for an exam if he is sure he will pass it?

So set yourself the goal, this year, to fail at least once. Look, I'm not joking: in my article “Do you postpone your exams? Maybe it's because you study too much ”, I really talked about why accept that an exam can go wrong multiply the chances of graduating quickly.

Don't give an opinion if you're not sure everyone's approval?

So give yourself the goal this month of dissatisfy with your ideas at least 2-3 people.

Would you like to write a book but you don't do it because you don't feel up to it?

Set yourself the goal, this year, to have the person you fear the judgment of most read something of what you wrote.

The scheme that you will have to follow is a bit that of systematic desensitization, a behavioral psychology technique that helps to overcome fears and phobias: you gradually expose yourself to the stimulus that frightens you, so that it progressively loses power over you.

And so, as those who are afraid of dogs must gradually learn to have them near, who is afraid of making mistakes he must slowly learn to make mistakes.

In this way you will free yourself from many fears and you will be able fully enjoy all the magic of a successful mistake.

A greeting and see you soon. Anthony.

Pause for reflection in love: what is it and how to behave ❯

add a comment from Fear of making mistakes: How to overcome it