What sewing a button taught me about success and the importance of practice. 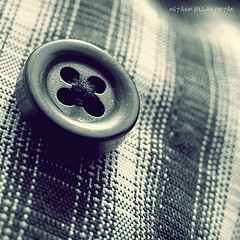 "All things are difficult before they become easy."

Last week in the office, taking off my jacket, I lost the button of a shirt cuff: the drama.

In 29 years of life (I admit it publicly with some shame) I have never sewn a shirt button: do you want mom in the past, do you want girlfriend or cleaning lady more recently, I've always dodged this chore.

The fact is that I found myself on a Saturday morning with needle, thread and youtube video for instructions!

This little experience as a desperate housekeeper made me reflect on personal growth, success it's a inconvenient truth which we often prefer not to tell each other, but which is the only real secret to being successful and making our dreams come true.

Do you want to know how I felt with needle and thread in hand? A total clumsy.

I swear to you, if I had filmed the scene, it would have been from Paperissima: I didn't know how to hold the needle, I kept dropping the button and I even pierced myself a dozen times!

In short, a frustrating situation to say the least!

But can you imagine it ?! Graduated engineer with flying colors, senior management consultant, and personal growth blogger who can't even sew a button on his shirt!

The truth is that all of us, at some point in our lives, we felt clumsy in something in which today we are real champions.


As babies we were perfect clumsy when it came to putting one foot in front of the other; in first grade we read like real clumsy (rather than quick reading techniques); and maybe today we feel awkward in something that tomorrow will seem damn simple to us.

As for me, putting some healthy ringworm from the Marches on it, I sewed my nice button on the cuff of my shirt, realizing on the other hand that at the end of the operation I felt much more sure of myself, than I had felt just half an hour before (yes, it took me half an hour, no need to laugh!).

This new learned skill, as I already told you, made me reflect on the difference between Talent e Practice, and on the lies that we often tell ourselves in order not to pursue our dreams.

Can I consider myself a cutting & sewing talent ?! Absolutely not, but with a little practice I have achieved my little goal.

In his essay Star Player, Canadian sociologist Malcolm Gladwell argues that anyone can become a champion by realizing 10.000 hours of practice. This of course varies depending on the discipline you are practicing, but the concept itself is very fascinating.

We live in a society that exalts the natural talent and luck: just think about how much money is thrown away in gambling games (especially in this period of crisis) or how football players are praised, compared to other endurance sports (trail runners, marathon runners, iron men, etc. ) are evil slugs.


At the same time, this company that wants us to believe that success must be easy, immediate and without obstacles, tends to minimize or even put in a bad light those who have been able to achieve themselves thanks to determination, To Resilience and hard work, perhaps starting from conditions considered disadvantaged.


The personal growth industry itself wanted to delude us, making us believe that to realize our wildest dreams it is enough to be able to imagine them vividly, perhaps resonating with the right "cosmic vibrations": the millions of copies sold by The Secret speak volumes about how much people want get it all e immediately, without being willing to give anything in return ... well yes, at most a quarter of an hour of views per day (I have already said mine in the past on the Law of Attraction).

The truth is that if we didn't have the gift of natural talent, if we were born in conditions of apparent disadvantage, if we are just amateurs, well ... we still have aweapon very powerful on our side: practice.

But the practice isn't easy.

A calm sea has never made a good sailor ❯

Minimalism - what it is and why it can make you happier

Clarify your life with the Dante Alighieri method

Why you should read 52 books a year

add a comment from A button, a shirt and the secret of success