A calm sea has never made a good sailor 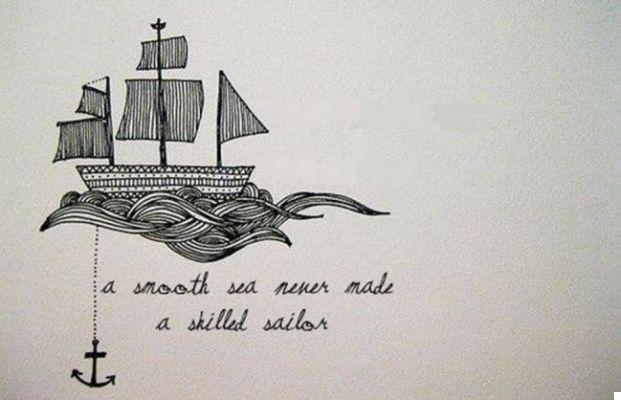 A calm sea has never made a good sailor: I really think this wise sentence contains one of the "secrets" of personal success. It is said that life is a game. And do you know why? Because like any self-respecting game, too life has a number of challenges.

Think about it: the life of anyone who intends to grow (in any domain) is a a succession of challenges, the outcome of which is obviously uncertain. No one knows what life's challenges will lead him to, and perhaps that is his own this mystery to make them exciting.

A calm sea has never made a good sailor: why?

About does not seek challenges and does not have the courage to "duel" in the arena called "life" deliberately decides to withdraw from any possibility of improvement. Who does not accept challenges (for fear of failure or fatigue), in the end must necessarily be satisfied of what life offers him, giving up the possibility of becoming master of his own destiny. Returning to the metaphor of the sailors who only face calm seas: they are sobjects to the climate and cannot travel the most daring routes. THE more distant places and the most wonderful discoveries become impossible to reach so that they have to be content with sailing close to ports, in the safest seas, without being able to set sail for the captivating oceans and reach those exotic destinations that will always and only remain unfulfilled dreams.


Security is mostly a superstition. It does not exist in nature, nor can human puppies prove it. Avoiding danger is no safer in the long run than being exposed to it openly. Either life is an adventure to be lived boldly, or it's nothing.

Only those who are willing to fight for their dreams and take risks can expect to achieve the goals they aspire to. Probably the difference between those who merely aspire to success and those who achieve success, it's all in the propensity to face life's challenges. Anyone is capable of doing the easiest tasks best, but often the easier things, precisely because they are within everyone's reach, do not lead far. It seems, in fact, that it exists a direct correlation between excellence and complexity: the world rewards those who learn to face and manage its complexity. AND it is no coincidence that success only comes to a minority, while the ranks of the dissatisfied are always the thickest. Furthermore, as I have already suggested to you in another article, you should learn how to love sacrifices, as they are today's investment for tomorrow's success.

A calm sea has never made a good sailor: what does this proverb actually imply?

A calm sea has never made a good sailor is a proverb that teaches us a great truth: one should never be frightened to the point of hesitating in the face of attempts to grow. Anzi, sit is precisely the moments of greatest difficulty that make us overcome our limits, and to let us acquire greater self-confidence, fortifying us. Through the most difficult challenges, in fact, we discover our true essence and consolidate our skills, exactly as it happens for sailors who, only in the throes of the storm, can learn to manage it and get out of it unscathed.

Then never accept that a day ends in defeat. Always resist the temptation to rest and retreat, until you are done with a win; thus you will plant the seed of tomorrow's success, gaining a significant advantage over those who will be content to retire even with failure. When the others give up the fight, discouraged and frightened by the difficulties, yours will begin; so your harvest will be amazing.