I do not want to work. I want to enjoy life! 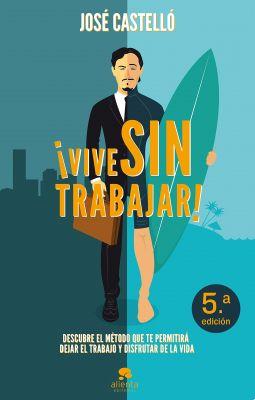 A brief reflection on the contrast between fatigue and pleasure, supported by stories and examples. Those who do not want to work are cordially invited to read this article.

"I do not want to work." - It is a statement that from time to time we hear that is among the apathetic children, both between tired old people of the work routine… But we at Fervida Inspiración, with a couple of anecdotes and some simple reflections, will make you change your mind!

Let's start with the first example right away.

"I have worked for so many years, now I will finally enjoy life." he thought during his last year of service.

He was a government official, he would retire with enough money and savings to maintain a high standard of living.

On the night of his last day at work, a small party was organized at the office. Everyone was there to celebrate his long career.

He went home happy that night, excited about this new stage in his life. He slept peacefully without worrying about having to get up early the next day. However, out of habit, he woke up at 5. He suddenly realized that he was retired and had nothing planned for that day. He got up and sat on the edge of the bed. Yes, he felt a bit empty and aimless.

He had never felt such a feeling while on vacation, but the thought of being on vacation forever overwhelmed him now.


After half an hour of boredom he got up, went for a long walk, had tea and read the newspaper. So she ran to the bathroom to get ready, but then she thought, "No more office, where should I go now?" She eventually got ready anyway, put on formal clothes and ate breakfast.

"What do I do now?" I think. Then she turned on the television and sat for an hour, flipping through the news channels. Finally, boredom prevailed and he turned off the television. She stared at the painting on the wall for a few minutes. He felt depressed, as if life had lost its meaning.

He changed into more comfortable clothes and slept for two hours. Waking up worried, he ate lunch, went back to watching television without any interest. Then he wandered through the house, waiting for night to fall.

He went to the mall, where he wandered for an hour. She didn't have anything in particular to buy, so she went home after having ice cream. After dinner, she thought about the next day. Nothing new, no stress, no commitments. He felt confused. After a while on television he went to bed.

He couldn't sleep like the other days, he spent half an hour on his smartphone. She thought for a while, rolled over a few times in bed, and then fell asleep.

The next day he got up, got ready, had breakfast, put on formal clothes and went out to find a new job or a new business.

Very often we don't know what we really want in life. We mistakenly believe that it can be much better without stress, commitments and duties.

When you think "I don't want to work, I want to enjoy life, I want to have fun". Keep in mind that having a lot of money and free time may seem idyllic, but the truth is that keeping busy is the best way to get your mind on track. A little stress and deadlines to meet can help us to always be active and motivated. Think carefully.

Reflection: There is no pleasure without effort.

You do not believe me? Try to define the concept of pleasure by excluding any form of fatigue.

Let's take some examples here too:

Let's say you like sports and you play tennis. Everyone tells you that you don't really have to play it and that you are the winner. You don't even have to show up on the field or train. The title of best in the world is already yours and nobody can take it away from you. He pretends that the same thing happens with football or any other sport. Would it be satisfactory?

Imagine that you want to visit a place and the next minute the trip is already all organized and magically you appear in that place. You don't even have to strain to explore it. You reach the top of the mountain in the blink of an eye, without having to climb it. The stairs that take you to the top of the medieval fortress are like escalators, they go up by themselves. You don't have to shed a drop of sweat. Would it be satisfactory?


He thinks he is full of lust and wants to have sex. No need to fight for it either. You already have at your disposal all the most beautiful girls in the world and you don't have to fight even during intercourse, in a second you will immediately reach orgasm. Would it be satisfactory?

A life without commitment is an empty life.

A void that cannot be filled. In the situations described above you would fall into depression. You would feel unrewarded and live without purpose. Work, fatigue and the challenges we face define our lives.

There are many mothers who are housewives who do not want to have maids in the house because otherwise they would have nothing to do (taking care of the house and the family is a job, if someone else does it you cannot do it). Retirees get bored because they no longer have the commitment to work and have to find another purpose. Lottery winners quit their jobs in search of vain happiness, end up spending all their money or taking drugs, trying to escape boredom and depression.

When you don't have a job, there are no vacations. Your whole life cannot be a vacation, it would be just boredom, nothing more.

It is never the end result that makes us happy, but the path we take. Satisfaction is greater the more commitment is put on the path that is undertaken.

Would Pantani have felt the same joy when winning the '98 Giro de España if, instead of pedaling all those kilometers, he had let himself be carried away by the flagship?

Definitely not, but you know who would be happy? The driver of the car, because all the credit would have been his. His commitment, his work, his satisfaction.

"Laziness may seem attractive, but work gives you satisfaction."

So if you don't like to work, redefine work with what you love to do. Because a life without work, without effort, without commitment, is an empty life that could not be emptier.

Another short story: The king who had everything

There was a king who always stayed in his castle and could eat all the delicious food he wanted. He had no duties other than eating, drinking, and sleeping. Eventually, he lost interest in what he ate every day. All the dishes seemed insipid to him. He called his doctor to see if he had any pathology, but the doctor checked him from top to bottom and told him that there was nothing wrong with him. However, his problem remained unresolved.

So he spent a few weeks in that state and finally got fed up with his routine. So he decided to go hunting. He went into the forest and ended up getting lost. He was terribly tired and hungry. It had been a long time since he felt such an intense hunger. Wandering around looking for food, he came across a small shack. He knocked on the door and an old woman opened it for him. He asked her for food, but the poor old woman had nothing to offer him but a little rice with a pinch of salt.

The king told the lady that this food was the most delicious he had ever eaten and asked her how it could be so tasty. She replied that it wasn't the food that was delicious, it was her hunger that made it so good. Then the king realized that to enjoy the good things in life, you must first lose them.

Food doesn't taste good if you're not hungry.

Do not dream of being able to enjoy a life without fatigue and hard work. Pleasures that do not require sacrifices are momentary, you will quickly lose interest in them.

If before reading this article you thought "I don't want to work, I want to enjoy life, I want to have fun!", now you probably you have become the desire to commit (at least a little, hopefully).

"Anything worth having in life is worth working for."

If you still don't feel motivated enoughWe invite you to read our articles:

yes instead are you ready to get to work, we recommend you read the latest book by Marco Montemagno, "Lavorability", a guide on the skills that the jobs of the future will require. Skills you better start training now if you want to do rewarding work in the future

Go to Amazon for the best price

You no longer have any reason to say “I don't want to work”.
That's all from the writing of Fervida Inspiración. We hope this article has inspired you.

Thank you very much for your attention, see you in the next article!

"Man came when he does what he would do for free for a living."

The most productive times of the day?

Professional opportunities of the psychologist

add a comment of I do not want to work. I want to enjoy life!