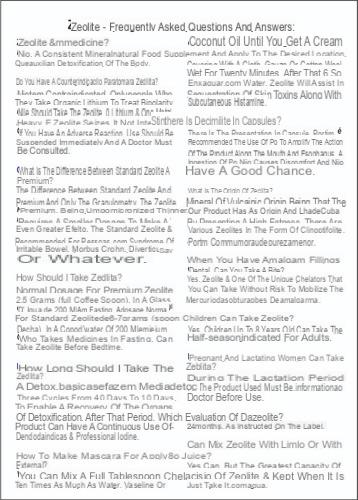 La zeolite (from the Greek zein "boil" and lithos "stone") is a mineral of volcanic origin, originating from incandescent lava and brackish water, which, thanks to its structure made of very small microporous particles, it can be very useful for the body to purify it deeply, especially from heavy metals.

Let's find out together what it is.


What is zeolite and what is it used for

Zeolite, also known as "boiling stone", as it heats up by sprinkling a little water on it, it has a completely unique chemical-physical structure.

It is indeed a hydrated alumosilicate of alkali metals. Inside, consisting of a sort of channels in the shape of a crystal lattice, there are cations such as caldium, magnesium, sodium or potassium in combination with water. Zeolites are able to exchange their free cations with heavy metals, ammonium ions or other cations.

There are more than 100 types of zeolite, which can be divided into three large groups: one-dimensional, two-dimensional and three-dimensional channel zeolites.

Specifically and of direct interest to humans, according to the most recent studies and researches, a particular type of this mineral, the clinoptilolite zeolite subjected to tribomechanical activation, i.e. subjected to a physical or chemical process that allows it to react more easily, it manages to become a useful tool for the purification of the human body from heavy metals, toxins, free radicals.

The mechanism is very simple: the charges present in the very small channels are able to bind with toxins and heavy metals; once it enters the body, the activated zeolite begins its work in the gastro-intestinal tract, thanks to a chemical reaction.

How and when to take zeolite?

Consider the purifying properties of zeolite, this supplement must be taken orally to counteract typical symptoms of intoxication, inflammation or skin infections, accumulation of heavy metals.

Zeolite should be taken with plenty of water, circa 150 ml.

The dosage of the zeolite depends on the purpose of the cure: in the pure zeolite powder version it is indicated in teaspoons and the indication is that of a teaspoon half an hour before meals.

Zeolite supplements are useful for sportsmen, for those who carry out intense physical or mental activity, for those who are stressed or for students.

Adjuvant for a deep purification and detoxification of the organism, it is a natural and alkalizing antioxidant, also ideal for convalescents and elderly people.

The therapeutic properties of zeolite are innumerable:

Zeolite would improve physical and mental performance and would regulate metabolism and digestion and, according to recent studies, would enhance the efficacy of the anticancer therapies in place.

Zeolite therefore appears to be a good natural supplement, also often used by sportsmen, as the feeling of tiredness decreases, increasing the ability to concentrate and increasing physical endurance.


In addition to the internal use of zeolite, this mineral is also excellent for topical applications in case of acne, itching, dermatitis, eczema, psoriasis and other skin disorders; it is also used as ingredients in cosmetics and in deodorants, since absorbs perspiration and unpleasant odors, making it ideal for hyperhidrosis, excessive sweating of the body (hands, feet, armpits, face).

For topical use, a little powder can be used and dab it on the affected areas with a pad soaked in water, massaging gently.

Numerous zeolites, both natural and synthetic (such as permutites, a class of zeolites obtained by mixing quartz, kaolin and soda), have long been used in industry, particularly in the petrochemical industry, as catalysts, but also in detergents, construction, agriculture, water purification and of purifiers and in medicine.

Zeolite can be used for absorption odors, to eliminate soil pollution.

Pros and cons of zeolite

There don't seem to be any particular contraindications regarding the intake of zeolite, mineral which is defined as non-toxic, not absorbed from the gastrointestinal tract.

However very sensitive people they could have nervous reactions, headaches or nausea, being a chelating treatment, which frees from toxins and in any case brings internal changes to the organism.

The chelating property of zeolite it could affect the effectiveness of medication intake, for its absorbent power. In case of ongoing therapies, before taking zeolite, it is advisable to consult your doctor.

Side effects of zeolite

There are no side effects taking zeolite, but in case of constipation do not continue the treatment for a long time and in any case it is recommended to drink plenty of water, to remedy a possible slowing of intestinal peristalsis.

The purifying efficacy of the zeolite could present the account in the immediate, with episodes of nausea and headache, but which resolve in a short time.

Where is zeolite and curiosity

The zeolitization process, i.e. the transformation of rocks into zeolites, is frequent in regions subject to ancient volcanic activities, come le regioni di Paratunka e Pauzhetka in Kamchatka, and particular areas in New Zealand and Iceland. The only zeolite mine in the town, present in Tuscany between Sorano and Pitigliano, is in the province of Grosseto.

The use of zeolite as a food additive it has been authorized in Japan since 1996, where adding zeolite was found to result in higher nutritional value of foods and less digestive upset. About forty patents used in the medical field have been registered since 1998.

Zeolite was also used in Hiroshima and Nagasaki, following Chernobyl, to help those affected by radiation. In more recent times it has been used to clean the sea of ​​radiation following the Fukushima disaster.


Zeolite is sold online, in parapharmacies, pharmacies and herbalists.

Zeolite to purify the body