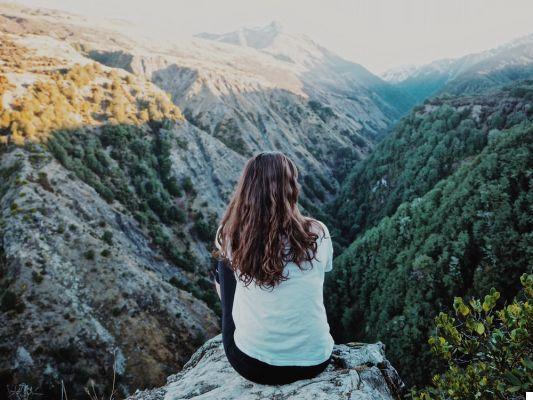 While walking down the street around Arizona City, Vivian Gornick experienced "an unusual fact that broke all her certainties," in her own words. At the age of 60, the famous journalist and writer made a disconcerting discovery: she realized that she had never "compromised herself without limits in life".

In her book "The odd woman and the city" she says that she had big goals and wanted to change many things about herself, but it was easier for her to daydream, "to wish things were different in order to be different herself", rather than committing to change by rolling up your sleeves.

After all, it was her fears that held her back. Those atavistic fears that we all have and that, although we do not always recognize, become a limitation that prevents us from being the person we could and would like to be.

Gornik set out to take this seriously. He understood that to live fully he needed to "love life more than he loved his fears."

As absurd as it may sound, we don't just bond with the things and relationships that make us feel good. We can also attach ourselves to situations that harm us because they contribute to maintaining a balance that, although it may be precarious or even unsatisfactory, is the only one we know and gives us confidence.

Fears help us stay in our comfort zone. They are a kind of guardians. They warn us that if we don't pay attention to them, we will move forward at our peril. In fact, many times the scenarios these fears generate before our eyes are so terrible that we end up convincing ourselves that we are better off under their wing.


So we cling to those fears as if they were a lifeline. Perhaps we realize that these fears do not allow us to move forward, but we also realize - at least unconsciously - that we will not have to take too many risks. In this way we maintain a poor balance for most of our life.

Our fears, which at first were meant to fulfill only a protective function, are transformed into guilt and excuses, barriers and shields behind which we keep ourselves "safe from life", even if staying safe means not living fully.

The most paralyzing fear

On the way to reach our best version, we encounter a fear that paralyzes us: the fear of not being up to par. It is not the fear of failing, it is the fear of trying, but stopping one step away from the goal. Having done it well, but not enough. Having made an effort and realizing that we have not been able to achieve the desired goal.

What scares us is not the "failure" itself, but what that failed attempt says about us, the blow to our ego. To prevent that fear from materializing, many times we prefer to avoid risk, stay in our comfort zone, where we don't grow up, but at least we feel safe.

We choose not to compromise. We do the necessary things, the essential ones, but we are not fully dedicated to achieving the goal. That way, if the worst omens come true, we will have an excuse to protect our aching egos.

Let yourself go to be the best version of yourself

The only way to reach the best version of ourselves and live more fully is to overcome our fears. This does not mean getting rid of them completely but going on despite them.

We need to be aware that many of our deepest and most crippling fears were formed in our early years. At that time they had a protective function because we were vulnerable, but now they probably have no reason to be anymore.

It is also possible that other fears that help create our world do not stem from our direct experiences, but are inherited from our parents or other authority figures. Our parents can transmit to us not only the fear of flying or enclosed spaces, but also much more limiting fears such as the fear of failure, of not being up to par or of social rejection.

Overcoming these fears is a conscious decision that involves betting on ourselves and engaging in personal growth to give us the opportunity to get where we can and be all we can be. So we can "go back to that point in the spirit where it is acceptable to make the effort," as Gornick would say.

Reasoned reasoning: when wanting to be right is unreasonable ❯