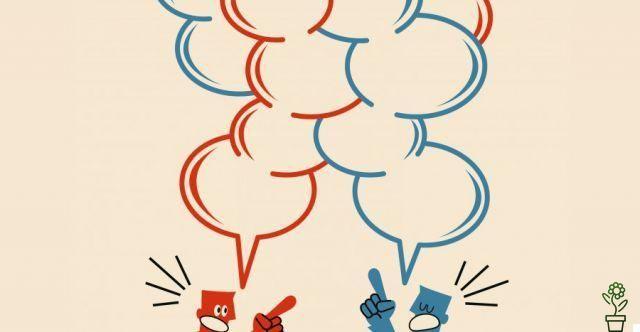 For a good part of our lives, we associate our value as people with what others think of us. In fact, it is not strange if we consider that from an early age we learn that to be accepted we must meet certain standards, listen to certain people and adapt to certain situations. Whether we liked it or not, our opinion and tastes had little weight in the equation, so we formed the image we have of ourselves, an image that largely depends on others. For this reason the praise they make us feel so good and le critical they make us feel bad. In reality, behind those feelings there is a deep conviction that was sown during our childhood: our value depends on others, it is others who decide.Obviously, this is an error that Thomas of Kempis had already discovered in the XNUMXth century. century, when he said that "you are not better because they praise you or worse because they criticize you". We are complete people, the opinions of others are just that, opinions, they do not determine our value.

We are addicted to praise, ergo criticism annoys us

In a sense, the need for approval is based on a desire to be praised, a desire that, according to a study conducted at University College London and the University of Aarhus, would be written in our brains.These psychologists have noticed that when people were praised for their decisions, the ventral striatum was activated, an area bound to reward. And the more praise they received from others, the greater the activation. In other words, praise makes us feel good and triggers a mechanism similar to that produced by addictions. In fact, these psychologists have found that when we receive social approval, a neural network almost identical to the one underlying addiction is activated. Therefore, it is as if we are "programmed" by nature to seek acceptance. Of course, there are people in whom this connection is not as intense. Probably in their childhood they were not "forced" to constantly seek the approval of others or they did a great job of personal growth in adulthood that allowed them to free themselves from the need for acceptance. In such cases, the connection is much weaker and, therefore, the sense of well-being when they receive praise. Of course, the fact that we are "programmed" to seek group approval also implies that criticism hurts us because, in a way, they are a sign of rejection. And social rejection activates the same brain areas that are activated by physical pain, so it's normal that we want to avoid it.But we have to keep in mind that both praise and criticism are just opinions, not a measure of our worth as people.

Can we turn a deaf ear?

We are social beings and there is nothing we can do to change it. In fact, we shouldn't even try because relationships with others nourish us and allow us to grow. The key is to understand that the judgments of others represent only a limited view and express their idea of ​​how we should behave or what decisions to make. In short, we are not required to follow this pattern, especially if those opinions take away from us. We are able to listen, reflect and discard an opinion if it hurts us or artificially exalts us; in fact, an exaggerated praise can often be more harmful than a criticism. Excessive and unsubstantiated praise can generate a false image of our abilities, can lead us to make very hasty and unobjectionable decisions that we may regret, so it is important to protect our worth. Remember that the most unhappy people are those who care too much about what other people think. Imagine being a painter and having people around you who praise or criticize your work. You can listen to their opinions and take them into account, but in the end the most important thing is that you have enjoyed painting and are satisfied with the result. And this you will only get if you look within yourself and know what you want.Undoubtedly, a lot of strength is needed, but remember that your worth depends only on you. Only you know your dreams, you know what is truly important to you, and you can appreciate the effort you have had to put in your path. Do not let the opinions of others distort your essence or separate you from the path you wish to take.
Do not sow flowers in gardens of people who will not water them ❯