The Yogurt it is a derivative of milk also suitable for lactose intolerant people. Rich in calcium and vitamins, yogurt rebalances the intestine and is a healthy and rich food. Let's find out better.

> 1. Properties and benefits of yogurt

> 3. Cosmetic use of yogurt 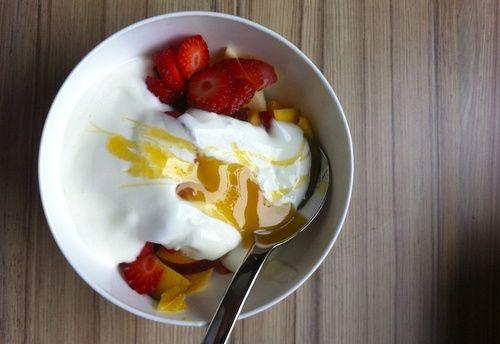 Properties and benefits of yogurt

Lo yogurt interoceptive contains proteins, carbohydrates, fats, a good percentage of calcium, vitamins, especially those of group B. I eat a lot saziante, suitable for low-calorie diets, favors the exchange of bile e rebalances the cholesterol; just think that a 150 g jar of natural yogurt provides a third of the recommended daily intake of calcium at only 90-100 kcal.

Even those who suffer from lactose intolerance can benefit from this food, because the lactose, through fermentation, it breaks down into two sugars, the glucose and galactose, easily assimilated by the body.

The acidity of the yogurt favors the development of a intestinal bacterial flora able to counteract the putrefactive phenomena that occur in the intestine. This action is due to the proportion between two fermenting microorganisms, Streptococcus termophilus and Lactobacillus bulgaricus, and the starting quality of the milk.

- whole white yoghurt on the market they have more or less the same nutritional values ​​and the preference may depend on the number of live cultures shown on the package. Other yogurts with fruit, cereals, etc. they must also be evaluated on the basis of calorie content.

Intestine, skin, central nervous system. Yogurt is also ally of mothers: it is essential for the proper nutrition in pregnancy, for the development of the fetus because it increases the levels of folic acid.

Yogurt among the natural probiotic supplements: discover the others!

Cosmetic use of yogurt

Many and many appreciate the double use that can be made of it yogurt, summarized in the motto: if you don't eat it, spread it! Some examples?

Moisturizing mask
Get yourself a blender and mix a banana, 125 ml of natural yogurt, a tablespoon of honey and 2 tablespoons of oil. Spread on the skin and let it act for 20 minutes and then rinse with plenty of warm water.

Toning mask
Mix a jar of yogurt with the juice of 3 tomatoes. Separately, boil 100 ml of distilled water and 50 g of oatmeal. Once cooled, mix everything until you get a creamy mixture to spread on the face. Leave to act for 20 minutes then rinse with warm water.

Here is the recipe for a healthy breakfast based on croissants with yogurt.

Melt 125 g of butter in a double boiler, then leave to cool. Pour into the mixer 250 g of flour with 1/2 sachet of yeast, the cooled melted butter, 125 g of natural whole yogurt and a pinch of salt. Run the mixer until the mixture is compact.


Work the dough a little by hand, sprinkle flour on the pastry board and roll out the dough in a circle with a rolling pin. Cut it into 8 wedges, adjust the edges and stretch each wedge with a rolling pin. Stuffed with jam, nutella or honey, roll up the croissants, arrange them on a baking sheet lined with parchment paper. Put them in the oven at 180 degrees for about 20 minutes. Sprinkle them with powdered sugar.

READ MORE
Yogurt among the foods for weight loss: discover the others

Other articles on yogurt:
> Yogurt, a panacea for health
> Yogurt as a breakfast food for weight loss