Why do we tend to insist in the wrong direction? 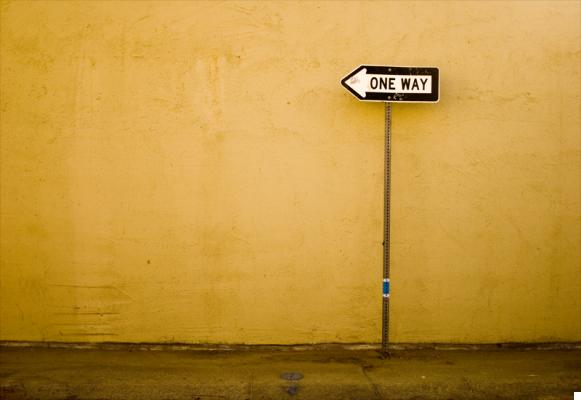 It happens to everyone, sooner or later. There comes a time in life when we realize that we have to change, we have to go in another direction, because what we are doing simply does not work or leads to a dead end.

But becoming aware of the need to change is only the first step. Usually there comes a stage after that where we get stuck, feel trapped in past decisions and realize that bad habits return.

Without realizing it, we begin to insist in the wrong direction and, of course, we do not advance but begin to retreat. However, the effort we make is such that we end up exhausted and unmotivated, not realizing what happened. The answer is very simple: we are victims of what could be called the "syndrome of erroneous insistence".

Insisting in the wrong direction

Imagine it is summer. You are sitting quietly on the sofa in the house and you begin to feel the sweltering heat. To cool off, open the window a little. Then open another window in front to create a little current.

When you get back on the sofa you feel much better, but after a few minutes you start to think that if you open the windows a little more you will feel even less hot. You get up and do it. And continue like this until the windows are completely open.

Finally you sit quietly on the sofa, ready to relax and enjoy the pleasant draft, but after a few seconds you realize that the heat is back. Because?

The answer is simple: according to the laws of physics, there comes a point where the more you open the windows the slower the air circulates.

In our life we ​​often practice this type of behavior. In fact, we insist in the wrong direction when:

- We cling to behaviors from the past that were effective at the time, but are no longer effective now and have lost their meaning.

- We insist on criticizing, thinking that if we keep doing it the other person will change, when in reality we only get him to get defensive.

- We persist about a dream or idea that we think is brilliant, without taking into account the information that the real world sends to tell us that we are moving in the wrong direction.

- We remain tied to a relationship, usually a couple, which no longer works and has become a source of conflicts and dissatisfaction.

In all of these cases, certain behaviors, beliefs or ideas were perfectly valid and effective in the beginning. However, at some point along the way, conditions have changed and we haven't noticed, so we keep repeating old behaviors or applying beliefs that have become maladaptive. Obviously, at this point the results we get are not what we hoped for, instead of moving forward we feel stuck or even retreat.

At that point we enter we have entered a vicious circle because we begin to insist in the wrong direction, wasting strength and energy. So, instead of reflecting on our core beliefs, we think the problem is that we don't apply ourselves enough, so we redouble our efforts in the wrong direction.

Of course living within this cycle, continuously swimming against the current, can be devastating, because we end up believing that we are not capable enough, when in reality the problem is that we have to change direction.

How to get out of this vicious circle?

If lately you have been feeling trapped in a situation that is consuming your strength and energy without producing the expected results, perhaps the problem is that you are insisting in the wrong direction. Ask yourself these questions:

- Life is constantly changing, but have you changed enough? A Chinese proverb says "you cannot control the wind, but you can control the sails of your boat". Life changes all the time, but sometimes we are unable to adapt quickly enough to these changes. But continuing to repeat past behaviors, just because they once worked, is not a guarantee of success, but of failure.


- Look around, what signals does the world send you? We often persist in following a path because we are too focused on ourselves and ignore the signals that the world sends to show us that we are going in the wrong direction. Therefore, stop along the way, establish an emotional distance, and try to decipher the meaning of all these obstacles, problems and conflicts that arise and block you. Maybe I'm just there to tell you you better take another route. In fact, if your life plan doesn't work it doesn't mean that you should change your goal, but your plan.

- What are you afraid of? Sometimes we insist in the wrong direction because the other possibilities frighten us. In fact, this is a fairly common mistake in romantic relationships. We remain tied to a person because we think we will never find anyone and we are afraid of being alone. Obviously, this is not a good reason to affect our life. Make sure your decisions express your dreams and hopes, not your fears.

Losing control to open up to new experiences ❯

add a comment of Why do we tend to insist in the wrong direction?