Why am I on a diet and not losing weight? 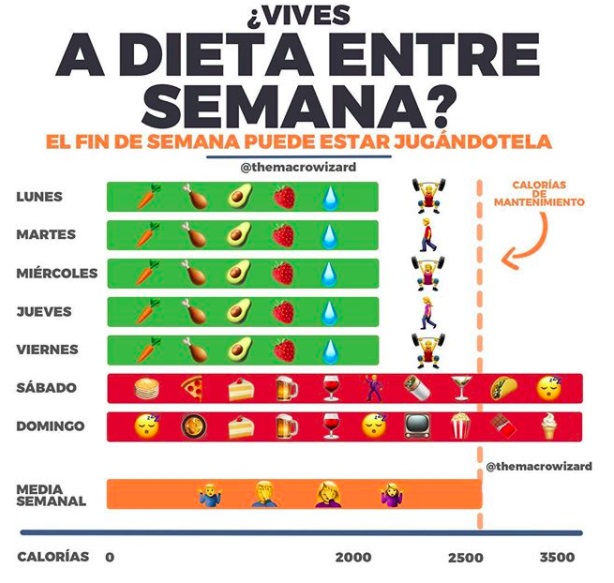 Why am I dieting and not losing weight? It is perhaps the most frequent question that dieters and personal trainers have to answer.

Generally speaking, if the person following the diet is overweight and the strategy is technically correct, there should be no particular difficulties in weight reduction of fat mass. Of course, all this subordinates to the honesty and awareness of those who try their hand at dieting for weight loss - it may seem obvious, but it is not at all.

Failure to comply with the diet: why is it wrong not to inform the dietician?

The sincerity of users, with themselves and with the professionals who follow them, is absolutely not to be taken for granted; however, it is not possible to intervene on this aspect. Determination and righteousness are in fact necessary elements for the success of the therapy and, even if the professional is required to motivate skills - ranging from simple counseling, to empowerment, up to the presentation of a "model-example" to follow - alone does not it can fill gaps of this kind.

The conspiratorial attitude on the bankruptcy course of the diet is not so rare. People feel ashamed to confess to DON'T have the right motivation and fear the therapist's judgment. However, this does not provide the essential prerequisites for improving the situation. In fact, it is not certain that this lack depends only on the patient; sometimes, it is sufficient to increase the pleasantness of the food or slightly increase the daily calories to rediscover greater fidelity to the project.

Having difficulty in adhering to a weight loss diet, therefore, it is not a fault. The strategy may also not be essentially correct, the period may not be the right one, and there may be undervalued collateral difficulties. If so, everyone should ask themselves a question: "Now, how much time and resources would I have to devote to achieving this goal?" Moreover, if the need for weight loss has no health reasons, but only aesthetic reasons, it is also right to give it the importance it deserves.

We have already talked about the correctness of the strategy, which can also be defined as a diet or diet for slimming. What should a weight loss diet be like? In the next paragraph we will indicate which key principles a weight loss diet should possess.

To be effective and healthy, a weight loss diet should have some inalienable principles. So, if you diet and don't lose weight, you may be making one or more fundamental mistakes. Let's go into more detail.

To enable the body to dispose of the fats contained in the adipose tissue - which, as we know, constitutes an energy reserve - it is essential to create a negative caloric balance; very briefly, the caloric balance is the result of the following arithmetic operation:

ENERGY IN (taken with food) - ENERGY OUT (spent on metabolic, basal and motor activities)

If the result is zero or even positive, that is, if the calories introduced with food and drink are greater than those consumed, the body will not use the reserve fat - indeed, in the case of a positive balance it will tend to accumulate some. If the result corresponds to a negative value, a reduction of the lipid stocks takes place.

A diet that does not provide all the energy necessary to maintain weight stability by reducing it is called a low calorie diet. Obviously, this property is strictly subjective, because energy consumption is individual.

Thanks to the collective misinformation, many believe that the low-calorie diet is an outdated method, because it is stressful and harmful, as it is feared that it may reduce the basal metabolism and affect muscle volumes. Wrong. Granted that such undesirable effects could occur, they would happen with very important energy restrictions, which fall well beyond the so-called basal metabolism - calories expended in conditions of total rest, awake, without digestion, thermogenesis, sweating or any brain or physical activity. A diet can be as low as 1% calorie.

Then, sometimes those who criticize the nutritional restriction system suggest that the safest and most effective method would be to increase the movement. Now, it being understood that in the absence of an adequate motor activity protocol it is undoubtedly advisable to undertake it, the result does not change. What is certain is that by doing sports you will also get many other benefits, both in terms of health, but also in weight loss; for example, physical activity invigorates the muscles, creates oxygen debt and improves the metabolic utilization of carbohydrates, which contributes to increasing energy expenditure and optimizing the destination of the nutrients consumed. However, the principle remains the same: a negative calorie balance. Many argue that this has the advantage of eating more, to the advantage of providing essential nutrients. On the other hand, the need for vitamins, essential fats, essential amino acids and minerals increases with the increase in physical effort due to sport. As if that were not enough, moving more also involves an increase in appetite, which will have to be reckoned with at the table.

XNUMXnd principle of a weight loss diet: proportionate and calibrated

We have already said that the weight loss diet must be strictly personalized, since the caloric expenditure is dictated above all by the characteristics of: sex (related to the size of the muscle mass), age, thickness of the skeleton, proportions of the same and level of motor activity ( work, sports and recreation).

In general, the calibration of a low-calorie diet is made on the theoretical, potential or previously estimated weight loss of about 3 kilograms per month (± 700 g or a maximum of 1 kg). To obtain a similar effect, it is necessary to calculate the daily caloric expenditure - consisting of the basal metabolic rate added to the level of physical activity - and then reduce it by 30% (each -10% corresponds, approximately, to a weight loss of 1 kg).

Furthermore, do not believe that the relationship between calories removed and adipose fat used is totally linear. A point is reached where, perhaps due to saturation of the metabolic pathways, the recruitment of reserve lipids no longer increases and instead the neoglucogenesis from amino acids is accentuated.

Talking about calories alone can sometimes be misleading. Carbohydrates, proteins and lipids - the three macronutrients with an energetic function - should be taken in a certain percentage. The guidelines suggest a clear prevalence of carbohydrates - in a ratio of about 4 or 5 to 1 between complex and simple - followed by total lipids - ¼ saturated and ¾ unsaturated, with 2,5% essential and semi-essential omega 3 and omega 6 - and finally from proteins - better if 1/3 of which of animal origin. Furthermore, the total cholesterol should not exceed 200 mg / day, the fiber should be around 30 g / day and the total water in the measure of approximately 1 ml / kcal taken with food.

According to the habits of the population in your country, the diet should include a breakfast, two secondary snacks, a lunch and a dinner; each of these meals has a function, which is why the percentage of calories to be attributed to it is relatively different. Obviously this can change a lot depending on personal habits - work shifts, sporting activity located at strange times etc; however, in general it is suggested to provide: 15% of the energy at breakfast, 5% in the mid-morning and mid-afternoon snack, 40% at lunch and 35% at dinner.

A weight loss diet, precisely due to its "potentially stressful" nature, must not be prolonged in the long term, or worse indefinitely.

Taking all the aforementioned traits for granted, a low-calorie diet proper should be followed for no more than 24 weeks; once the term has expired, a maintenance or stabilization phase must follow in which the mind and body have the possibility to recover from the "fatigue" of this process. Obviously, the diet to be followed will be of a normal calorie type and should not lead to weight gain.

Then, if the condition requires it, it is possible to resume weight loss - although it would be advisable to reduce the period to 4 months. Everything can be repeated until the goal is reached.

Readers don't make the mistake of thinking this strategy may be too slow. In 6 months you can lose weight up to 18 kg, a result that is far from negligible.

The pleasantness of the diet is certainly a detail not to be overlooked. In fact, if this were not the case, the difficulty in consuming only unwanted foods would be added to the effort of getting used to eating less. This significantly compromises the success of the method.

Obviously, everything you want cannot be integrated into a low-calorie diet, partly for reasons of food education, but also due to the greater difficulties in maintaining a nutritional balance that this would entail.

Difficulty in losing weight: why?

It is very difficult to say. Overall, the difficulties could be divided into two macro-groups:

The latter, then, could be further divided into:

The difficulties in diet-dependent weight loss are the total responsibility of those who built the strategy and must be sought by superimposing its specific characteristics on the principles we talked about in the previous paragraph.

On the other hand, personal difficulties in weight loss depend substantially on the behavior or physicality of the subject. The conscious ones mainly concern the aptitude to err frequently, or to lose the habit of calibrating portions, or the need to often eat outside the home, etc. The unaware ones, on the other hand, derive mainly from a lack of education on what to do; the most frequent cases concern: the estimation of the oil used for seasoning - the famous "drizzle of oil", which often becomes a "torrential waterfall" - the incorrect substitution of foods - for example, replacing light cottage cheese with a mozzarella, which contains almost triple the calories - etc. This may be due to the poor accuracy of the person who produced the diet in explaining all the details of the case, or to a superficial attitude of the user.

Then there are personal difficulties that can be modified and not modified. Among the modifiable ones, for example, we find the aware and unaware ones mentioned, since it is sufficient to correct certain inadequate behaviors to adjust the shot and obtain the estimated weight loss - even if sometimes it is not so simple. The non-modifiable ones, on the other hand, concern metabolic and lifestyle obstacles that must be dealt with but which cannot be altered. The most common concern work needs, such as eating in the canteen, having to skip meals, often moving abroad, etc. Rarely, however, there are also cases of non-modifiable personal difficulties with an organic basis, which therefore concern bodily functionality. For example, women with polycystic ovary, highly insulin resistant people, subjects with particularly reduced muscle mass and who cannot perform physical activity, etc. will certainly have greater difficulties - even if this does not mean that the weight loss should correspond to zero, but only that it is below expectations.

These are the reasons that most frequently do not allow adequate weight loss. There are also infinite combinations of the cases mentioned above and almost always the failure has a multifactorial reason. Having said that, the best advice remains to rely on a qualified professional, who will be able to follow the weight loss until the end, and after which he will also be able to draw up a diet to maintain the result obtained.

Audio Video Why am I on a diet and not losing weight?
Lose Weight, Lose Weight and Weight Loss Diet ❯

add a comment of Why am I on a diet and not losing weight?