Il white pepper is a spice with a diuretic action, useful for digestion and for stimulate the metabolism. Let's find out better.

> Properties and benefits of white pepper 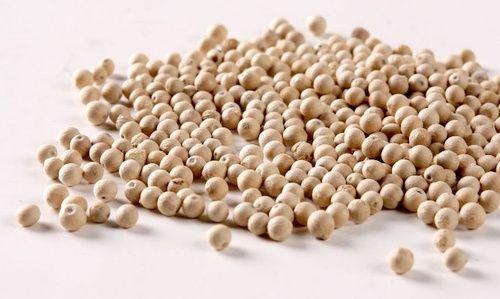 Il white pepper is obtained from the processing of the fruits of Piper nigrum, a plant belonging to the Piperaceae family from which, through various procedures, also the black pepper and green pepper.

For the production of white pepper, the berries of the Piper nigrum are picked almost ripe (when they appear large and reddish) and are left to macerate in water to cause the detachment of the outer shell (sold pulverized as a "pepper shell" with a brown color and pungent taste).

The cleaned grains are subsequently dried and are presented at the end of processing smaller than those of black pepper and with a much more delicate flavor.

Properties and benefits of white pepper

The beneficial properties of white pepper derive from the presence of piperine and they are quite similar to those of black and green pepper.

- stomachic and stimulating effects gastric secretions and thermogenesis make it useful for promoting digestion, as well as for facilitate the absorption of nutrients from ingested food e stimulate the metabolism.

White pepper is also effective for purify the organism thanks to diuretic properties and to lower the fever thanks toantipyretic effect.

Also discover the properties and benefits of black pepper

The flavor of white pepper is milder and sweeter than the black type. Its grains are smaller, more fragrant and less spicy.

White pepper fits perfectly with all dal dishes delicate flavor such as those based on fish (very good in the first courses with seafood) or white meats.

Perfect for flavoring sauces (especially if based on cream or cheese), boiled potatoes and pickles.


Thanks to its sweet and light aroma, it also lends itself well to original combinations, for example with fruit to create a fresh strawberry dessert or with tofu.

For its light color this pepper is generally more suitable for flavoring sauces and white mayonnaise in order not to obtain the unsightly dotted appearance that black pepper would create because you know, in the kitchen even the eye wants its part!

White pepper is very successful in Chinese cooking since its less pungent aroma than the black one goes better with bittersweet flavors.

The berries of white pepper together with those of black pepper are coarsely ground and blended to obtain a mixture widely used in French cuisine called mignonette.

In Ancient Rome, pepper was much loved and among the desserts of the time there was a dessert prepared with white pepper: its grains were roasted and covered with honey.

In general, in the laid tables of the Romans, white pepper was widely used and often it was ground in wine or combined with olive oil, wine and vinegar to prepare sauces with which to serve fish.

The varieties of pepper and their use

add a comment of White pepper: properties, use, nutritional values