White meat, how to choose it and how much to eat 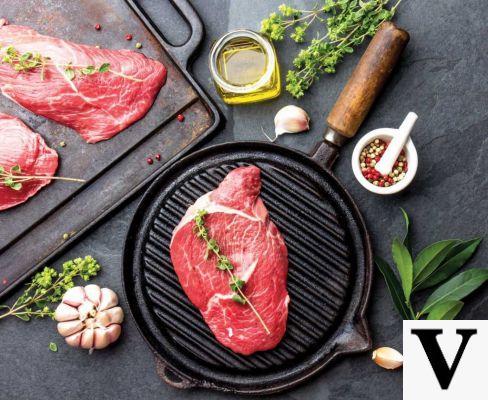 La White meat like it more and more. According to the data of Unadel Paese, the association that represents almost all the companies in the sector, to dominate on our tables is the chicken (we eat on average almost 15,5 kg per year), followed at a distance by the turkey (about 4,5 kg) and the rabbit (1 kg).

While the gastronomic interest in the latter animal has been progressively decreasing (together with its affirmation as a pet), that for volatile it has grown by as much as 24% in one five-year period. To certify it is an Ipsos survey, which also revealed that for 54% of the townspeople, chicken and turkey have become the main source of protein.

The reason for color

But white meat is really healthier than red meat, or is liked more just because It costs less?

“Chicken, turkey and rabbit boast a lower myoglobin content, the protein present in the muscles of animals that ensures the transport of oxygen and is responsible for the red color. It is precisely the lack of this substance (combined with the low presence of saturated fats) that makes meat white more suitable for a healthy diet», Explains Dr. Diana Scatozza, a specialist in Food Science. But let's see all the advantages one by one.

It does not promote tumors

“Unlike red meat, white is not never been accused of increasing the risk of getting cancer», The expert points out again.

The European Institute of Oncology in Milan founded by Umberto Veronesi (who in life has always supported the health benefits of aieta based on fish and vegetables) gives the green light to its consumption a couple of times a week, while speaking of that of bovine he clearly says to limit it even more.

It is not bad for the heart and arteries

"Chicken and turkey, added to the menu as an alternative to other protein sources such as cheeses, eggs and red meats, can help keep coronary risk under control»Explains Dr. Diana Scatozza.

The reason? "The low sodium content, which can promote hypertension, and the richness of polyunsaturated fats, which, unlike saturated ones, do not clog blood vessels."

«If you want to lose weight, chicken and turkey are your main ally: they are and "light", too and they have low in fat, concentrated mainly in the skin, therefore easy to eliminate », says the dietician.

“You just have to pay attention to don't add too many toppings. Consume them grilled, flavored with a pinch of herb and lemon salt. Or boiled and diced, in a salad of mixed raw vegetables, with the addition of a teaspoon of extra virgin olive oil ».

It is very digestible

White meat is made up of small-caliber fibers with little collagen, which is why it's a lot easy to digest. However, be careful not to abuse it, because the intake of too much protein (of which it is the source) involves an overload for the work of the kidneys and liver.

«At the table it is essential respect the correct proportions of nutrients», Says Dr. Domenicantonio Galatà, nutritionist biologist. "The daily calories should come 60% from carbohydrates, 25-30% from fat and 10-15% from protein."

But what then is the right dose? The country's Society of Human Nutrition recommends bringing to the table 3-4 portions of meat (of 100 g each) per week. «The ideal would be to include in the menu 3 times the white meat of chicken and turkey and once the red one, of beef or pork», advises Doctor Scatozza.

Where to buy it

If you are looking for the ultimate in taste, don't go to the supermarket, but buy meat on the farm: you will have the certainty that the animal was raised in a non-intensive way.

“When it comes to our tables, an industrial chicken (called a" broiler ") has about 40 days, few because it is nice and tasty. But on a nutritional level, the type of farming does not involve substantial differences », explains food technologist Giorgio Donegani.

“This also applies to organic products, which are now easy to find in almost all supermarkets: the animals are fed with GMO-free feed, subjected to more checks and raised with a greater sensitivity to their well-being. They can have better tasting meats, safer from the point of view of drug residues, but not for this reason richer in substances beneficial for the health of the organism ».

«Today the conditions of breeding, processing and distribution guarantee us a quality product», continues the food technologist.

"However, it is up to us to choose the best meat and, after purchasing it, maintain and enhance its characteristics, keeping it in the right way. To recognize if a chicken or turkey is really fresh, you must first pay attention to the skin (if any) and the meat. The colore of the former can vary according to the breed and the type of feeding, but it must never appear dry or thickened. As for the second, it must be soft, pink, shiny and moist. And if you smell it, the smell must be very light, without unpleasant scents ».

Then pay attention to transport: If too much time passes between shopping and going home, you need to prevent the meat from overheating. “Even in winter, if you leave it in the trunk for a long time on a sunny day, the cold chain cannot be maintained. Better then to always use a thermal bag for transport », recommends Dr. Donegani.

«Another mistake to avoid for hygienic safety is that of put the package with raw meat and the one with other fresh products in the same bag not packaged, such as fruit and vegetables, for example: the risk of cross-contamination, between one food and another, is always lurking. And not only in shopping bags but also in the refrigerator at home. It is then important arrange everything in the right place: raw and perishable foods, such as meat, in the coldest area; the vegetables in the drawers and so on, according to the indications given on the appliance itself. Also, better not to stock up too much: if the refrigerator is full, the air does not circulate well and the food does not cool down sufficiently. Finally, it is good to separate raw products from cooked ones: any leftovers must always be kept covered or enclosed in containers ».

How to cook it

«The best way, even if little known and used, to cook meat is in oil cooking at low temperature»Assures Dr. Galatà. "This method (described in the yellow box on the side, ed) allows to reduce the chemical reactions of oxidation that lead to the formation of toxic substances and to avoid contact with water (as happens instead with boiling) and the consequent dispersion of the precious vitamins B3 and B12 ».

Whichever cooking technique you choose to use, it is finally important that the meat never remains a little raw. "Most of the warnings for poultry concern cases of salmonellosis: about a hundred a year in our country, according to data from the association Movimento Difesa del Cittadino in Rome. But to defend against this toxinfection it is sufficient to always cook white meat well », concludes Doctor Giorgio Donegani.

The calf is it white or red?

“A distinction must be made. From a gastronomic point of view, meats that are very clear to the eye are considered white, such as calf, precisely. But also how the kid and the lamb»Explains food technologist Giorgio Donegani.

"From a nutritional point of view, however, it would be more correct to consider in this category only the meats that remain white in the adult animal. The calf, in reality, is a young bovine, less than 8 months of age, which has an inactive musculature, lacking in myoglobin (the pigment to which the red color is due), rich in water and with little connective hard tissue. It is for all these characteristics that veal, very tender and digestible, usually comes defined white both on the gastronomic and nutritional front».

What to watch on the label

«The first thing to read on the label is the date of preparation and / or expiration»Says Giorgio Donegani. «Then pay attention to the origin, which must be indicated for fresh and frozen meats also on the tags of the butcher's counters. Since 2015 it has also become mandatory for poultry meat to report the country where the animal was raised and slaughtered.

Moreover, the poultry meat producers of the village had been doing it voluntarily since 2005, to guarantee consumers maximum transparency on the origin after the spread of avian flu in Southeast Asia. If you find written "Origin of the country" it means that the chicken was also born in the country. Finally, the name of the company and the production lot must be indicated on the label to facilitate the traceability of the meat in the event of a health emergency ».

No hormones  nor antibiotics

If you think chicken, turkey or rabbit meat may contain traces of hormones, you are wrong. «The use of these substances is not only prohibited since 2006 throughout the European Union, but it is so little advantageous, from an economic point of view, that it discourages even unscrupulous producers ”, reassures Dr. Giorgio Donegani.

"As for the antibiotics, which can only be used for curative purposes, certainly not to promote the growth of animals, are used less and less and, in any case, they cannot be present, even in very small quantities, in the meat offered for sale, because the checks are numerous and very accurate in our country », guarantees the expert. "But if you don't trust it, at the super look for products complete with certifications certifying that they come from supply chains that do not use antibiotics".

Audio Video White meat, how to choose it and how much to eat
Honey - find out which one is best for you ❯

add a comment of White meat, how to choose it and how much to eat