Washing your hands erases the blame 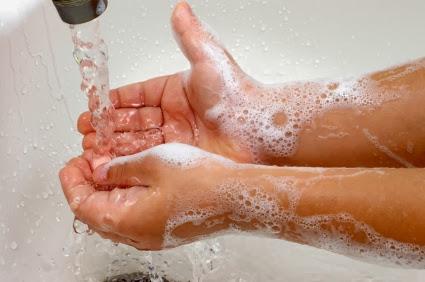 We've probably all used it at least
once the phrase "wash your hands like Pontius Pilate". In popular culture
is used to indicate that we place the responsibility on others or that
we reject the consequences of a certain choice. One way or another
indicates that our consciousness it is in
pace.

Now a new study intervenes a
demonstrate that there is a relationship between the wash
the hands and the feeling of having a clear conscience and that this is a lot
stronger than you think. Some researchers from the University of Michigan
involved a series of volunteers who were asked to remember a
unethical behavior that they had recently manifested (a task that
act as priming).
Later, they gave them some letters and asked them to complete a sentence
or a word. Curiously, people tended to refer to words
related to cleaning. This showed that in our mind, we have
established a strong association between unethical behavior and necessity
to "clean". At the end of the experiment, ai
participants were given a gift; they had to choose from a package of
disinfectant wipes and a pencil. 67% of those who had remembered a
unethical behavior chose the package of disinfectant wipes while
only 33% of those who were asked to remember a good deed chose
the same gift. These first experiments conducted i
researchers to think that physical cleansing is a form for clean up our conscience. For
to prove this, they involved other volunteers by asking them to describe a
unethical behavior they had had in the past. Some of these were offered one
disinfectant wipe to clean their hands. Later, it came to them
asked that they help some students they were looking for volunteers for
carry out an experiment (aid that would not have been economically remunerated). What happened? Only 41% of the people who were
wash your hands using the washcloth agreed to participate in the new study.
Instead, those who did not have the opportunity to wash their hands with the towel
mostly agreed to participate in the new study (74% gave their opinion
availability). These results make us think that,
once we have washed our hands, we feel our conscience more
quiet and we do not feel the need to help others in an action of
compensation for the harm we have caused. Washing your hands eliminates doubts Either way, washing your hands doesn't help
only to clear the conscience but also allows you to "turn the page" in life,
as it helps us eliminate doubts about the decisions we have
recently taken. This idea comes from a study
made by the University of Michigan in which a group of
students check 30 different CD covers as if it were one
direct interview with consumers. Participants had to choose 10 discs
they wished to own, classifying them according to the degree of preference. They later completed an interview
relating to the product that had no relationship with the music but with a certain one
liquid soap. Half of the study participants were only given time
to examine the soap bottle before answering but the other half
he was allowed to wash his hands with the same. Later, they were asked to classify
the discs again. The people who had only examined the soap bottle
they doubted the decision and in many cases changed theirs
criterion. However, the people who had washed their hands did not waver and
much less did they change the criteria for selecting CDs. Researchers claim that these
results show that, in the same way that hand washing can free us
from guilt over immoral behavior, it can also ease the stage
decision-making on recent choices. Why does this happen? A possible explanation would point us out
that hand washing implies the finalization of an activity and the
willingness to face another. In daily life, we wash the
hands when we finish one activity or prepare for another but hardly ever there
we wash to keep doing the same thing. For this, it is likely that in the
our mind associates washing our hands with the conclusion of a given
activity.
The avatar: how does it affect our decisions? ❯

add a comment of Washing your hands erases the blame