Wall Sit | Isometric squat, how is it performed?

The wall sit (also known as "wall chair" in your local language) is one of the best isometry exercises for the lower limbs.

This apparently trivial exercise (I remember infinite warm-ups in the hours of physical education in middle school using this type of isometry) must however be considered among the advanced exercises as all the exercises in isometry.

Although the execution is quite simple, an untrained athlete would be able to resist a short time in the correct position, risking to change their posture with a consequent increase in the probability of injuries.

On the other hand, however, in a bodyweight version, the wall sit could be used in small doses as a prerequisite for the squat for those who have recently entered the gym ... in short, an exercise that is not simple but in small doses and with criteria it can be used by novices and not.

The muscles most involved are those of the lower limbs, in particular quadriceps, calves and buttocks.

Recall that since this is an isometry exercise (muscle contraction in the strict sense, without shortening and lengthening the muscle), the benefits are multiple: the basic principle is to reach a state of muscular exhaustion, imposing a contraction not generated by movement, but by the maintain a static position trying only to oppose your own weight strength (possibly added by overloads in the case of very hard workouts).

The resulting benefits are an increase in muscle mass, tone and strength. 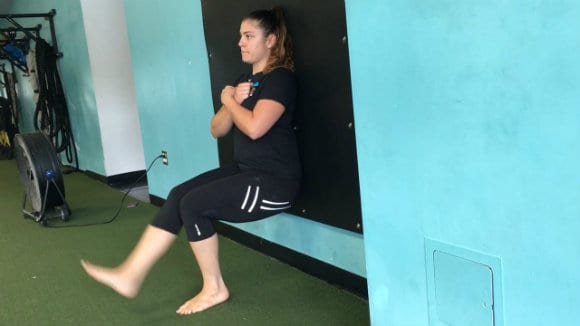 The execution of the wall sit is quite simple from the point of view of posture ... the main problem is to maintain the correct position for the time required. 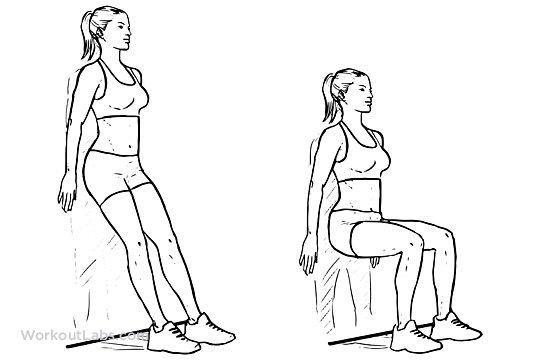 The main mistakes that can be made in the wall sit can be summarized as follows:

More advanced athletes can venture into some progressions (we'll see two of them) to vary the stimulus of the wall sit and make their workouts more fun.

In this case, the element different from the classic case is the weight to be won: using an overload, maintaining the isometry for the same time will be a very difficult undertaking.


For example, you can use a kettlebell held as for the execution of a goblet squat, with both hands on the sides of the handle and the elbows wedged on the hips, forming the classic "goblet" posture. 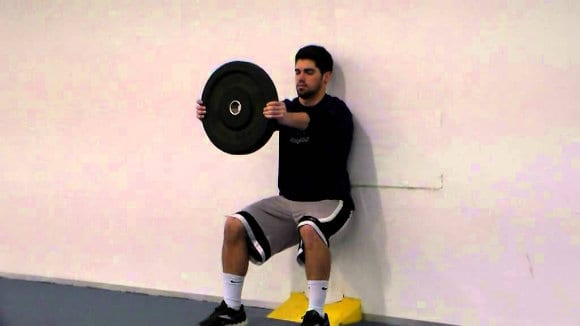 In this case, the increase in difficulty lies in the “unbalcance” component inserted by a balance board or a bosu ball.

The position to be maintained is the same as in the bodyweight case with the difference that the feet are positioned on the imbalance tool, thus making the workout even more functional especially for sports such as hockey, skiing and skating.

Nobody forbids, for example, to combine both progressions by performing a wall sit with overload resting on a balance board.

The applications of this exercise are so many that it is impossible to list them all, as the purpose of the training could focus on multiple objectives, so I will limit myself to giving an example for a basic workout and one for a really grueling workout.

Little time to train your legs? let's set aside 4 minutes all for them at the end of the workout, doing a nice tabata where our wall sit will be the rest:

20 ": perform as many goblet squats as possible (with a not too high load, for example a 16 kg kb for a man)

10 ″: “rest” in wall sit keeping the kettlebell in the chest with the elbows tight

Note: to make the workout even more stimulating, especially if in a group, count the repetitions performed every 20 ″ and keep in mind the lowest number of the 8 series. At the end of the workout, compare yourself with your teammates and the athlete who has scored the fewest repetitions performs 50 burpees in front of their teammates. Seeing is believing.

Audio Video Wall Sit | Isometric squat, how is it performed?
Warm Up in 5 Minutes | Top 3 Exercises to Warm Up ❯

add a comment of Wall Sit | Isometric squat, how is it performed?