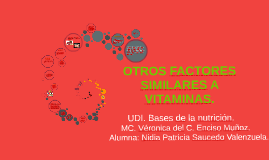 Vitamin-like factors are substances that behave similarly to vitamins.

Among the vitamin-like factors, one has been the subject of particular interest by the scientific community, paraminobenzoic acid or PABA, also known as vitamin B10. It is a constituent factor of folic acid (vitamin Bc); moreover, an equally important feature, PABA acts as an antagonist towards sulfonamides, drugs once used as antibiotics (but now obsolete) and which are still used today in the treatment of nocardiosis (granulomatous infection by Nocardia, saprophytic bacterium of the soil).

Orotic acid (commonly called vitamin B13) is a vitamin-like factor that acts as a precursor of the nucleic acids deoxyribibonucleic acid and ribonucleic acid - DNA and RNA); it is synthesized ONLY within animal organisms where it is crucial for various physiological mechanisms. Orotic acid and bream (salts of orotic acid) are also essential for the absorption and transport of many trace elements (mineral salts).

Carnitine or vitamin BT is one of the most well-known vitamin-like factors in sports and dietetics; it is found in almost all animal tissues and, placing itself in a specific locus of the mitochondrial membrane, acts as a transporter of fatty acids allowing them to enter the organelle. Carnitine is mainly present in muscle cells and its dietary deficiency can be compensated for through endogenous synthesis starting from lysine and methionine, two essential amino acids; on the other hand, a deficiency of carnitine and its precursors could also determine a partial malnutrition characterized by chronic fatigue and myopathy, due to the pathological accumulation of lipids (triglycerides) in the cytosol of muscle fiber cells. It is important to reiterate that the mitochondrial locus on which carnitine is inserted are influenced by genetics, therefore, the cellular levels of this vitamin-like factor are extremely variable based on: 1. subjectivity, 2. level of muscle training. In summary, the integration of carnitine (in healthy subjects and eunutriti) does not determine an increase in lipid oxidation.

Choline or vitamin BJ represents one of the vitamin-similar factors of greatest interest; it is an essential molecule for the biosynthesis of acetylcholine, a neurotransmitter of the nervous system. Not least, choline is also a constituent of phospholipids (real "pieces" of cell membranes); represents the precursor of betaine, a protective molecule from osmotic stress, aridity, high salinity and high temperatures, and plays a very important role as a hepato-protective factor preventing the deposit of fats in the liver (fatty liver disease). In foods, choline is found mainly in egg yolk, wheat germ and liver.

Last but not least of the other vitamin-like factors, inositol; this polyol (not a carbohydrate) is a constituent of some phospholipids, plays an important role in the transport of substances across cell membranes and acts as a secondary messenger of eukaryotic cells (for example, human cells). In foods, inositol is abundant in some grains.