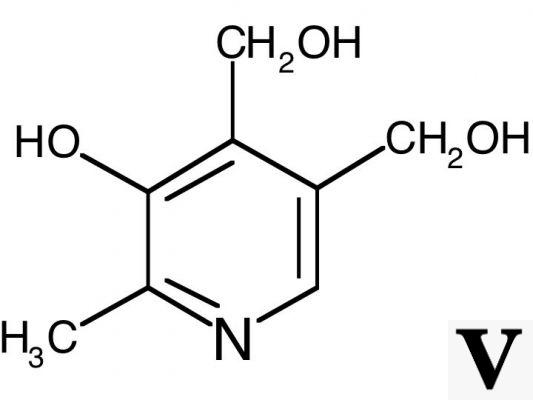 B6 means one vitamin water-soluble belonging to the group of complex B.

Actually, with the term Vitamin B6 we mean the three derivatives area of 2-methyl-pyridine (2-methyl-3,5-dihydroxy-methyl-pyridine) which have the same biological activity:

Note: Vitamin B6 and pyridoxine are often used as terms synonyms.


Pyidossine comes phosphorylated to pyridosine 5'-phosphate, which is then oxidized a pyridoxal 5'-phosphate, whose aldehyde group has the ability to react with the primary amino groups giving Schiff bases and making the amino acid molecule sensitive to numerous reactions.

The primary function of vitamin B6 is of coenzyme to support various enzymes mainly involved in the metabolism of amino acids.

In the intestine the 5-phosphate group of each form of vitamin B6 comes hydrolyzed by specific phosphatases, subsequently the vitamin is absorbed for passive diffusion; in the cytosol of intestinal epithelial cells the vitamin comes again phosphorylated and here retained until transformation into pyridoxine phosphate. Some factors such as technological treatments, the adsorbing power of dietary fiber and the presence of vitamin B6 analogues (hydroxy-pyridoxine or glycosylated pyridoxine) can limit la bioavailability.


La most of the vitamin is deposited in the liver and subsequently transported from the plasma to the tissues in a dephosphorylated form. The pyridoxal in excess is converted to 4-pyridoxic acid and eliminated with urine.

He pool total of vitamin B6 in the human body is approx 1 mmole el '80 ÷ 90% is concentrated in the muscle mainly in the form of pyridoxal phosphate bound to glycogen phosphorylase.

Pyridoxal phosphate serves as coenzyme of many enzymes involved in metabolism of fundamental amino acids; the binding of pyridoxal phosphate with apoenzymes occurs through the formation of a Schiff base between the C ketone of the coenzyme and the e-amino group of a lysine residue of the apoenzyme.

Vitamin B6 intervenes in the reactions of:

Severe hypovitaminosis in moles is known Infants fed with inadequate commercial formulas, which manifests itself with CNS disorders (convulsions).

The shortage in the rat is known and manifests with dermatitis (tail, legs, ears, nose and around the eyes) accompanied by stunted growth, edema, hypochromic anemia and nervous disorders.

Vitamin B6 is widely distributed in foods, but is found especially in muscle meats, offal, Some fish, not very refined cereals (found predominantly in the barm and in the layer aleuronico), legumes, nights.

Vitamin B6 is found especially in foods of plant origin tied to proteins or non-protein compounds (glycosides) that make it unavailable, therefore it is provided in greater bioavailability from the food of origin animal.

The recommended ration depends on the amount of protein ingested, the LARNs recommend for adults 1,5 mg / 100 g of dietary protein / day. An increase of 20% and 30% respectively is expected for the pregnant woman and the nurse.