Vegetarian Diet: What It Is and How It Works 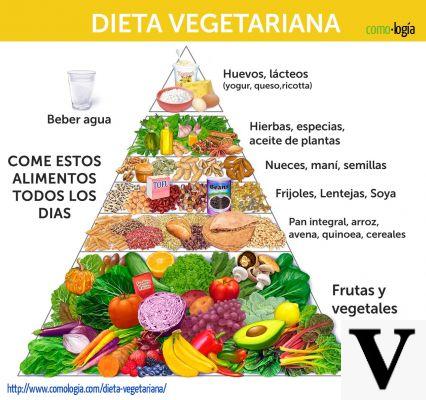 The interest in the vegetarian diet has increased a lot in recent years, also thanks to the uproar caused by recent events such as avian flu, the so-called "mad cow", the relationship between red meat and cancer, or repeated episodes of maltreatment animals in intensive farming.

Many people adhere to this dietary model driven by ideological considerations, others only because they consider it a particularly effective and healthy diet.

The vegetarian diet has very ancient roots and, as we have said, the reasons that push a person to adopt it can be numerous (religious, ethical, economic, ecological, health-conscious, etc.).

In this article we will focus above all on the health aspect, analyzing the strengths and weaknesses of vegetarian diets and proposing some examples of a correctly balanced vegetarian menu.


Let's start by specifying the various types of vegetarian diet.

How many types of vegetarian diets are there?

In the common imagination, the vegetarian diet is often understood as a simple diet, devoid of products of animal origin. In reality, the concept is much broader, given that different dietary models can be included in the large family of vegetarianism; let's see them in detail.

The lacto-ovo-vegetarian diet allows you to feed on plants, microorganisms (molds and bacteria) and foods deriving from animals, such as eggs, milk, cheeses and honey. Instead, it excludes the consumption of meat and fishery products (including molluscs and crustaceans).

Warning! It is good to remember that some cheeses are obtained by adding rennet from animal (stomach enzymes of calves); as such, they should be excluded from any vegetarian diet.

Many dairy companies have adapted to the needs of vegetarians by replacing the rennet animal with one vegetable.

The lacto-vegetarian diet also excludes eggs, but milk and derivatives are allowed; consumption of honey is at the discretion.

The ovo-vegetarian diet also excludes milk and derivatives but not eggs; consumption of honey is at the discretion.

The vegan diet forgoes all products that involve animal involvement, including eggs and derivatives, such as dairy products and honey. It represents the vegetarian diet "in the strict sense".

Recall that the vegan philosophy does not allow any animal involvement for the benefit of the human being. That is excludes also the use of lana e set for clothes, drugs obtained by means of animal experimentation, And some i fertilizers used in agriculture (especially blood, bone and horn meal, and fish meal).

The use of manure è controversial, since the suitability depends on the origin (the one deriving from farms is to be excluded), just as some vegans do not allow biological struggle in cultivation (which is based on the biological antagonism of some organisms, on entomological traps, etc.).

It is a vegan diet based only on the consumption of raw fruit and vegetables or processed at temperatures no higher than 40 ° C.

It is a vegan diet similar to the traditional one, but which requires the consumption of only plant foods from organic or bio-dynamic crops.

According to its supporters, the vegetarian diet (in all its types) is able, alone and without supplements, to meet the recommendations for all nutrients. As we will see below, this is at least a questionable claim. It can certainly have a positive metabolic impact and, in some ways, favor the maintenance of health. Let's see how.

What are the benefits of vegetarian diets?

The diet Vegetarian food balanced, associated with a lifestyle Howdy, can reduce the risk of these diseases related to modern lifestyle:

The vegetarian diet is not always related to a normal body mass index. Conversely, many disorganized and poorly managed forms of vegetarianism can promote overweight.

This is the case of nutritional regimes which are mainly based on the consumption of white pasta and bread, potatoes, fatty cheeses, oil seeds and seasoning oils in abundance. On the contrary, vegetarian diets rich in fresh vegetables and with the right amount of fruit, cheeses, eggs, cereals, oils, oilseeds and tubers, should favor the maintenance of a BMI between 18,5 and 25,0 (normal). .

We associate these two metabolic imbalances since blood triglycerides increase due to hyperglycemia, the characteristic factor of type 2 diabetes mellitus and pre-diabetes.

Not all vegetarian diets are preventative against type 2 diabetes mellitus and hypertriglyceridemia.

Only those rich in fresh fruit and vegetables, whole grains and derivatives, and leguminous plants that are not peeled are considered beneficial.

Hypertriglyceridemia is improved by the abundance of alpha linolenic acid (polyunsaturated omega 3 essential).

On the contrary, single-issue vegetarian diets based on cereals and refined derivatives can cause an increase in blood sugar, triglyceridemia and promote the onset of diabetes (as well as overweight).

This occurs thanks to the lack of cholesterol and saturated fats in the foods consumed, but also due to the richness of beneficial fatty acids (especially the essential polyunsaturated omega 6 linoleic acid) and other nutritional factors that exert a positive metabolic impact (polyphenolic antioxidants, vitamins A, C, E, plant lecithins and phytosterols).

Vegetarian diets that include fried foods and foods belonging to the category of junk food (sweet and savory snacks) are characterized instead by the abundance of tropical oils (tend to be saturated) and / or hydrogenated fatty acids (which have the same metabolic impact as saturated).

The exclusion of preserved meats and fish (cured meats, sausages to be cooked, canned tuna, etc.) has a positive effect on the onset of sodium-sensitive hypertension. Furthermore, the essential polyunsaturated fatty acid omega 3 alpha linolenic acid, abundant in certain oilseeds and oils, has a marked hypotensive effect.

Vegetarian diets are also rich in potassium and magnesium, two minerals that hinder the action of excess sodium to the benefit of blood pressure. However, it must be specified that vegetarian diets exert a preventive role against hypertension only when they allow to maintain normal weight and do not make abundant use of aged cheeses, preserved foods and added salt.

Scientific data are difficult to interpret.

The consumption of fruit and vegetables seems to be associated with the reduction of the risk of onset of vascular diseases.

This is because, for various reasons, vegetarian diets improve metabolic pathologies and decrease the process of atherosclerosis.

Furthermore, they could have a positive effect on blood fluidity and decrease the risk of platelet aggregation; this prevents clumping of thrombi potentially responsible for embolism and stroke. The vegetarian diet statistically decreases mortality from this disease.

However, some believe that vegetarian diets may be responsible for hyperhomocysteinemia (due to vitamin B12 deficiency), a very important risk factor for vascular diseases.

The bibliographic data concerning the correlation between diet and cancer are not entirely clear and are sometimes even conflicting.

For example, many believe that the consumption of proteins of animal origin can favor the appearance of certain cancers. In such a case, vegetarian diets would certainly play a preventive role.

On the other hand, the scientific evidence in this regard is not absolutely clear or well defined.

Instead, it has been shown that the richness of fiber and plant antioxidants (vitamins, polyphenols, etc.) can have a preventive effect against cancers of the digestive tract.

What are the downsides of vegetarian diets?

The classic problems of the vegetarian diet concern the presumed lack of iron, vitamin B12, vitamin D, proteins and calcium (only if milk and derivatives are also eliminated from the diet). While it is true that it is possible to satisfy the needs of these nutrients by avoiding the use of animal products, some very important aspects must be taken into account:

Enter the kitchen of MypersonaltrainerTv and discover many vegetarian and vegan recipes.

Audio Video Vegetarian Diet: What It Is and How It Works
Vegetarian diet: is it suitable for children? ❯

add a comment of Vegetarian Diet: What It Is and How It Works