Vegetarian calculator: how many animals do we eat in our life? 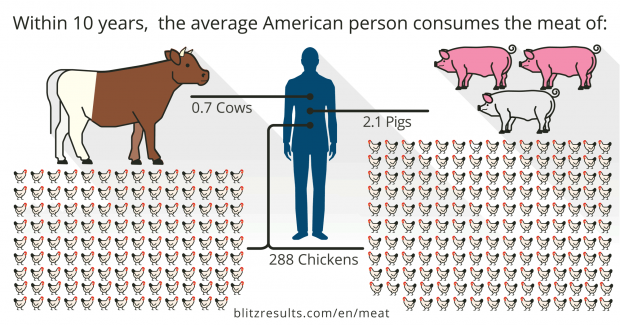 The choice of limit the consumption of meat very often it has an ethical origin, such as animal defense. And it is precisely on the people who are most sensitive to these issues that he tries to leverage Vegetarian Calculator,which tries to quantify and put pen to paper number of animals that each of us eats in the course of a lifetime.

According to the site, on average one person eats about 7.000 animals during its existence. It would involve 11 cows, 27 pigs, 30 sheep, 80 turkeys, 2.400 chickens and 4.500 fish. Isn't it impressive? However, if you already have a veg diet, the website allows you to enter the number of months or years since you have been a vegetarian to calculate how many animals have you 'saved', how many kilos of meat you have not eaten as well as how much CO2 you have helped to reduce.

The site is based on data from a 2008 USDA report. It is one fun and fascinating instrument, although the results might turn out to be pretty rough in truth. For a more mathematical and complex approach, it would be interesting to understand better how to count animals.

Also on display on the site effects on the environment, being the breeding of animals destined for consumption among the main causes of global warming, with an impact even greater than that of cars. Regardless, the message is clear: one plant-based diet saves animals, health and the planet.

The hoax of vegetarians who kill more animals than those who eat meat
25 things a vegan has heard of at least once in their life
5 additives of animal origin: the cruelty you don't expect

Audio Video Vegetarian calculator: how many animals do we eat in our life?
Capitone: 5 reasons not to eat eel at Christmas and New Year's Eve ❯

add a comment of Vegetarian calculator: how many animals do we eat in our life?