Vegan zombie: from the web series a comic book to cook veg with the living dead (video)

It is the only web series that combines zombies with vegan cuisine. On Youtube it has more than more than 100 videos, 25.000 subscribers, over 1,4 million views and on Facebook it has over 20 fans. It is called "Vegan Zombie" and recently raised 43.500 in donations on the Kickstarter crowdfunding platform to fund the publication of a cookbook, far beyond its $ 18.500 goal.

“In 2009 we launched a vegan cooking series set in the midst of a zombie apocalypse. What began as gods videos about some of our favorite recipes, it quickly turned into something insanely popular on the internet. In a few months, The Vegan Zombie channel was getting thousands of views and dozens of comments a day appeared on our videos ”, say the creators.

The idea was simple. And it worked: what made the episodes fun and viral was the story. in the series, in fact, those who ate meat, eggs and dairy products were infected with the virus and transformed into zombies. How did you survive in this reality? The survivors explained it, giving advice and suggestions on how to stay safe from zombies and teaching how to make delicious vegan recipes. All seasoned with special appearances of "hungry" zombies. 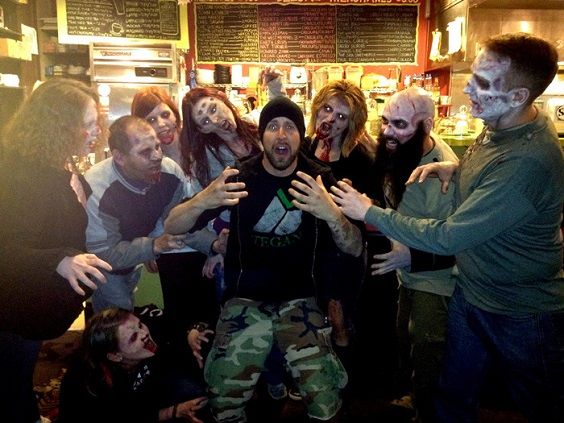 But viewers wanted more and have long since begun to request publication of a collection of recipes of the web series. And today, with the help of the Kickstarter campaign, their request was granted also thanks to them who supported it financially. The book, however, is not a common culinary collection, but a your city full color graphic illustrating the adventures of The Vegan Zombie, with over 150 pages and more than 80 vegan recipes, terrifying photos and artwork to flesh out the zombie story.

The ultimate goal? "It's not just for vegans, it's for omnivores, vegetarians and people who want to be healthy, as well as anyone who loves the horror genre," explains co-creator Chris Cooney, who, in this way, it hopes to do its part in spreading a more respectful lifestyle towards animals. Because everyone "survives" with veg cuisine.

- Il Cucchiaio Arcobaleno, all the colors of vegan kitchens in the world

add a comment of Vegan zombie: from the web series a comic book to cook veg with the living dead (video)