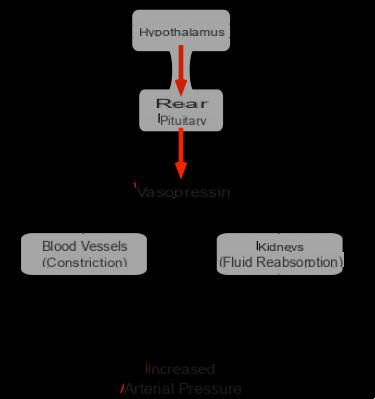 Vasopressin, also known as antidiuretic hormone (ADH) or diuretin, is a peptide substance secreted by the posterior pituitary but mainly produced at the hypothalamic level.

Vasopressin plays an important role in regulating plasma volume, and as such helps to keep the liquid part of the blood, called plasma, constant.

The antidiuretic hormone favors the reabsorption of water in the kidney (more precisely in the distal tubules and in the collecting ducts of the nephrons), opposing the production of urine (or diuresis); hence the name antidiuretic. The higher its level, the less urine will be produced and vice versa. In the absence of vasopressin, a disease known as diabetes insipidus, the person excretes 18 liters of urine per day; as a result, he is forced to take at least 20 liters of fluids in his diet.

If the adjective "antidiuretic" clearly expresses the physiological action of this hormone, the same can be said of the synonym "vasopressin". ADH, in fact, has a second and important action linked to its vasoconstrictive capacity. By decreasing the caliber of the arterioles, vasopressin is in fact capable of increasing blood pressure, even significantly when it is secreted in high quantities.

In emotional life, and especially during pregnancy, labor and breastfeeding, vasopressin seems to have effects opposite to those of oxytocin, hindering emotional bonds.

The release of the hormone will therefore be favored by various conditions, the best known of which is the decrease in plasma volume, for example following severe dehydration. According to the laws of physics, a decrease in the volume of circulating blood inevitably leads to a reduction in blood pressure; hence the importance of the combined antidiuretic-hypertensive activity of this hormone is explained. The secretion of vasopressin also increases in other conditions, for example when the concentration of dissolved substances in the blood increases (it means that it is necessary to increase the volume of the liquid part), when blood pressure is reduced, but also in case of strong emotions, stress , pain, nicotine intake and exercise.

The release of vasopressin is reduced in the opposite conditions to those listed above, and following the intake of high doses of alcohol.

Vasopressin is also linked to estrogen levels: it is higher in the preovulatory and ovulatory phase, compared to the progestin phase of the menstrual cycle.


The biological actions of vasopressin have been and are still exploited in therapy in the treatment of various diseases; this hormone and its analogues, natural or synthetic (argipressin, desmopressin, felipressin, lipressin), can be used in the treatment of diabetes insipidus itself, gastrointestinal bleeding and enuresis (uncontrolled loss of urine during the night).

An exaggerated production of vasopressin (a fairly rare condition) can occur in the presence of a pituitary adenoma or in the case of an ectopic production of the hormone (as occurs, for example, in lung cancer).

add a comment of Vasopressin or antidiuretic hormone (ADH)