The up right row (pull to the chin) is a movement that belongs to the so-called "iron graveyard”And for good reasons.

Chin pulls are a harmful exercise because they put the shoulder in a very risky position and combine this position with a fair load.

Maybe this exercise does not give problems in the short term but in the long run there is a good chance that the delicate ligaments of this joint will be damaged, as well as the long head of the bicep becomes inflamed or (if not all these problems occur at the same time) the rotator cuff is damaged.

Le up right row they are usually performed with the barbell and with a grip equal to shoulder width if not less. the movement is started by retracting and lowering the shoulders and the barbell is literally pulled up to the height of the collarbones or chin and then returns to the starting position.

The stimulation for the elbow flexors is also not to be underestimated. The problem is that the more the contraction of all the muscles involved is intensified, the more the elbows exceed the height of the hands. This is a problem because it means that the shoulder is in a position of intra rotation. 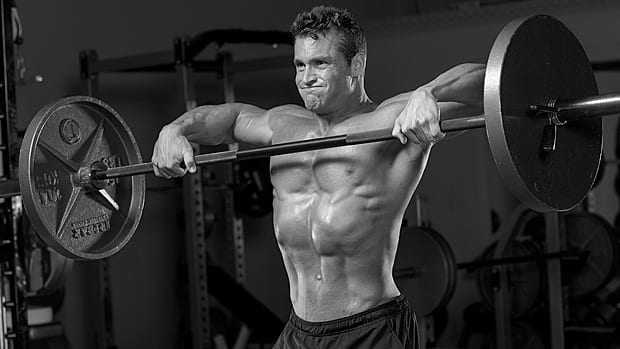 When the shoulder is intra rotated, the space inside the cavity that accommodates the head of the humerus is reduced and this is a big problem.

Finally, a final problem is that the ligaments of the shoulder suffer the same fate just described.

The main problem of the classic pulls to the chin is mainly the intra rotation that characterizes the phase of maximum contraction, moreover this is favored by a tight grip that works better the muscles concerned and widens the ROM but accentuates this risky position.

The solution is simple: abandon the barbell, which forces you to maintain a fixed grip, however choose dumbbells that allow greater freedom. You can then perform an up right row with the dumbbell and, so that you can focus more on a precise movement (in order to avoid unnecessary risks), perform the exercise on one side at a time.


The final exercise should be as follows: Choose a dumbbell appropriate to your strength, roughly equal to one third of the weight used in a maximum repetition of the over head press (slow forward). Stand near a support so that you are standing on the side that you are not training. 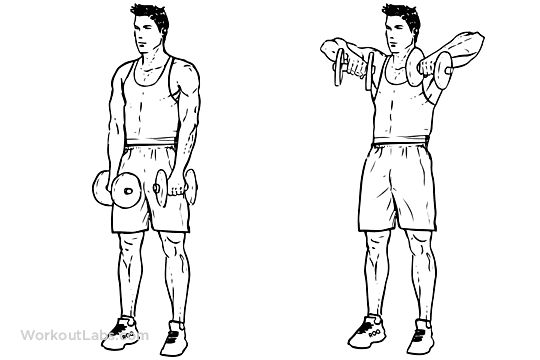 Bend your torso slightly forward and keep the thoracic spine in extension. Begin the movement by lowering and retracting the shoulder blades, from here pull the dumbbell upwards but this time rotate the shoulder so as to bring the hands higher than the elbows in the position of maximum contraction. The maximum height reached by the dumbbell should be approximately that of the collarbones.

The hand, in this position, should be slightly higher than the elbow. Hold the position for a second and check the negative phase. When pulling the dumbbell upwards it is helpful to imagine that you are bringing your elbows outwards in order to recruit more the central deltoid and at the same time extra rotate the shoulder.

This exercise can be incorporated one to three times into your weekly routine.

A good scheme could be 3 or 4 sets of 8-12 reps. Focusing on correct technique and muscle contraction are the key elements of this exercise.

Audio Video Upright Row | Barbell Or Dumbbells?
Muscular vigor or dysmorphophobia | What is that? Find out if you suffer from it ❯

add a comment of Upright Row | Barbell Or Dumbbells?