Types of Cooking in Water

Water is a widely used cooking medium, both for the transmission of heat and for the diffusion of aromatic components. Based on the nature of the food and the PURPOSE of cooking, the food can be cooked in cold water, hot water, under pressure or in a water bath. 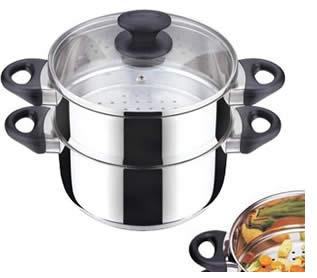 Cooking in water does not involve the formation of toxic or carcinogenic catabolites, but causes the dilution / dispersion of water-soluble substances (minerals and vitamins).

Boiling consists in immersing the food in hot or cold water, maintained or brought to a temperature of about 100 ° C.
The different foods can be boiled in cold or hot water according to the nature of the preparation to be pursued.
In cold water: meat and bones for the broth (favor the loss of water-soluble substances); dried legumes to soften the peel; potatoes for effective cooking.
In hot water: meat for boiling (avoid the loss of water-soluble substances), pasta for proper cooking.
Bleaching and blanching are two techniques that are applied in some foods and are practiced in boiling water without a lid. Bleaching is a technique applicable to certain vegetables, while blanching is a real pre-cooking.

The affogatura consists in slowly cooking food in water or in a bottom of vegetables and water. It is carried out with low (80 ° C) and prolonged cooking, occasionally checking the condition of the food (it can also be done in a bain-marie).
The foods that lend themselves to poaching in WATER are: eggs, sausages, gnocchi. The foods that lend themselves to drowning in the BOTTOM are: fish and birds.

Principle of steam and pressure cooking

In the steam cooking system, the food comes into contact with water in the gaseous state and suffers fewer losses than when boiled; it can be cooked in the steam cooker or in the pressure cooker, but always using the BASKET with a perforated bottom that houses the food to be cooked. On the bottom is placed the water that evaporates by means of the flame and transmits the heat to the food; in the steam cooker (not under pressure), the level of water at the bottom must be constantly present.
In steam cooking, the higher the pressure inside (1,4-1,5, up to 2 total bars), the higher the boiling point and consequently the cooking temperature; with this technique used by pressure cookers the dispersions are reduced BUT the losses of thermolabile vitamins increase.
The most suitable foods are: vegetables and cereals, potatoes, fish and meats.


Other articles on 'Cooking in Water, Steam and Pressure'

Audio Video Types of Cooking in Water
Pressure cooker: how to choose the best one ❯

add a comment of Types of Cooking in Water