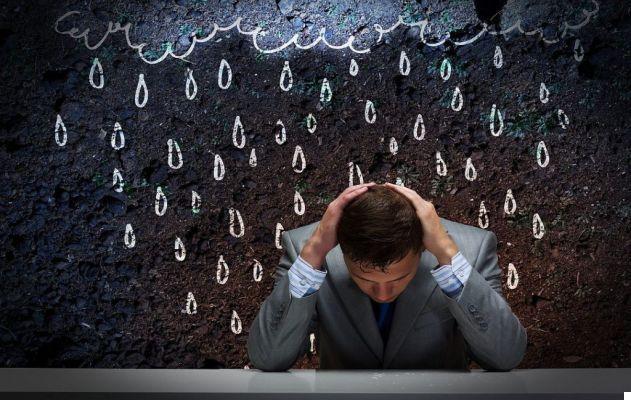 Do you remember the last time you experienced an unpleasant emotion that you wanted to eliminate at all costs? A feeling of any kind, from shame to anger or sadness. Try to remember what your first reaction to that emotion was. You've probably felt a compelling need to make the feeling go away, felt inadequate, or thought something was wrong. So, you've probably done what you can to immediately stop the sensation by telling yourself that you don't have to feel this way, but if the emotion was very intense it is likely that whatever you did did not work. In fact, it has been shown that trying to fight or control emotions, feelings and thoughts only serves to focus attention on them and make them grow. The more you struggle to control them, the more they will strengthen and end up controlling you. The underlying problem is that society has taught us that there are "negative" emotions that we should never feel. Therefore, when we experience them we feel uncomfortable, and we want to regain control immediately. Thus, often what worries us most is not the emotion itself, but the feeling of discomfort it generates because we consider it "unacceptable".

In 1987, Trinity University psychologists recruited a group of people to carry out a seemingly simple experiment: They were simply told that they didn't have to think about a white bear. Whenever they thought about it, they had to ring a bell.After this period of conscious repression, the researchers asked people to think about what they wanted, including a white bear. Again, when the image of the white bear came to mind, people would have to ring a bell, another group of participants was also told about a white bear, but they were not asked to try to suppress this thought. . Interestingly, the people who should have removed the white bear image from their minds were the very ones who thought about it most often.

The problem is that to avoid thinking about something we activate an internal control mechanism to help us identify the thought or image in question and that we want to avoid. This mechanism, contradictorily, only serves to activate the thoughts that we would have liked to avoid.This phenomenon does not apply only to thoughts but also to feelings and emotions. In fact, it is especially noticeable when we feel ashamed. The more we think about the shame we feel the more it increases and the more intense its physiological expressions are. When we think “I'm nervous, I have to control myself or everyone will notice”, this feeling of nervousness will increase. Our hands begin to sweat, we will blush and perhaps we will even begin to stammer or we will freeze completely.We tend to think that these symptoms are activated by emotions, but in reality they are intensified by the importance we give to the emotion in question, by the negative value that we attribute to him. It is not just the emotion itself, but the thoughts and analyzes we make of our reaction that trigger these unwanted symptoms.

Those who resist persist

Imagine the emotions that make you feel uncomfortable are like a bad friend. This friend may have helped you solve some problems, but he usually spends most of his time criticizing you. Obviously, the first reaction is to get rid of him, but when you try to do that, he attacks you by claiming that you are a bad person. At this point, it is possible that you will get angry and argue with him until the situation gets out of hand.This is exactly what happens when we try to control emotions, especially those categorized as negative. And the problem is even greater because, in some way, we are afraid of these emotions, because we think they say something negative about us as people, so we empower them.The problem behind our desire for control is that this actually involves repression means that we do not accept something ... and what we do not accept, we can hide it, but it will continue to exist. Thus, emotions end up controlling your life and you end up feeling good or bad depending on what you encounter in your path, you end up being an eminently reactive person, with no control over your happiness, perpetually on a roller coaster of your emotions.

What is the solution?

For several years now, psychology has been talking about emotional management. It is a different perspective that teaches us to accept the existence of emotions without judging them. We simply learn to identify them, notice them and let them go. There are several techniques, such as "Leaves on the River", that serve this purpose. The secret is that we must not categorize them as negative or reject them, so the emotions lose their strength and we get rid of their influence. If you don't resist, the emotions will go away as they came.
Psychology and passwords ❯