La Treviso (Chichorium intybus) is a variety of chicory rich in fiber and vitamins and very low in sugar and fat. From the properties depurative, is able to promote metabolism. Let's find out better.

> Description of the Treviso area

> Property of the Treviso area 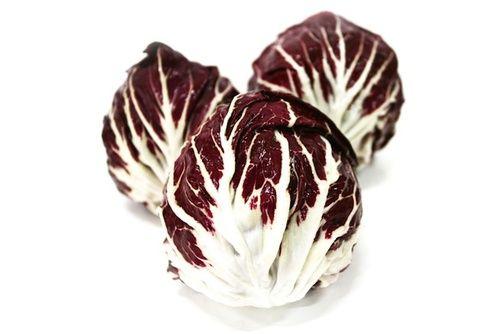 The Treviso, or the Radicchio Rosso di Treviso is a variety of chicory (Chichorium intybus) belonging to the Composite family. Its peculiar characteristic is the color, intense dark red, crossed by white streaks. The taste is slightly bitter while the texture is crunchy.

There are two variants of radicchio: the red radish early (the least valuable) e the late radicchio.

In the first case, the leaves are wider and bitter, its cultivation is autumnal and takes place in open fields and the tufts are tied to force the internal blanching until they reach maturity.

The late radicchio, on the other hand, has elongated leaves and its cultivation is more complex. This is also grown in the open field but can be harvested only after harsh frost and placed for 15-20 days, with the whole root, in tanks with water at a constant temperature between 12 and 15 degrees, to favor and complete the bleaching and to obtain a less bitter taste.

Only after this process, the Rradicchio receives the name of Radicchio Rosso di Treviso tardivo IGP.

Calories and nutritional values ​​of Treviso

The Trevigiana also has the following contents:

Property of the Treviso area

Treviso red radicchio is rich in water, and for this reason it has a purifying action, rich in fiber and bitter substances, which make it a useful vegetable for the intestine and against difficult digestion.

The low calorie content of radicchio also makes it suitable for diets and controlled diets.

The calcium and iron present in the Treviso area are capable of promote bone metabolism making them stronger; the anthocyanins present in it have preventive properties against cardiovascular diseases, while tryptophan brings benefits to the nervous system by counteracting disorders related to insomnia.

Trevigiana contains antioxidant substances, thanks to this characteristic it has the property of slow down cellular aging and to prevent the onset of some types of cancer, especially in the intestine.


The antioxidants contained in radicchio are useful for the beauty of the skin and against arthritis and rheumatism.

To take advantage of the nutritional properties of Trevigiana it is advisable to use it very fresh, because the nutrient content is reduced as it ages.

The Red Radicchio of Treviso PGI it is a typical winter vegetable that can be used in the kitchen not only raw, in salads, but also cooked in first and second courses. Furthermore, radicchio is also used for the production of flavored beer and natural herbal teas.

To enjoy the properties of the Treviso area it is advisable consume the raw leaves in salads, or use an infusion of leaves (2-3 g in 100 ml of boiling water) to be consumed before main meals.

Trevigiana can also be used to eliminate skin impurities: apply 50 g of crushed Trevigiana mixed with a little hot water on the affected area.