Trampoline (Rebounding) | How to use? Benefits?

By the healthiergang writer , personal trainer with a degree in Exercise and Sports Sciences.

For some years now, in gyms all over Europe, it has appeared a new training tool, which may not have depopulated, but which we now see used quite often, both in fitness classes and in the weight room; I'm talking about Rebounding, or trampoline.

The first appearances of this object can be found in the telesales of private TVs since the second half of the 90 ', but it is only around 2010 that some trainers had the brilliant idea of ​​structuring an entire working method around us, starting to sell it of course!

But the question is: it really works, or is it just another piece of equipment stacked on the sides of the fitness rooms or under the bed at home?

In reality the trampoline is a very special tool that has its own precise location within a training program, but that like all tools it should not be used at random, nor should it be bought in the hope of solving all our problems with 10 minutes a day. 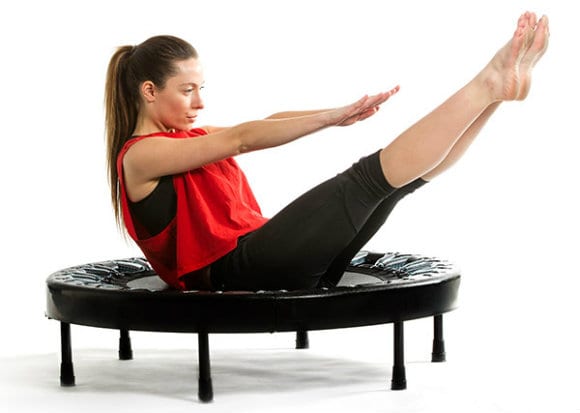 First let's start by saying that the carpet can be used in 3 ways:

The first option allows us to use the mat in the simplest way (but potentially the most intense), or to carry out cardio workouts (in time to music or not) in which you jump on the mat using the elastic phase and, if you wish, also performing sequences of steps or simple choreographies (method used in the lessons group).

It must be said, however, that the basic movement on the mat does not mean getting on it and starting to bounce like crazy balls, but you have to check the movement, keeping the back straight, the knees semi-flexed and always keeping the forefoot in contact with the surface of the tool, to avoid damage to the knees and joints.

When you have a good control of the basic movement you can start working on rotations on the forward / backward and lateral movements, and finally work on jumps that involve the detachment of the entire foot from the mat, which remains the most intense and hard to handle.

This mode allows you to perform intense cardio work (usually the sessions do not exceed 30 minutes) by stimulating the body in an unprecedented way and, thanks to the effect of movement, the lymphatic system is also stimulated.

The second option is to use the carpet as a multipurpose tool on which you can perform squats, lunges, pushups, abdominals and many other free body exercises, taking advantage of the stimulation of a support base which, in addition to being unstable and yielding, also returns part of the energy applied to it, offering the unpublished body variants.

Here, too, you can work in time with the music or in a free way, always paying close attention to the execution technique.

The third mode is the most complete, but also the most difficult and tiring, as it involves training sessions (to the beat of music or not) in which movements of the cardio mode alternate with those of bodyweight toning, according to an alternation scheme, or blending them together creating short but very very intense workouts both from the cardiovascular than muscular.


It goes without saying that in this mode it is very easy to make mistakes or worse in injuries, especially when fatigue begins to appear; therefore my advice is to start with the first two distinct modes until you control them at best, then you can add short mixed circuits, extending their duration and complicating the sequence as you go along.

To conclude we can say that the trampoline (or rebounding) is a definitely valid tool, which can help improve some skills at certain times of the year, or as cardio variant instead of the usual mat or exercise bike.

The important thing, as always, is to understand that it is a tool like any other, but that it cannot work miracles, and that the difference is “how” it is used, and not “how much”.

add a comment of Trampoline (Rebounding) | How to use? Benefits?