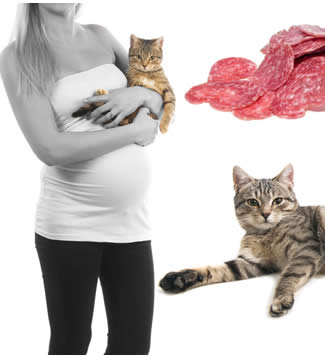 In immunosuppressed people, severe symptoms, such as seizures and difficulty in coordination, can occur.

If the infection occurs during pregnancy, the unborn child can contract the so-called congenital toxoplasmosis and remain severely (as well as irreversibly) compromised.
Diet and overall hygiene are the most important factors for the prevention of contagion. The disease is rarely spread by blood transfusions and cannot be spread otherwise.

The parasite only reproduces in cats; however, it can infect most warm-blooded animals, which is why its cysts can be found in various edible meats.
The diagnosis is made by blood analysis (referring to antibodies) or, in the pregnant woman, by verifying the presence of parasitic DNA in the amniotic fluid. In healthy people, no treatment is usually needed; during pregnancy, on the other hand, drugs such as spiramycin or pyrimethamine / sulfadiazine and folinic acid can be used.
Half of the world population (more in developing countries) is infected with Toxoplasma gondii and shows no symptoms; Unfortunately, around 200.000 cases of congenital toxoplasmosis are diagnosed each year.

A multi-center European case-control study concluded that the consumption of raw and undercooked meat is the main source of contagion in pregnancy, while contact with contaminated soil contributes to a much smaller rate of infections.


The first two are food and fecal-oral infections, which occur mainly in the following circumstances:

La diet to prevent toxoplasmosis it mainly affects pregnant women who, if infected, can transmit the parasite to the fetus, making it seriously ill.

Congenital toxoplasmosis contracted in the first weeks of gestation is associated with fetal death and abortion and, in survivors, is accompanied by neurological deficits, neurocognitive deficits and chorioretinitis.

If the mother has already contracted toxoplasmosis she is considered to be less at risk, as she already has the specific antibodies and should no longer become acutely ill.
In the event that the woman has never fallen ill with toxoplasmosis, the most important preventive dietary rules for dealing with a pregnancy are:

Precautions to reduce the possibility of contracting toxoplasmosis

Furthermore, Toxoplasma gondii can be eliminated from the diet by various methods:

The animals most affected by this contamination are: pork, lamb and game. Among the various types of livestock raised, the greatest rates of infection are: pigs, sheep, goats and chickens.

Cattle can be contaminated by the pathogen but their organism is able to heal completely (eliminating it with the faeces in a few weeks); flesh cysts are very rare. Horses, on the other hand, are generally considered resistant to infestation but this is not an irrefutable rule.
Although Toxoplasma gondii has the ability to infect virtually all warm-blooded animals, susceptibility and infection rates vary greatly between species, regarding habitat or breeding, diet, and many other factors.
In particular, hygienic conditions and farming techniques appear to have a major impact on the risk of contamination. For example, animals kept outdoors are more at risk of infection than those raised indoors or in partial confinement.
Thanks to the lack of exposure to the outside, even chickens raised in confinement are generally not infected with the parasite, while those free-range or raised in the open are much more susceptible to the disease; on the other hand, we also know that excessive confinement can cause other types of pathologies, such as bacterial and viral ones.
The meats to be consumed cooked represent the least risky foods compared to the others (especially birds). However, let's not forget that from certain animals (pigs and sheep, some of which belong to the game group) it is possible to obtain raw preserved preparations, such as: ham, culatello, speck, loin, pancetta, salami, sausage, etc.
Tissue cysts are rarely found in buffalo or beef, which is considered a low risk food for parasites.

The risk of contagion due to toxoplasmosis increases:

First of all, it is necessary to specify that, by itself, the presence of a domestic feline does NOT increase the risk of the disease. In fact, if the animal is a domestic type, while increasing the chances of contact, the chances of the cat getting sick decrease.
The rate of infection in cats varies greatly depending on the diet and lifestyle they lead. Wild ones that hunt for food are more likely to get infected than domesticated ones. The prevalence of Toxoplasma gondii in cats depends mainly on the availability of infected animals, such as small mammals (mice and rats) and birds, which are generally abundant in the area.
After contracting the disease, cats excrete the pathogen in their feces for several weeks. On excretion, these are generally not contagious for at least 24-48 hours, that is, until the cysts mature and become pathogenic; these can survive in the environment for over a year.


Other articles on 'Toxoplasmosis - Diet to Prevent It'