Chestnut is an atypical fruit by virtue of the content of complex carbohydrates which makes it more like cereals than other fruits.

Thanks to its qualities it is therefore indicated to replace the carbohydrate part of the meal. Until a few decades ago, chestnuts represented the food base of the mountain people so much so that the chestnut had earned the nickname of bread tree.

Generally, we consume them roasted or boiled; chestnuts, in reality, can have many different uses in the kitchen and can therefore be used in many recipes, from appetizers to desserts. From chestnuts a naturally gluten-free flour is obtained, also indicated for sweet and savory dishes.

Chestnuts are quite nutritious; contain predominantly acid folic and other Vitamins of group B, magnesium, calcium, phosphorus and potassium. If well done, they are very digestible and, thanks to the richness of dietary fiber, they help to preserve and restore normal bowel function.

They are useful in case of asthenia and represent a ideal food especially for children, the elderly and pregnant women.

How many calories do they contain? 100 grams of chestnuts provide just under 200 calories.

How to eat chestnuts

Chestnuts represent an anomalous fruit also for another reason: they must be eaten cooked. Sure, a nice packet of roasted chestnuts ready is a great way to pamper yourself, but we can also cook chestnuts at home, without too many problems.

To make roasted chestnuts at home we need the perforated pan and, preferably, one flame spreaders. After cutting the chestnuts with a knife or with the special tool, cook them for a few minutes over medium heat, until the surface is slightly toasted.

An alternative to the stove is to cook chestnuts in the oven at 200 degrees for about 15/20 minutes, according to the size of the fruit. Also in this case, before cooking the chestnuts it is necessary to engrave them. Be careful not to overcook them, otherwise they are hard. Once removed from the oven, they should be wrapped in a cloth and peeled as soon as possible (as soon as the temperature makes it possible to handle them without getting burned).

Boiled chestnuts in their skins

Rinse the chestnuts and put them in a large pot with cold water. Bring the water to a boil and let it go for at least 40 minutes. Cooking times actually vary by size chestnuts.

Peel the chestnuts by removing only the outermost peel. Put them in plenty of cold water with fennel seeds and a couple of bay leaves. Bring to a boil, cover and simmer.

Also in this case the cooking times depend on the size of the chestnuts, generally about 20/30 minutes are sufficient. Once cooked, let them cool and also deprive them of the second peel.

A recipe with chestnuts, how to make risotto

Have you ever prepared a risotto with chestnuts?

Preparation: prepare the vegetable broth, adding one or two mushrooms to the basic recipe. Boil the chestnuts for about 10 minutes after having deprived them of the outermost peel, let them cool, also deprive them of the second peel and cut them coarsely.

Fry a small onion in a little oil and toast the rice. Deglaze with a glass of white wine, add the chestnuts to the pan and cook by pouring a little boiling vegetable broth at a time. Season with salt, finish the dish with a pinch of pepper and serve. 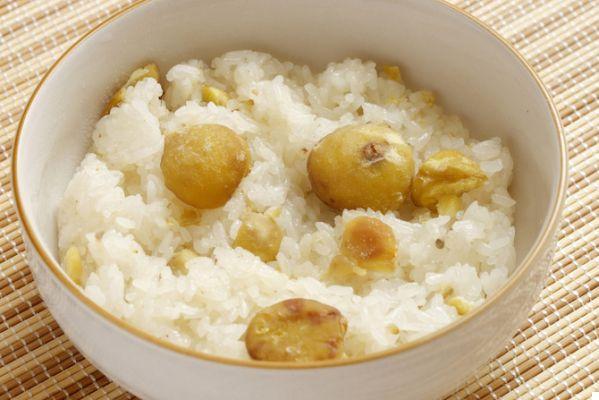 All the fruit and vegetables of October

> How to cook chestnuts

add a comment of Top fruit of October: chestnuts