To Do List: What it is for, How to do it 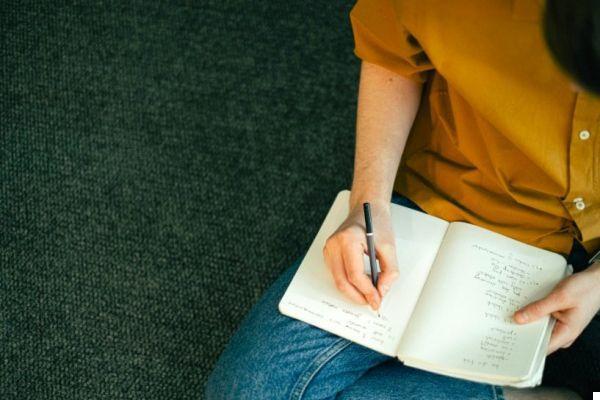 Do one to do list it should, in theory, be very simple.

In fact, it is sufficient to write on a sheet of paper, on an App, on a PC screen - no matter the medium on which you do it - a list of tasks (tasks or actions, depending on how you want to translate it) that you need or want to do .

In reality, however, the first few times when you try to use them, you often end up getting bad results, generating lists:

The result is that you do little or nothing with them, you demotivate them and stop using them shortly after starting them. And it's a shame, because the to do list is a simple and powerful productivity tool to get results in any area.

In this article I will tell you then:

If you follow me, you know how important it is in my opinion to have a map of your route.

To do these things, you have two important tools at your disposal:

The to do list serves, first of all, to do the right things and do them faster. Where by "right" I mean the important ones or those that you have chosen to do in any case.

Otherwise you risk finding yourself often busy with secondary things or that you have not really chosen to do, ultimately combining very little for yourself and your goals.

Secondly, the to do list reduces that anxiety more or less subtle that often pervades our lives when we feel besieged by a thousand things for which we have not found a time, a way, a place for them to be done.

In fact, the little monster of anxiety feeds and grows thanks to everything that remains vague and indeterminate.

So when you clarify, in writing:

Here, as if by magic, you will find serenity, enthusiasm and motivation.

There are probably 100 different ways to make a to-do list, but aside from the fact that everyone has their own preferences, there's certainly no time to explore them all.


Regardless of the way you choose, I suggest 3 basic rules that in my opinion not only always work, but are absolutely essential to make a good to do list.

Some tell you they have a single, huge to do list, on which to write down all the things you need to do.

This is a mistake.

To do lists of this type are in fact:

So much better to do not one, but several to do lists - in any case no more than 5 or 6 - each dedicated to a specific aspect of your life.


For example, I have one dedicated exclusively to work, one to family, one to the MyHealthyGrowth blog, one to a miscellany of minutiae ranging from paying the house bill to looking for a shirt that I can no longer find.

These are lists that are "always open", that is, from which I delete and continually add new tasks.

In addition to these general lists, when I dedicate myself to some specific project, for example putting on an important collaboration or delving into a certain topic, I make a to do list dedicated only to that, and then I close it at the end of the project.

You will see that just doing the exercise of dividing your tasks into multiple lists will be a fantastic way to put your life in order.

In fact, it allows you to:

Once you have, for each area of ​​your life, a list of things to do in the short / medium term, you have not yet solved the problem of knowing what will you do in the morning when you get up.

From each of the lists we saw in the previous point then, you have to take one or more activities every night to put on your list of things you will do the next day. 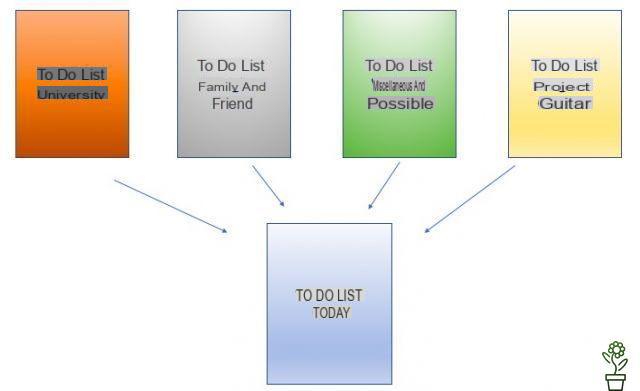 And, every night, you'll need to check this list off and give yourself feedback on what you've done.

In short, it is a question of using the same principle that I recommend in the 7-minute technique and in the Ivy Lee method: having a plan made up of small and feasible steps and checking every evening if you have followed it or not.

The daily list, unlike those of the previous point, it can also be only one, especially when the activities you enter are less than a dozen.

However, even in this case, nothing prevents you from making multiple daily lists. A matter of taste, I prefer to have a single one.

The difficult thing to do, however, is to choose which activity to include. To do this it is important to pay close attention to the next point.

I have seen to do lists so telegraphic that those who wrote them, after a short time, could not even remember well what the various activities were referring to.

And others so long-winded that they seem Napoleon's plans for the invasion of Russia.

Instead, you must seek the golden mean, condensing into a short sentence what do you have to do, for when, why, how long it will take you.

It is in these kinds of short descriptions that it stands the very essence of the usefulness of a to do list.

In fact, it is one thing to think generically that perhaps you should consult an ophthalmologist.

It is quite another thing to know, indeed, to have even decided that you have to call him .... sooner or later

Still completely different, finally, is to put in writing, in your general list dedicated to health, a phrase such as “call the ophthalmologist Pinco Pallo on Tuesday to make an appointment before September 10th. 5 minutes".

And then, on Monday evening, transfer the task in question to the to do list of the next day, perhaps even indicating the time in which you will do it.

The difference in the result is evident: as long as "calling the ophthalmologist" remains an indeterminate idea, probably you will not.

When, on the other hand, you have established exactly who to call, when to call and when you want the appointment, probably you will do it.

What not to put on a to do list

The mistake most often made when compiling a to do list is confusing tasks and actions with wishes and goals.

Therefore, absolutely avoid phrases like "Learn Spanish", "Prepare a marathon", "Graduate within the year": in fact, these are not actions that you can do in the course of a day, but long-term projects or goals.

What you can do, however, is to use the to do lists to unlock or advance these projects and goals.

For example, you may want to lose weight, and to do so you would need to start by going to a visit with the dietician, but a visit that you have been putting off for months.

Here then is what to write on your list “Call the dietician on Wednesday morning to make an appointment as soon as possible. 5 minutes ”will take you to stop procrastinating.

Do you want to learn to play the guitar? Write on your to do list “Inform me about online guitar courses by the weekend. Half an hour"

Do you want to change jobs? He begins to “Update my CV and Linkedin profile, Thursday evening. An hour and a half".

A to do list that works is made up of small, feasible, well-identified actions which can be carried out in a short period of time: from a few minutes to a day at the most.

A to do list can be made, theoretically, on any medium: from the diary on which you write by hand to the PC to the Apps on your smartphone to the voice recorder connected with a virtual assistant.

More than delving into the pros and cons of each system, especially since they are subjective, I'll tell you what I do and why.

As you will see, I don't use a single system, but several, depending on the list. To reiterate that the to do list, to be effective, it must always be adapted to the context and to the person.

When I write, I always keep some post-its near my PC on which I note ideas: among them, some will go to my diary, others in a to-do list, others will remain only on the post-it who knows until when.

For my personal life and my work, I have the general to do lists on excell sheets, while the daily one I write by hand - which I find more personal - on a moleskine diary. Not because it is more effective than other diaries, but for emotional reasons: it reminds me of when, as a kid, I used to read Chatwin's travel books.

Of the App, for my personal curiosity, I have tried several. I usually use them for specific projects that I open and after a while I have to close; I find myself so-so, because unfortunately I have never been very technological.

Todoist and Remember The Milk are probably the two most famous and best apps. I prefer the latter for a simple reason: I think it has a brilliant name.

It is no coincidence then that Todoist's motto is "free your mental space" and that of Remember the Milk is "get your commitments out of your head".

Both insist that, as we said in the introduction to the article, a to do list has great therapeutic power to get things out of your mind and leave it freer and lighter.

For this reason alone, you must definitely try to do it.

Sadness: really understand it to leave room for joy ❯