The Wish Tree: A short story shows us how we sabotage our life 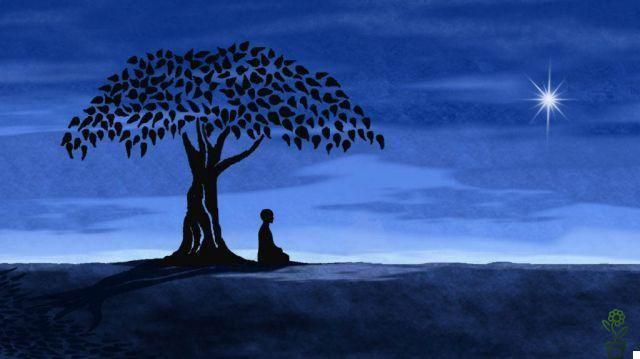 A man walked in a wood thinking about his worries, his many problems. Exhausted, he stopped to rest in the shade of a tree, but it was a magical tree that instantly granted all the wishes of anyone who touched it.

The man was thirsty, so he thought he would like to drink some fresh water. Immediately, a glass of cold water appeared in his hand. Surprised, he looked at the water and drank. Once his thirst was quenched, he realized he was hungry and wanted something to eat. Immediately a plate of good food appeared in front of him.

“If that's really the case, I want to have a nice home,” he said aloud.

The house appeared on the lawn in front of him. A huge smile crossed his face as he wished he had servants to take care of that wonderful house. When they appeared, he realized that he had somehow been blessed with incredible power and wished he had a beautiful, loving and intelligent woman with whom to share his fortune.

When the woman appeared before his eyes, the man said, “wait a minute, that's ridiculous. I have never been so lucky in my life. This can't happen to me! "

He had not finished saying those words that everything was already gone.

Resigned, the man said to himself: "I knew, something so wonderful could not happen to me." And he went away sad and with his head down, thinking about his many problems.

To many people, like the man in the story, wonderful things happen which then vanish as if by magic simply because they think they don't deserve them. This parable invites us to reflect on what we expect from life and believe we can achieve.

To get what you want, you must first believe that you deserve it

We tend to think that our world is built on facts. But facts are just one variable in a much more complex equation. We constantly interpret these facts, by doing so we give them meaning according to our conception of life and the image we have of ourselves. Then our certainties come into play, which were previously only presumptions.

A presumption involves assuming something for certain starting from some clues, to the point that it later turns into a certainty. When presumption becomes a certainty, it will eventually influence the way we interpret the events that happen to us. Like man in history, when we are sure we do not deserve something, sooner or later we will lose it.

When we believe we are not up to achieving certain objectives, a mechanism will be activated in us that will confirm that presumption, transforming it into certainty. So we start sabotaging ourselves, usually on a subconscious level.

This happens because we hate cognitive dissonance. That is to say, once we have formed an idea of ​​ourselves, everything that contradicts it or makes it vacillate turns into a cognitive dissonance. At this point, an alarm is activated within us in order to ensure that this "I" of ours remains stable. The problem is that sometimes this self-protection mechanism prevents us from growing and, as with man in history, prevents us from reaching the most ambitious goals.

Therefore, if we believe we do not deserve something, we will surely find a way to stop ourselves from achieving it. This mechanism can be found in the couple relationship, when we meet a person so perfect that we think it's too good to be true and we end up sabotaging the relationship, perhaps through jealousy or distrust. It can also happen at work, when we are offered such a good opportunity that it seems incredible to us so, by not giving it credit, the fear of making mistakes and insecurity end up making us lose it. Thus we close a vicious circle in which we end up repeating ourselves: "it was too good to be true!"

The point is that when we accept these changes, we also force ourselves to change our image of ourselves. And this is a complicated process that not everyone is willing to accept. Many prefer to remain in their comfort zone, complaining of their "bad luck", without realizing that many times it is they themselves who contribute to making events take a negative turn.

Feeling undeserving generates resistance to positive change. Thus we will condemn ourselves to a mediocre life in which only our negative prophecies are fulfilled.

Don't become your main limitation: How to break this vicious circle?

“We ignore our true height until we stand up,” Emily Dickinson said. It is interesting to note in this regard that generally the education we receive, the society and the people closest to us are precisely those who prefer us to remain seated. This makes it more comfortable for everyone.

Therefore, the first step in getting what you want is to get rid of the "certainties" that limit you. All those things that you take as absolute truths are actually presumptions whose origin can be traced back to your past. The feeling of falling short or feeling unworthy usually comes from experiences in childhood or adolescence. It is also likely that these "certainties" are words that your parents, teachers, or other important people in your life repeated to you.

With their words they have helped to shape the image you have of yourself. However, you must understand that a static "I" is a non-growing "I". Cognitive dissonance is not a bad thing to fear, it's actually a sign that you are thinking for yourself, are changing and evolving.

As you are working to forgive yourself these deeply ingrained thoughts that are holding you back and preventing you from achieving your dreams, you will find that you will begin to feel better, lighter and relieved. Little by little, you will prepare yourself to fully enjoy the good opportunities that present themselves to you in life, instead of sabotaging them and standing still and crying over spilled milk.

The Problem Tree: How to get rid of worries ❯

add a comment of The Wish Tree: A short story shows us how we sabotage our life