The wall ball | Which muscles does he train? how should it be done?

The wall ball it is a typical exercise of functional training that consists of throwing a medicine ball against a wall (precisely wall) at a certain height, typically 3 meters.

This exercise is highly conditioning and can be included in all workouts where a general conditioning of the athlete is sought.

Although it is apparently simple to see, the wall ball needs some prerequisites such as the mechanics of the squat, that of the press and a minimum of perception of the ball while grasping it (it seems trivial but many people are not able to grab a volley ball if a normal volleyball is thrown at them, let alone a medicine ball aiming at their head).

In itself, therefore, the wall ball is a simple exercise, but to be proposed to novices it needs some preparatory skills.

By itself the wall ball consists of a squat and a press, with consequent throwing of the ball towards the wall and re-grasping it.

Before trying our hand at teaching itself, let's take a small step back on the type of medicine ball to use: theoretically the ball best suited to this exercise is la so-called "giant medball"Or the giant medicine ball.

It has a diameter that exceeds 35 cm and allows a wider and more comfortable grip than the classic medicine ball for this type of exercise. It is also made of a material that is not too elastic, which prevents it from excessive bounce after impact with the wall.

Among other types of medball that can be found in gyms is the classic rubber medicine ball, made of a hollow rubber casing, suitable as overload but not designed for dynamic exercises as it bounces a lot and cracks easily.

Otherwise we can find the famous "slam ball" also known as "no bounce ball", excellent for exercises where no bounce is required, such as the rushes of the ball on the ground, but not suitable for example for the wall ball as it just hits the wall falls to the ground without detaching from it.

Having said that, the giant ball will preferably accompany our wall balls. 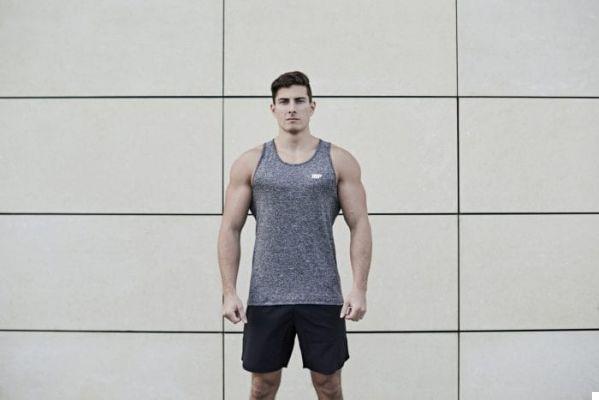 1. Position yourself with a giant ball in front of a wall; the distance must be sufficient to be able to perform the movement (therefore not too short), but without exceeding as you would perform a press movement too leaning forward to be able to hit the wall, and concomitantly there would be a risk that the rebound would not is sufficient to reach the athlete again, who would find himself catching the ball in the wrong position. Typically a trial distance to start is about 40-50cm from the wall.

2. Depart from standing station with feet shoulder-width apart and the ball resting on the chest.

3. Perform a squat under the parallel, keeping the ball resting on the chest, the physiological curves correct, the heels close to the ground and the elbows tight so that they stay inside the knees.

4. In the ascent phase, push with the lower limbs until the hip is completely distended.

5. Throwing of the ball (press phase) which occurs immediately in succession to the distension of the hip using all the thrust from the ground. The launch height is usually 3 meters, and can be marked with a line of tape on the wall, or by drawing a target with paint.


6. Grasping the ball, which must take place with the palms facing the ball and the arms extended towards the wall, with the hips extended, with the abdomen contracted, bringing the ball back to the chest and thus resuming the starting position.

7. Perform the repetitions required by the workout.

That said there are some mistakes to avoid, which are partly inherent in squat mechanics and partly not.

• Lose the curves of the column in the squat phase.
• Lift your heels off the floor during squatting.
• Bring the elbows outside of the knees, forcing us to contract the chest to keep the ball in place, which is not the focus of the exercise.
• Position yourself at the wrong distance from the wall.
• Perform the exercise with an unsuitable tool for the purpose.
• Begin the descent phase before receiving the ball.

Typically, the muscles that are most involved in this exercise are:

In addition to working muscularly, the cardio compartment is put to the test: since the load is not very high to allow us to throw the ball, you have to play on a high number of repetitions, which if performed continuously and will increase the heart rate in short while!!

A ball, a wall… seeing is believing.

Audio Video The wall ball | Which muscles does he train? how should it be done?
The Best Foods For Pre-Workout ❯

add a comment of The wall ball | Which muscles does he train? how should it be done?