The various types of soy sauce 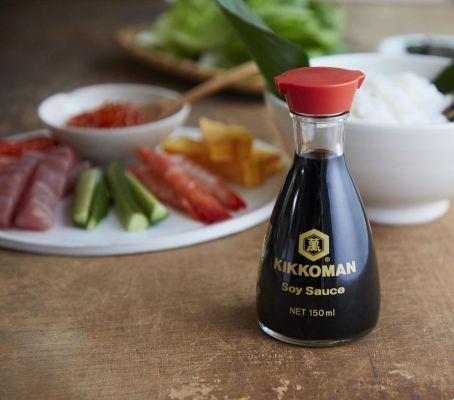 Knowing the various types of soy sauce also helps us to understand if we are using the one we have at home or the one we are buying in the most correct way.. Soy sauce is a very popular condiment around the world and is of Chinese origin, as are the various uses of fermented soy products.

The fermentation of soy is an art that has refined over the centuries, which involves the use of the pasta of this legume, seeds of some cereals and brine.

It goes without saying that many different types of soy sauce have been produced over the centuries, different for fermentation methods and times but also for the addition of particular and regional ingredients.

In fact, despite being born in China, soy sauce has taken root, under various names, in other parts of the world: from Hawaii to the Philippines, from Myanmar to Japan, from the two Koreas to Malaysia.

Not being able to list and describe all these varieties, we will just create a list of 7 types of soy sauce, the most common, in order to have a basic smattering to be able to move correctly in the purchase and use:

It is the lightest, totally liquid. It is used to season light fries, for most marinades, in soups, or as a dressing on salads, instead of vinegar or lemon juice.

It is the most used in the West, often considered as the soy sauce par excellence. Although it is the lightest, it is the saltiest, as it is rich in sodium.

Read also Yellow soy, benefits and how to use it >>

The name says it all: it is much darker than light soy sauce and often denser. The richer, more caramelized flavor is given by a longer aging. It is generally used on cold or lukewarm main courses, not hot or boiling ones.

Sometimes in the aging process dried mushrooms are added, often typical Chinese varieties. Perfectly replaces dark soy sauce but offers a less caramelized flavor and, of course, very similar to that of mushrooms, sometimes referred to as earthy or moist flavor. Ideal with chicken dishes.

Much more similar to a syrup than the light soy sauce we are used to, this sauce has a greater density due to theadded sugar and a higher percentage of cereals during fermentation. It goes without saying that this entails a markedly sweeter flavor than normal, which makes it ideal in all variations of fried rice.

Very common in Indochina, much less in the West. It is a created soy sauce using a brine that not only involves the addition of salt, but also of shrimp powder, an ingredient found almost exclusively in oriental markets.

The consistency is very similar to that of light soy sauce, and therefore it is suitable to replace it, although it brings the typical taste of the sea much loved in the Far East.

In addition to Indonesia, it is also found in the Netherlands. It is a thick soy sauce variety that involves the addition of specific spices, as star anise, garlic powder, etc.. Various recipes provide it both as a final condiment and during the cooking of dishes. Generally it is associated with fried rice and pork.

It is the sauce of Japanese soy, one of the best known. It generally does not involve the use of cereals in its preparation, which makes the sauce tamari ideal in case of celiac disease. But it's always good check the label, as cereals are sometimes added for western markets. It has a mild and moderate flavor, which is expressed in the so-called umami.

Audio Video The various types of soy sauce
Baobab, the natural supplement for the intestine ❯

add a comment of The various types of soy sauce