The "secret" diet of Lenny Kravitz, in amazing shape at 56 years old

At the age of 56, successful rock singer-songwriter Lenny Kravitz sports an exceptional physique that, appearing in all its glory on Men's Health, literally drove his fans crazy. What's the secret? He unveiled it during the interview with the American monthly.

Women all over the world in these hours are feasting their eyes at the sculpted physique of Lenny Kravitz, immortalized in all his incredible perfection on the island of Eleuthera in the archipelago of the Bahamas where the singer moved in March, to the the beginning of the pandemic and then it was waiting for better times.

To the journalist Alex Pappademas who reached him in this exotic paradise (his mother's place of origin) Lenny revealed some of the good habits he follows to keep himself as we see him: in excellent health and splendid shape, showing many years less than those which are written on the documents (he turned 56 in May).

Entering us, at least for a moment, in the green of the Bahamas we find him grappling with his daily life on the island, spent with particular attention to thephysical activity and healthy eating. To keep him company the two dogs "foundlings" Leroy and Jojo, both adopted directly from the street.

We see Lenny, shirtless and barefoot, changing a tire on an old Volkswagen Bug or playing guitar in front of a calm blue ocean or bringing home his banana crop in two baskets.

In a video the musician also shows the content of his refrigerator full of fruit and vegetables, while on the floor of his kitchen stands out a large amount of seeds, nuts, cashews, dried mangoes and many other 100% vegetable delicacies.

The choice of Lenny Kravitz is therefore oriented towards veganism, mainly raw food. He told the American monthly that, especially in summer, when his garden is richer in vegetables, he eats mainly raw food. Obviously associates this with a good workout:

"I don't eat sugar except fruit, I am very careful about what I put in my body, I always keep it trained because I want to be free to do what I want, expressing myself at my best also as a musician".

You can see the results for yourself in the photos and videos!


Back to the earth #earthday #farming #vegan #organic #nongmo #letloverule 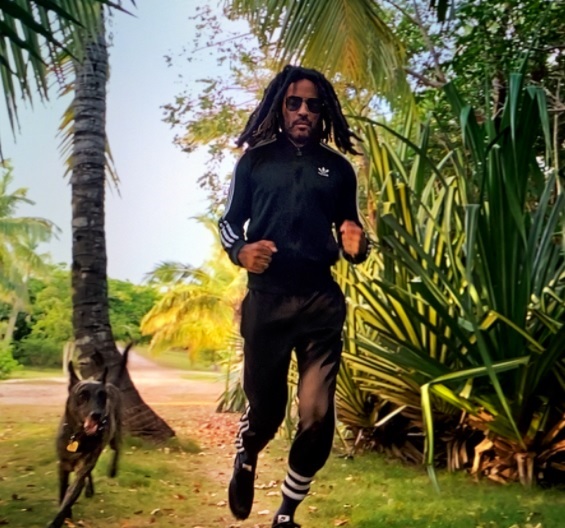 There is no doubt that apart from the slightly grizzled beard, he looks at least 20 years younger! And he could only deserve the cover of the new Men's Health.


Cover of @menshealthmag November 2020. Read the full story at link in bio. 📸: @markseliger

Audio Video The "secret" diet of Lenny Kravitz, in amazing shape at 56 years old
Is the vegan diet the cheapest? ❯

add a comment of The "secret" diet of Lenny Kravitz, in amazing shape at 56 years old