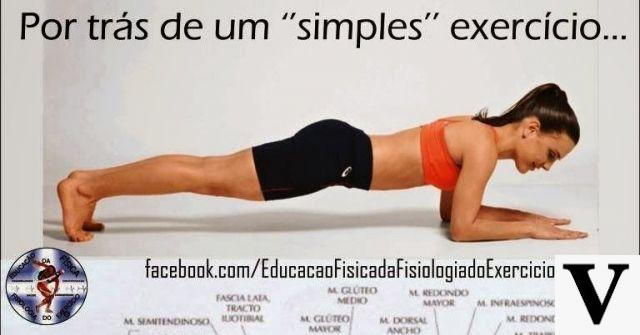 By the healthiergang writer , fitness instructor and Powerlifting expert

Does the plank exercise make you lose weight?

The standard version of this exercise is performed in the prone position, with the forearms and the toes representing the only support with the ground, while the rest of the body remains in suspension. In this position, all internal organs in the abdomen tend to "push down". The only muscle that has the function of keeping them in their natural position is the transverse abdominis.

The Transversus of the Abdomen

The transverse abdominal muscle is the one placed more internally than all the other abdominal muscles (rectus abdominis and external-internal oblique) and has muscle fibers that run horizontally. It originates from the last six ribs, from the lumbosacral fascia, from the iliac crest, from the iliac spine and from the inguinal ligament. It is inserted on the upper part of the linea alba, in the inner part of the last six ribs, on the pubis and on the pectine crest.

Occupying the entire internal central band of the abdominal wall, this muscle acts as a natural containment belt, much more than the rectum and the obliques that are more on the surface and which instead have the function of producing movement of the trunk (flexion, rotation and inclination ).


Its main function, as I explained previously, is to contain, as this muscle with its contraction generates the necessary intra-abdominal pressure necessary to stabilize the spine during intense efforts. In addition, it plays a role in maintaining correct posture and participates in breathing, lowering the ribs during the exhalation phase.

Many women who return to the gym after giving birth are prescribed a multitude of crunches. This exercise, however, is not the best choice in this case, since the pelvic floor after the trauma of the perineal area due to childbirth, even more so if an episiotomy has been performed, can undergo bladder, vaginal and rectal prolapses.

The crunch, in this case, contributes to worsening the situation because the continuous shortening and lengthening of the rectus abdominis does nothing but put additional pressure on the perineal area.

In this case, the strengthening of the transverse abdomen is of fundamental importance and the only exercise that allows you to train it properly, thus restoring the integrity of the pelvic floor is the plank.

How to train the plank

Does the plank exercise make you lose weight? As I wrote in the introduction to the article, the plank is performed in the prone position (face facing the ground), with the forearms and toes acting as pivots and the rest of the body remaining in suspension.


The plank is an isometric exercise. For this reason, since there is no way to count the repetitions (since I remind you that the isometric muscle contraction does not require movement), the plank must be performed in time. The more you manage to maintain the correct position, the more effective the exercise becomes. However, if you manage to maintain the position for more than sixty seconds without too much difficulty, the intensity of the exercise must be increased by placing a resistance (the use of a disc is the best choice) on the sacral area.

I would like to point out that the resistance must be placed directly on the sacrum and not on the lumbar area which otherwise would tend to hyper-extend in an irregular way, with the possibility of incurring damage to the spine.

Whether you work with resistance or not, the important thing is to better organize the amount of work to be done with this exercise. For those who are approaching the plank for the first time, even if they are subjects who have been training for some time, I recommend starting with 3-4 sets of 30 seconds of holds, interspersed with 1 minute recoveries.

In the next step, once the 3-4 sets of 30 seconds become too light, the time under tension can be increased up to 45-60 seconds, again for the same number of sets.

At this point, adapting also to this level of difficulty, it is necessary to continue adding a resistance in the manner discussed above. I recommend starting with 5kg for 3-4 sets of 30 seconds and then using the same progression I described, increasing the load each time you can complete 3-4 sets of 45-60 seconds with optimal posture.

The side plank is a variation of this exercise that is performed in the lateral decubitus position, with the outside of the foot and the forearm acting as pivots and the rest of the body (which in this case is on the side) in suspension. It is more complicated than the classic version because all the weight of the body rests on one side only.

To increase the difficulty, in this case, resistance must be created by holding a kettlebell or a dumbbell with the arm opposite to the one anchored to the ground, trying to keep the elbow locked in distension and to form a right angle with the trunk. I recommend starting to perform this variant only after the classic version of the plank described above has been learned and mastered in the best way.

Audio Video The plank exercise makes you lose weight | The Exercise To Train The Core
LISS (Low Intensity Steady State) | What is that? The Things To Know ❯