The personality and its dark areas 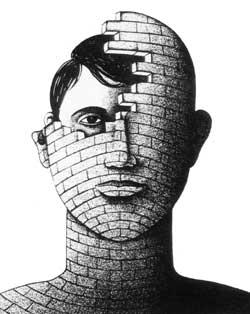 Are you an independent person? Classical Social Psychology suggests to us that most people would not be able to answer this question with absolute certainty.

Why do people ignore some aspects of their personality? Let's take a very simple example of everyday life: we know people who infuriate us because they almost always arrive late for their appointments. When someone asks them why for this they offer various excuses, but we know well that it is their peculiarity, they generally arrive late for all the appointments; we could thus say that arriving late is part of their personality. But ... do these people really not realize their peculiarity? Taking up a popular saying it could be said that: “in the Lord's vineyard there is everything”, and so there are people who simply lie while others do not pay attention to their delay because it is not very significant to them. To explain these last cases in Psychology there is a proposal: the Patterns of the Self by Markus. This theory states that each of us is developing a series of patterns (cognitive generalizations) over a lifetime, which function (more or less) as maps of our personality. These maps, as real travel guides, help us to understand our feelings, thoughts and ways of behaving. However, these maps would not be entirely accurate, there are darker areas that offer the person very little knowledge of themselves. These aspects of the Theory of the Shemi of the Self they were studied way back in 1977. Professor Markus examined those areas of the self pattern related to our dependence or independence. The study was developed with 48 women who were asked to fill in a questionnaire in which they should have self-assessed in relation to certain generally dichotomous characteristics such as: individualists, conformists, leaders or followers ... Starting from the people's answers, they were separated into three groups : independent, dependent and a third group (without pattern), formed by those women who did not show a well-defined pattern. Researchers later observed that there were people who apparently did not notice or were not interested in their independence while others cared a lot about it. But one thing is the words and another the other facts, so there was still a question to be clarified: were the people who decided to be independent, dependent or who were simply not interested in these concepts consistent with their behavior? To answer this question, the researchers invited people back to the lab a few weeks later. This time the test was different: on a screen appeared words related to independence, dependence or words without any relationship to these concepts. People had to choose the ones that most related to their peculiarities. It was assumed that people who intended to be independent had to react more quickly to words related to the concept of independence and at the same time had to choose more of these words. The same should have happened with addicts. Then people had to identify in a list which behaviors were closest to their daily life. As might be hoped, independent people recognized more independent behaviors; the addicted people recognized a greater number of addictive behaviors and… what happened with the people in the group without a pattern? These women moved from highly addictive to independent behavior. These results indicate that the pattern of the self facilitates the processing of our self-representation, helps us to understand who we are and why we act in a certain way, however, not all have the same parameters to conform our patterns of the self, it all depends on the importance we give to some concepts over others. In this way, if we consider that punctuality or independence are important concepts, we will worry about creating habits that express them and so we will create a mental scheme around these qualities that will allow us to realize if we are more or less punctual people or more or less independent. When some qualities or characteristics are not particularly important to us, our self patterns built around them will turn out to be very poor, this is reflected in a dark area of ​​our personality. For this reason, there are occasions in which it is particularly difficult for us to define who we are or simply to realize how we behave. To give you an example of how to discover these dark areas, I recall a group technique that was of great impact to me when I first performed it while studying at university. In this technique, each person lists his four or five main characteristics on a sheet of paper; that is to say, those personality traits that she thinks make her different from others. Then each person places a white sheet on his back and each member of the group writes on the sheet an essential characteristic which, according to his criterion, defines the person.

add a comment of The personality and its dark areas