The Man Who Lost His Direction: 5 Life Lessons From An Ancient Norse Legend 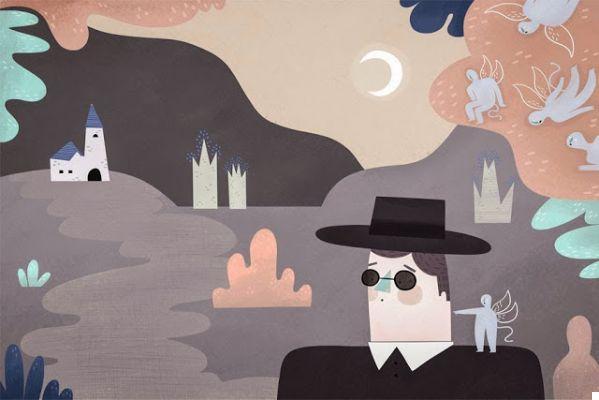 Many years ago, a man left his hometown to be reunited with his betrothed. They would get married as soon as he arrived at her. During the journey, the man thought that he had better take a different direction from the one he usually followed to go to his girlfriend's house. So he decided to take a new path, one that was more stimulating and promised new adventures.

Gradually, his footsteps carried him very far. He went through several villages and met many people. Each time he discovered new and more interesting things that encouraged him to move forward, without looking back.

In this way he spent many years traveling following a path that actually led him nowhere. Until one day he felt tired and the adventures stopped having the taste of novelty. Seeing new faces every day confused him and he missed the warmth of a home. So he decided to return.

However, when he returned he noticed that his fiancée had married another. After so many years without knowing anything about him she had given him up for dead.

The man, now old and poor, felt alone, cursing that day when he decided to change direction.

It is an old legend that can have different interpretations, but it also allows us to reflect on how important it is not to lose direction in life and not to be tempted by the distractions that arise.

What does this legend teach us?

1. That it is essential to determine what we want and focus on it

Often in life we ​​get carried away by circumstances, we act out of inertia and let the situation or others decide for us. However, in this way, one day we will wake up and realize that we have not fulfilled our dreams or that we are living a life that is not what we want. So, if you want to achieve something important, you should set goals, clearly identify them and, above all, be willing to fight to achieve them. Always keep in mind this sentence of Seneca: "For those who do not know which port to go to, no wind is favorable".


2. If we don't ignore the distractions we won't get anywhere

Sometimes we start the work day with a specific goal in mind, but when evening comes, we realize that we have not achieved it. We have been too busy with other, much less important activities. In life, these distracting elements multiply. So, if we are not careful, they will set us off the chosen path, they will make us forget our goals and when we want to go back it may be too late. Therefore, it is essential to know our priorities and establish a hierarchy among them. Find out what distracting elements might separate you from the path and have a plan ready to counter them. Remember that it is not enough to know what you want, but it is also important to know what you do not want to do.

3. Only the most authentic passions have the strength to keep us on the path

Sometimes our mind plays tricks on us. For example, the man in the story may not have been sufficiently in love with his fiancée enough to rush to get married and has therefore decided to follow a longer path. Sometimes procrastination is a message from our unconscious that indicates that we are not enjoying the chosen path or that in reality this goal is not as important as we think. For this reason, before setting yourself a goal that can take years of sacrifice, it's important to make sure you're motivated enough to stay focused along the way. Only the passions that arise from our deepest "I" can turn into the engine that drives our behavior and gives us happiness.

4. Every decision has its consequences

No one is an island in itself. Our decisions always impact those close to us, such as our parents, spouse, children or friends. The man in the story, for example, failed to consider the impact of his decision on his fiancée. And while it's sad to admit, sometimes we behave like that man, make decisions, and expect others to conform to them without realizing the influence our choices have on them. Therefore, before making an important decision it is essential to evaluate the impact of this on the people we love. Ask yourself: Do I really need to ask him for this sacrifice? Is there another possibility that would harm the people close to us less?


5. Goals also have a deadline

John L. Mason said, "Ideas have an expiration date, so we must act before that date." This American inventor was referring to the fact that it is important to act quickly, to seize the opportunity, due to the favorable conditions we have today but which may change tomorrow. Postponing decisions, perhaps out of fear or waiting for greater certainty, can cause us to miss an opportunity that won't come up again. Therefore, while some projects may excite us, you should ask yourself: How much happiness are you missing out on by delaying the decision? What are the dreams that you are neglecting for having chosen a different path? Is it really worth it?

Mother and daughter: The bond that unites can also destroy ❯

add a comment of The Man Who Lost His Direction: 5 Life Lessons From An Ancient Norse Legend