The little house: A story to see the world with new eyes 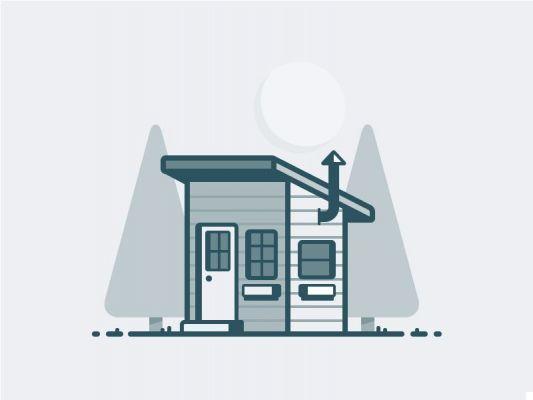 A man, overwhelmed by the predicament he was living in, went to a rabbi for advice.

- Rabbi, my house is very small. I live with my wife, my children and my in-laws in one room, one on top of the other. We spend the day shouting at each other. I don't know what to do - he said desperately.

The rabbi asked him if he had a cow. The man said yes, so he advised him to put this inside the house too. The man was puzzled by the rabbi's advice but followed it to the letter, so a week later he returned complaining that living together was much more unpleasant than before.

"Put your two goats in the house too," the rabbi advised him.

Once again, the man followed the advice, but returned again explaining that the situation had worsened. The rabbi asked him what other animals he had. When the man replied that he only had a dog and a few chickens, the rabbi told him to put them all in the house and to come back the following week.

Bewildered, the man returned home and followed the rabbi's advice but this time, when he returned, he was beside himself.

- This is unbearable! I have to do something or I'll go crazy. Please help me!

- Listen carefully: take the cow and take it to the barn, take the goats to the pen, leave the dog out of the house and take the chickens back to the hen house and after a few days come back to see me again. When he returned, the man was elated.

- Ah, rabbi! Now there is much more space at home, there is just me, my wife, my children and my in-laws. What an improvement!

There are situations that are difficult to tolerate, there is no doubt. But most of the time, we are the ones who lose perspective and add more pressure to a reality that isn't as bad as we draw it. Sometimes, we need things to get worse to value what we have, as happened to the man in history. The problem is, it's not always possible to go back.

Hedonistic adaptation, or because we don't value what we have

Adaptation is a mechanism that allows us to survive even in the most adverse conditions. As our environment changes, we implement a variety of resources that allow us to adapt to new circumstances. This is why we manage to overcome the death of a loved one or a major loss.

However, we also adapt to positive events. We adapt to situations that give pleasure and joy, to the point that we stop valuing them and they stop satisfying us. It is what is known as a hedonistic adaptation. With the passage of time, the joy and excitement that some situations aroused disappear, lose their novelty and we begin to take them for granted.

The problem with hedonistic adaptation is that, if we are not careful, we fall into an endless vicious circle of unmet needs because we want more and more. As soon as we reach one goal, it will seem insufficient and we enjoy very little of what we have achieved because we are already thinking about the next goal. In fact, Napoleon Bonaparte said that: "ambition never stops, not even at the height of greatness".

This is why many people don't feel satisfied, even though they apparently have everything they need to be happy.

Gratitude as a means to achieve happiness

In the story, the circumstances in which the man lived did not change, what changed radically was his way of seeing reality. This does not mean resigning and leading a bitter life, nor does it mean giving up our dreams. It just means being able to see the bright side of the situation we're in and feel gratitude.

For centuries, Buddhism has told us that gratitude is the key to happiness and inner peace. Now several psychological experiments have shown this. Psychologists at the University of California and Miami, for example, recruited 192 people and divided them into three groups: some were asked to describe the things they had felt grateful for all week, others had to describe the things they had. they annoyed and others simply had to keep a diary of the positive and negative events that had happened to them.


After 10 weeks, those who wrote about gratitude not only reported feeling happier, but also said they were more optimistic and satisfied with their lives. As if that weren't enough, they went to the doctor less than the rest.

The power of gratitude lies in the fact that it makes sure that what we have is enough. Instead of focusing on what we lack and seeing only the negative, we learn to focus on the positive side by valuing much more of what we have. Although we are aware that there is room for improvement, we are able to see life from a more positive perspective which helps us to tolerate better what bothers us.

This change of perspective does not lead to stagnation but allows us to live better the life we ​​have, until we can make the changes we want. This means pursuing your goals but not mortgaging your life on them and, above all, not letting your happiness depend on an uncertain future.

Laziness: The worst enemy of a full life ❯

add a comment of The little house: A story to see the world with new eyes