The lies and their meaning 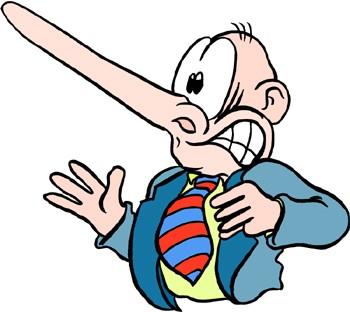 On one occasion
Mark Twain stated, “Everyone lies… every
day, every hour, awake, asleep, in their dreams and in their joy ”.
Perhaps this sentence will be a little exaggerated but there are many studies
scientific tests that confirm it.

An example is given
from the experiment carried out in 2002 by researchers from the University of
Massachussetts. In this case, the people they conversed with were asked
a complete stranger and, without their knowing it, the conversation would come
registered. They were then asked to analyze the recording and
indicassero the lies they had
said. It was found that 60% of these lied about every 10 minutes in duration
of the conversation. Men and women lied with the same frequency. Because
did they do it? Essentially for two reasons: to make the other feel better
perosna and to give a better image of themselves. Another study
developed by the University of East Carolina in 1993, showed that 92%
of the participants acknowledged having lied to their former partner. Which it was
the most common lie? Men used to lie about the number of relationships
had previously while women on the contrary used to lie "reducing" the
number of previous sexual experiences. The part
Interestingly, these two studies are based on lies in the
stricter sense, this in declaring false things. But in everyone's life
days, we ALL tell lies in the most diverse forms; by omission (we avoid
saying things we think might hurt others or cause us harm) or
we exaggerate on some events to make them more interesting or for
attract the attention of others. Not to mention all those extraverbal expressions
(gestures) that we pretend ... (smiles of circumstance, conventional gestures of
ok) Why we do
this? For a very reason
simple: because it works! One of the theories
most interesting that attempt to explain the tendency to lie is the intelligence hypothesis
Machiavellian. This theory holds that the progressive development of intelligence
in the animal world it is due to the need to develop more sophisticated forms
of deception and manipulation. This hypothesis also applies to humans,
stating that social complexity has pushed them to improve more and more i
mechanisms to deceive, making him develop superior negotiating skills
to persuade. This would mean that we are "born liars". Even if I don't
I am part of the Machiavellian theory of intelligence, I must admit
that the social environment plays an important role in the development of ours
lying side. For example, even though educators say the
child not to tell lies since this is bad behavior, however
They immediately begin to teach the little one several subtle deception tactics
they will need them to fit properly into society. A very example
simple is when you tell the child that "it is not okay" to express directly
contempt for a gift received so as not to offend the person who has us
made the gift. Actually the child sincerely expresses his emotions, but
very soon it will be conditioned by the thinking of adults learning to establish
when he will be able to express his ideas and when not. The little one will thus learn that
a lie sometimes makes others happier and will help make him
is better accepted. Then the game begins! There are several
scientific studies showing that people who lie tend to get
better jobs and more successful with sex people
opposite to. In fact, a few years ago Friedmann proved that more teenagers
popular in his school are also those who know how to manipulate and deceive
their peers more easily. In summary, good
part of the lies we tell every day are an attempt to fit in
better in the social environment in which we move. But let's not lie
only to others, but also to ourselves. Because? The answer can come from a
curious study carried out by the University of Winsconsin in 1981, in which yes
it has been found that the people who lie to themselves most frequently are
happier than those who have a more realistic perspective on the world. In this case i
researchers asked the participants in the experiment to try to win in
some gambling games. However, the actual results were manipulated,
increasing or decreasing your winnings. Healthy people tended to brag when
the winnings were high while they tended to criticize them when they were too much
scarce. In Diderot's words: “We swallow
of a sip the lie that makes us feel good and we drink it drop by drop
truth that makes us bitter ". Surprisingly,
people with a tendency to depression rated theirs more carefully
performance in the game, realizing the increase or decrease of
results. This study, which was later replicated in several other forms,
produced the theory that self-deception (in small doses and in
irrelevant situations) helps us to maintain a good mood. In conclusion,
we lie to ourselves to save our ego. However, too
understanding the meaning of lies and the role they play in life
intimate and in social relationships, they are among those who bet on the truth.
The fact that we have always behaved in a certain certain way does not
it means that there is no chance to change and start being more
direct, simple and honest with ourselves and with others.
Good habits: how long they take to consolidate ❯

add a comment of The lies and their meaning