The legend of the red thread 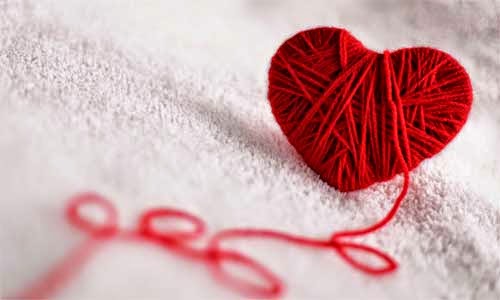 One evening, on his way home, a child met an elderly man in
feet under the moonlight. The man told the boy that he was tied to his future
wife gave a red thread, and pointed out the woman to whom he was destined. The child, who was not at all interested in knowing his "future" bride,
threw a stone at the little girl and fled. Years later, the boy had turned into a young man and his parents
they took care to organize his wedding, looking for the ideal wife for
him, as was the custom at the time in that culture. Found the partner and concluded
the wedding, the first wedding night the wife was joined by her husband
in her room, the young woman had her face covered with a veil. By removing
the veil the young man saw the beauty of his wife for the first time and remained
amazed, but he also noticed an ornament that the girl wore on
eyebrow. Then the boy asked his wife what the ornament was hiding, and she told him that as a child, one night with a full moon, she met a boy
who threw a stone at him causing him a wound that had left him a bad one
scar. The ornament was used to cover the mark of that night.The young man did not know that that night of his childhood, the old man from him
met was none other than Yue Xia Lao, a man who, according to legend
popular, he lives on the moon and every night he goes out to look for those who are among the souls
they are predestined. He later ties them with a thin red thread so they don't
can no longer be lost.This Chinese legend, of which there are several versions, is known
also in Japan and talks about the invisible threads that bind us to other people,
threads that can become tangled or stretched, but never break.

“They say that throughout our life we ​​have two great loves: one is
the one with whom you marry and live forever, and who perhaps will be the father or the
mother of our children ... That person with whom you have the greatest interpenetration
and you want to spend the rest of your life ... And they say that there is a second great love, a person that we will always lose.
Someone to whom we are linked from birth, so linked that strength
of chemistry, escaping reason will always prevent him from having a happy one
end. Until one day, they both stop trying ... They give up, and
they start looking for the other person they will eventually find. But I assure you it won't go a single night without needing another kiss from her,
or at least to argue one more time… Everyone knows what I'm talking about, because as they read, they came in
mind his name. They will get rid of him or her, they will stop suffering, they will be able to find
peace (they will calmly replace it), but not a day will go by without their desire
be at their side to disturb them. Because, sometimes, more energy is released by arguing with someone you love,
rather than making love with someone you appreciate ”.

The red thread: Destiny or a memory of the past?

In fact, the most interesting side of this legend is that we all have
several red threads to follow and many decisions to make, especially if
we want to advance in life. Some of these decisions are really painful,
but necessary, others are errors, pure and simple. Therefore, in our relationships we must always find a balance. It's a lot
harmful to be carried away only by the heart as it is to follow only the
reason. Special people are not only special for who they are, but also
for the relationship we have established with them, for the memories we have
built together and of course by the time they entered the
our life.This combination of factors creates a unique and unrepeatable relationship. Therefore,
it will always be part of our memory, and the red thread will not break. However,
this does not mean that we should stick to the past by thinking about it
continuously. Instead, at this point it is important to learn to remember, without
pain, without resentment and without nostalgia.We are all linked by invisible threads to the important people of ours
past, but that shouldn't stop us from living in the present. Those threads
reds do not have to turn into heavy burdens but rather into bridges than us
they connect to what we have been. We can't forget the people who
we love, but we can learn to live with it without implying a burden
for our present. The red thread must not limit our future,
rather it must become a nice reminder of our past.
Audio Video The legend of the red thread
Lack of Sleep: How It Affects the Brain ❯

add a comment of The legend of the red thread