During the Easter holidays, it is traditional to carry out spring cleaning, often during these reorganization of our homes, objects that we had forgotten about and that in his time had been so useful and fun ...
From the training box it is time to pull out a whole series of exercises that have been forgotten and have been done most of the times because they are tremendously tiring and adjective that the frequenters of the weight rooms seem to have forgotten !!!
It may be that body building is no longer in fashion and that people have given themselves to the most peaceful fitness, but if in the end you want to get results, a lot or a little effort you have to do it. And here then from the oblivion reappear the deadlift and the turn to the chest. The deadlift is a fundamental and extremely tiring exercise, but at the same time it is a movement that we all do and I would dare to say in many situations in life. A housewife knows how to lift a heavy object off the ground. The deadlift is often branded as a very dangerous exercise for the spine and consequently forgotten. The possible injuries that can occur during the execution of the deadlift are due to the use of too high loads or to incorrect execution of the exercise, which will affect the muscle-joint system. Exercises of considerable intensity, and which provides the body with a noticeable anabolic boost, and at the same time exercise not so dangerous if performed with the right technique.

Let's go now to see how the deadlift must be performed.

THE REMOVAL FROM THE GROUND

Feet should be shoulder-width apart or a little closer. The best way to determine your ideal foot position is to close your eyes and imagine you are about to take a large jump. You will see that the feet will be quite close to shoulder width and that the toes will be straight. The recommended grip is the same as for feet close to shoulder width. The most commonly used grip is the matching or mixed thumb grip, especially effective with maximal loads. This grip is sometimes not recommended as it could affect the symmetry of movement and muscular interventions as the upper limbs are one in pronation and the other in supination, a problem that can be solved by alternating between series and series. It can be very advantageous to use special hooks thanks to which a large part of the weight is transferred directly to the wrists, relieving the tension on the fingers of the hands thus giving stability to the grip and the possibility of using good loads. Once the feet have been positioned, the front of the legs will touch the rod once the angle of the ankles has been flexed. Keeping the torso extended, flex it on the hip joints until you grip the barbell with your arms well extended and so that the shoulders protrude slightly from the perpendicular to the rod.
And now it's time to do the exercise:

the first phase is that of the deadlift that from the starting position (A) you get to have the barbell up to below the knees (B) with only the intervention of the muscles of the lower limbs. The torso maintains its inclination with respect to the vertical and the head remains in line with it. 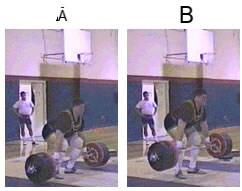 the second phase, that of loading, is performed by slightly extending the torso and bringing the barbell just above the knees (C). 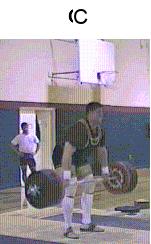 the extension phase occurs when opening the respective angles of the knees and hips (D) you get to have the barbell at the height of the pelvis (E). 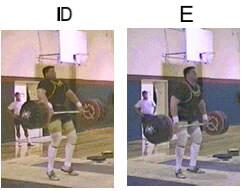 It should be borne in mind that from the deadlift phase to the final extension phase the arms do not intervene actively, but are limited to being a means of joining the body and the barbell.
At this point, the exercise can continue by retracing the path in reverse and returning to the starting position, or for the more willing it can continue and turn into a chest turn, i.e. in the extension phase (D) there is no stops bringing the barbell to the pelvis but through a small load on the part of the legs and through a flexion of the forearm on the arm (F) you get to have the barbell at shoulder height (G). 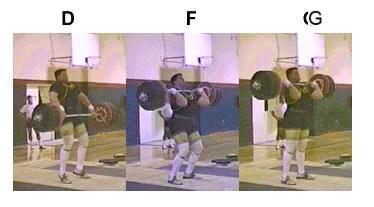 By analyzing the biomechanics of the gesture, it is easy to understand that it is more the muscles that are involved than those that remain at rest. For this reason, the deadlift and the turn to the chest are two exercises that are fundamental for those who want to increase strength and muscle hypertrophy. For those who struggle to develop good muscles instead of grinding series after series and exercises after exercises, my advice is to try these exercises, sure that the situation will improve, perhaps even in the short term.
Being an exercise that requires the use of consistent loads, it is necessary to know how to teach it well and to recognize immediately what errors may be in the execution. The most obvious mistakes are bending the back, keeping the bar away from the body and spreading the foot too wide, errors that affect the spine and make the exercise less effective.
Having said that, all that remains is to load a barbell and experience an incredible emotion that for too long had been closed in a box covered with dust and put into oblivion.