The dopamine diet: how to lose weight by eating the foods of happiness 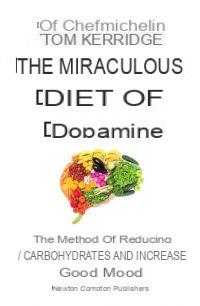 Tom kerridge is proud of the result obtained: he lost 76 kilos in three years bringing the foods of happiness to the table. "At 40, I had reached 190 kg: it is not easy to stay in shape when you spend many hours in the kitchen, between one tasting and another ", says the 2 Michelin-starred English chef, who often appears on TV programs dedicated to cooking and is a fixed presence on the Bbc Two channel of the British public service.

“I understood I needed to drastically change something in my way of eating, but none of the most popular regimes seemed suitable for me: they were all too drastic, restrictive, or just plain nasty. I knew my situation could not be solved with a lightning diet. I had to find a menu to stick to in the long run, a new healthy lifestyle with which replace my old (and bad) habits».

Tom Kerridge explains how he came up with his own tailored nutritional scheme in a book that, after becoming a best seller in Great Britain, is now also coming out in the country: The Miraculous Dopamine Diet (336 pages, € 10).

But what does this hormone have to do with fight against overweight?

If you feel pleasure, staying up to speed is easier

"Dopamine it is a neurotransmitter, that is a substance produced by the cells of the nervous system that regulates positive emotional sensations (it is in fact known as "the pleasure hormone") ", explains the doctor Diana Scatozza, medical specialist in food science.


"A its deficiency leads to a worsening of mood, with symptoms of fatigue, apathy and looking for food as consolation. The idea behind Tom Kerridge's nutrition plan is not wrong: most people struggle to follow a weight loss schedule for a long time due to the sensations of sadness, anxiety and nervousness generated by hunger», Dr. Scatozza comments.

The English chef then selected those "ingredients" capable of stimulate the release of the pleasure neurotransmitter. "There dopamine it is an extremely labile substance, which is why it cannot be assumed directly», Specifies the doctor Graziana D'Oro, nutritionist biologist. "However, it is possible to increase production by hiring precursors, ie the substances that the body uses to build it: the amino acids phenylalanine and tyrosine ».

Foods that help you feel good

The list of "Heroes of dopamine", as Kerridge calls them, it is fortunately nourished and varied: it goes on dairy products (cheeses, cottage cheese, whole yogurt and cream) to eggs; come on oily fish, such as salmon, sardines, mackerel (rich in Omega 3 and good sources of vitamin D) ai seafood.

Without forgetting the meat, which is never lacking in the chef's diet, as long as it comes from animals raised outdoors. In the menu
area of happiness there is also room for the seasonal fruit: Apples, berries and black grapes contain quercetin, an antioxidant that helps the brain counteract the loss of dopamine.

Other protagonists are the nuts (almonds, hazelnuts, pecans and walnuts), which help keep neurons in excellent shape, and then vegetables and spicy foods. «Recipes that use chili peppers do not increase dopamine levels, but promote the release in the brain of endorphins, the body's natural pain reliever that gives a feeling of well-being and contentment, ”says Tom Kerridge, backed by his experience in the field.

Keep your carbohydrates in check

“When I decided it was time to go on a diet and I started to research, I realized that, first of all, I absolutely had to give up alcohol (caloric and harmful to health) e reduce carbohydrates (consumed in excess promote the release of insulin which turns blood sugars into fat), ”Kerridge recalls in his book.

In fact, his diet is high-protein: no pasta, rice, grains. Foods that contain tyrosine and phenylalanine are meat, fish, cheese, as we have seen.

"Sugars, whether simple or complex, have been banned by the English chef also for their" negative "effect on mood: as soon as we consume them we feel euphoric, but when they start to drop we feel tired and nervous, in a continuous ups and downs that destabilize us, hindering our desire to lose weight », says Dr. Scatozza.

Don't do everything your own way

In his book Tom Kerridge does not propose a diet plan with precise menus. Suggest what are the foods to prefer and most importantly, it provides lots of chef's recipes to cut calories without giving up the pleasure of the table.

"But be careful," warns our dietician. "If you need to lose more than 10 pounds it is better that you rely on a specialist. Or, at least, that ask your GP for advice. Before starting any type of weight loss regimen it is good make sure you are in excellent health: check blood sugar, cholesterol, liver and kidney function. We have repeated it several times on: exceeding with protein foods causes ahigh production of toxins (nitrogenous waste) which in order to be eliminated force the organism to a super job. In short: ok to focus on foods that stimulate the production of dopamine, but always accompanying them with whole grains and legumes. The advantage will be twofold », concludes Dr. Scatozza. "We will fill up on fiber, which slows down the absorption of fats and sugars, and tryptophan, which promotes the secretion of serotonin, our feel-good hormone."

Audio Video The dopamine diet: how to lose weight by eating the foods of happiness
Diet: lose weight at 60 ❯

add a comment of The dopamine diet: how to lose weight by eating the foods of happiness