The devastating environmental impact of meat in a new shocking study

Avoiding meat and dairy products is the way to reduce our impact on the Earth. The new confirmation comes from one of the largest studies ever carried out, conducted by the University of Oxford and the Swiss Agricultural Research Institute Agroscope.

The dossier confirms the huge footprint of livestock farming for the food industry. A fact above all: meat provides only 18% of calories and 37% of proteins but occupies 83% of agricultural land, producing 60% of greenhouse gas emissions.

Researchers from Oxford University and Agroscope have created the most comprehensive database on environmental impact, taking into account a number of factors including land use, pollutant emissions underlying climate change, the need for fresh water, water pollution and air pollution.

The research looked at nearly 40.000 farms and 1.600 processors, as well as various types of packaging and retailers. This allowed scientists to assess the environmental impact of 40 foods representing 90% of everything eaten in the world, also taking into account different production practices and geographical areas (119 countries).

“Two things that look the same in stores can have hugely different impacts on the planet. We often don't know when we make choices about what to eat " he said Joseph Poore of the Department of Zoology and the Oxford School of Geography and Environment.

According to the study, without the consumption of meat and dairy products, the use of global agricultural land could be reduced by 75%, an area equivalent to the United States, China, the European Union and Australia combined. Additionally, plant-based diets reduce food emissions by up to 73%. This cut concerns not only greenhouse gas emissions, but also acidifying and eutrophicating ones that degrade terrestrial and aquatic ecosystems. Fresh water withdrawals, with a vegan diet, also decrease by a quarter.

For example, beans, one of the most low-impact foods, but also peas and other vegetable proteins, give rise to only 0,3 kg of CO2 equivalent (including all processing, packaging and transport processes) but use only a square meters of land for 100 grams of protein.

Aquaculture, which is assumed to have relatively low emissions, can emit more methane and create more greenhouse gases even than "polluting" cows.

The graph below shows the environmental impact of 9 animals and 6 plant products on a sample of approximately 9.000 farms around the world. 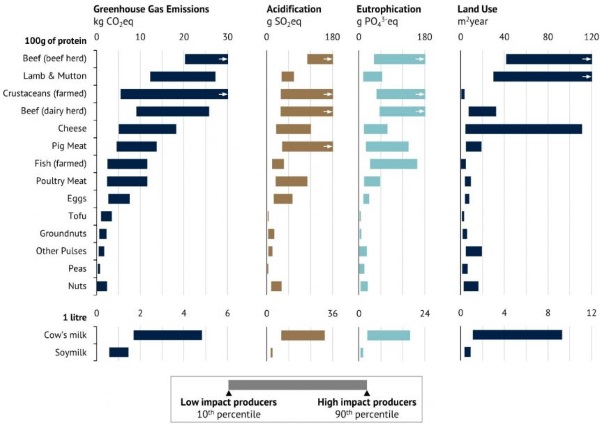 Researchers show that we can use the information to hypothesize a second scenario. Reducing the consumption of animal products by 50% by avoiding the producers with the highest impact, for example, would cut greenhouse gas emissions by 73%. 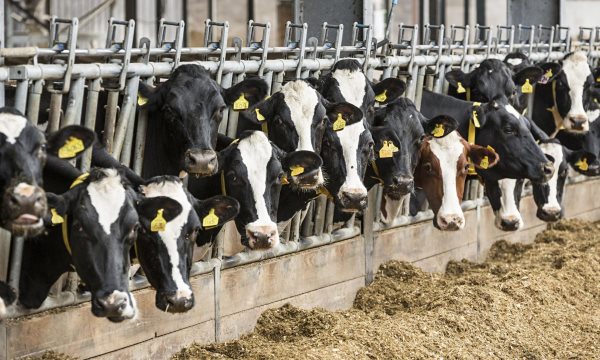 New technologies can help, including recommendations on how environmental impact can increase productivity, but with limitations. Specifically, the researchers found that variability in the food system fails to translate into animal products with lower effects than plant equivalents. Eg, a liter of cow's milk low impact uses almost twice as much land and almost generates the double the emissions of a liter of soy milk.

A diet without animal products, therefore, offers greater environmental benefits than the purchase of meat or dairy products, even sustainable ones.

Yet another confirmation that demonstrates how the consumption of meat and dairy products is far more harmful to the environment than that of plant products.

The study was published in Science.