The clock diet: what it is and how it works 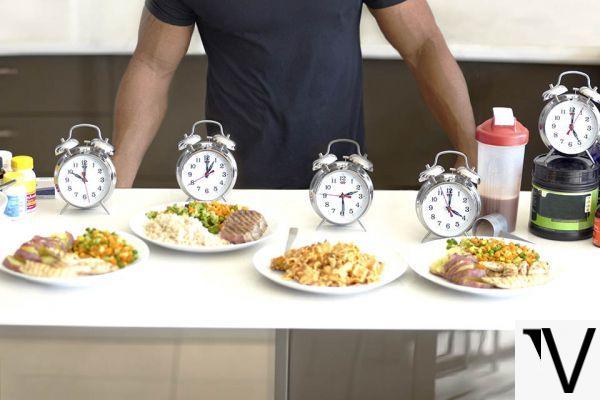 Larks or owls are born (Anglo-Saxon scientists have defined "larks" the morning people, "owls", the more nocturnal ones). Then, the habits of life can change our internal clock and make us, for example, less early risers or more night owls. Retrieve theinternal clock, however, it is important for the well-being of the whole organism, even when it is desired lose weight. Plus the la diet follows our biorhythm, the greater the results on the line. But let's try to understand better what it is.

The unregulated diet sends the hands (and the scales) haywire

"Various aspects of current life are compromising the 'natural' rhythms of many people," he stresses Roberto Manfredini, professor of internal medicine at the University of Ferrara, in various curricula and authoritative scientific publications dedicated to chronobiology.

«For example, the excessive use, often prolonged into the night, of the smartphone has provoked an increase in cases of insomnia, especially among the youngest who are always attached to their mobile phones.

Also an meal too rich it can shift the biological clock, not to mention the increasingly intense lighting of the cities which increases the number of urban owls (in the countryside, thanks to the greater presence of completely dark areas at night there are more larks).

Sometimes desynchronization it may depend on the type of job: there are professions that involve frequent air travel, with the known symptoms of jet-lag, and others (doctors, nurses, workers) in which night shifts impose a deprivation of hours of rest, which is often followed by a tendency to eat in incorrect way ".

Even the hectic life alters the rhythms of the organism

"Lo stress modifies the physiological trend of blood pressure, body temperature, heart rate, hormonal secretions ", explains Marie borrel, author of the book The secrets of chronobiology (Sperlin & Kupfer). And what about the effects of the time change? But if the external conditions are often not very modifiable, it is our task to respect the internal clock as much as possible. Or try to move its hands.

Put the internal tick back in place with the right foods

"The light is the main synchronizer, so much so that it is used for the treatment of various ailments, including seasonal depression, ”explains the French expert. "But a similar role is also played by nutrition.

La regularity in the quantities and times of meals is essential for the good functioning of our biological clock: avoid busting the first place secretion of hormones involved in the regulation of the hunger-satiety relationship, such as ghrelin (which in the morning tells the brain to give the order to eat) and leptin (which, after each meal, tells the central nervous system to silence the appetite) ».

It should not be forgotten that what we put on the plate can be more or less suited to the needs of the organism, which vary according to the time and seasons. «The same food is digested and assimilated differently in the morning or in the evening», explains Marie Borrel.

"These differences are linked to the production of digestive enzymes, to the secretion of hormones that intervene in the assimilation processes, to the availability of the cells that line the walls of the small intestine, where the nutrients pass into the blood."

Eat fat in the morning, protein at lunch, carbohydrates in the evening

«Upon awakening, the body craves fatty foods to regenerate cells, more protein for lunch to keep your attention awake during the afternoon, while in the evening it favors dairy products and cereals, capable of inducing relaxation.

The key rule: the more we sit at the table at regular times, the more balanced the production rhythms of hormones related to food are". Studies on astronauts have shown this. In space, in the absence of synchronizers such as the alternation of light and dark, our biological clock loses its external reference points (including the normal succession of meals). Digestion and assimilation of nutrients slow down, the stimulus of hunger disappears and little by little the desire to eat passes. The loss of muscle mass of those who participate in space enterprises depends not only on the absence of gravity, but also on the profound changes in the metabolism of proteins whose rhythm is deteriorated.

If you want to lose weight, stick to your watch

Taken for granted that the assimilation of nutrients is influenced by the time, if you want to lose weight successfully you have to do only one thing: adopt the rules of food chronobiology, which means having a "rich" breakfast in the morning, a protein lunch, a hearty afternoon snack and a light dinner.

Audio Video The clock diet: what it is and how it works
Diet: lose weight at 60 ❯

add a comment of The clock diet: what it is and how it works